Share All sharing options for: New logo puts the dragon in 'Dungeons & Dragons'

Dungeons & Dragons is getting a big rule overhaul this summer, and its logo is getting a revamp of its own to go along with it. Unveiled last week, the new D&D logo is what'll be accompanying materials for the classic role-playing game's fifth edition. The logo does away with the cartoonishly medieval lettering and textures present on the prior few versions and — reflecting current trends — tidies it up into a much neater, cleaner design that still includes enough flair around the edges to get across the series' fantasy theme.

The ampersand is a return to formThe most interesting aspect of the new wordmark isn't the words though: it's the ampersand between them. According to Brand New, D&D publisher Wizards of the Coast actually hired an outside design team for the creation of the ampersand alone, while its parent company, Hasbro, handled the words. The result is a clever transformation of the symbol into a looping dragon breathing out fire — a more-than-appropriate centerpiece for the game's logo.

Unfortunately, Brand New reports that Hasbro took a very classic and straight design of the dragon-ampersand created by the outside team and coated it with the 3D chrome look that it's using on the final version. It's a good bit tackier that way, but you may not have to look at it everywhere: the core rulebooks for the next version of the game feature an abbreviated logo that just reads D&D, and the ampersand is present in a flattened red. The ampersand is also front-and-center, suggesting that it alone may be used as a way to identify new D&D products. 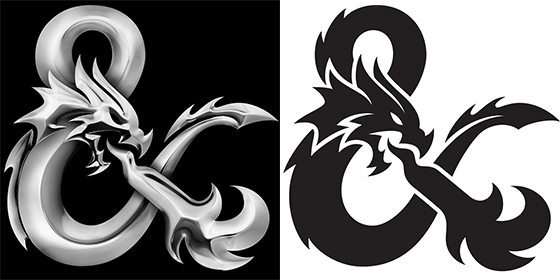 Left: The final D&D ampersand. Right: The version created by designers at Glitschka Studios, according to Brand New.

While the ampersand bears more than a passing resemblance to Guild Wars 2's logo, which transforms its "2" into a fiery dragon, D&D's new ampersand is actually a return to form for the game. It's been using dragons as ampersands for the past several editions — they've just been far more unintelligible. Go back to Advanced Dungeons and Dragons' second edition and other versions in the 1980s, however, and you'll find that the ampersand actually has a fairly similar look to what it's come back to today. An almost identical dragon-ampersand is present on the second edition of AD&D's core rulebooks, though its style feels distinctly more retro at this point. That logo also features simpler typography, though the new edition's logo still feels much more modern.

D&D's logo has been changing regularly alongside notable releases of the game, and the next big one is coming up this summer. The new version attempts to blend more roleplaying elements into the (arguably overly) streamlined mechanics introduced in 4th Edition, while winning back players who have abandoned ship to other games, particularly Pathfinder. A starter kit will be released July 15th, and the core rulebooks will follow over the next four months. 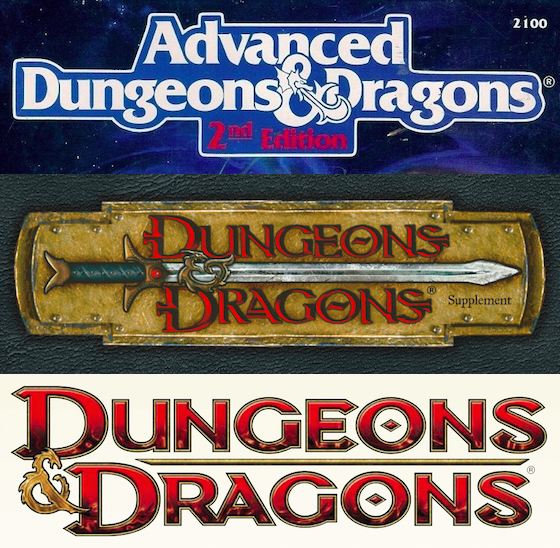