Can low prices do for Windows tablets what they did for Android tablets?

By all accounts, Windows tablets have yet to catch on in the mainstream market in the way the iPad or smaller Android tablets have, despite efforts from numerous manufacturers including Microsoft itself. But that isn't stopping tablet makers from pressing on, and today Toshiba released the Encore 2, its latest Windows 8 tablet effort. The Encore 2 comes in two sizes — 8-inch and 10-inch — and runs the full version of Windows 8.1, complete with support for legacy desktop apps. Toshiba is taking the same strategy that made customers first take notice of Android tablets: it's pricing the Encore 2 at $199 to start, a drop of $130 from last year's model and lower than similar efforts from Lenovo and Dell.

Android tablets didn't get much traction with customers until the Nexus 7 came along in 2012 at a starting price of $199. The Nexus 7 offered a "good enough" tablet experience at a price far enough below the iPad that it was able to easily become the most popular alternative to Apple's tablet. Similarly, Toshiba's Encore 2 promises to be a fast and responsive tablet that doesn't break the bank.

The base Encore 2 comes with an 8-inch, 1280 x 800 pixel display, quad-core Intel Atom processor, 1GB of RAM, 32GB of storage, and support for microSD cards. Toshiba says that its battery should last 8 to 10 hours before needing to be recharged, which is right in line with an iPad or Nexus 7. For $70 more, the larger, 10-inch model comes with the same 1280 x 800 pixel resolution and internal components as the 8-inch model. Toshiba will also sell options with more RAM and internal storage for $50 to $80 more than the base prices. All of the tablets come with one year of Office 365 personal for free and support Toshiba's Wireless Display technology for mirroring the tablet's display to a larger screen. 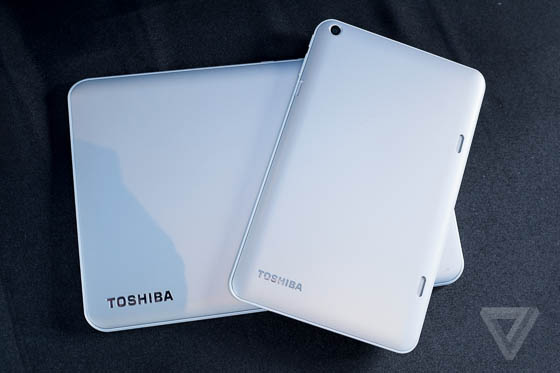 With a relatively low resolution display and basic specifications, the Encore 2 likely won't ever be a powerhouse tablet. But that doesn't seem to be the point — its hardware is good enough to make Windows 8 and most of the apps available run smoothly and the price is low enough to not be an instant deterrent to tablet shoppers. (For those that still find $199 too much to spend on a tablet, Toshiba has also announced the Excite Go, a 7-inch Android tablet priced at $109.)

Whether or not Toshiba will be successful in replicating the success of Android tablets with its low-cost Windows tablet remains to be seen, but buyers will be able to make their decisions this July, when the Encore 2 is available in stores.