How does LG's supercharged G3 stack up against the best Android phones?

Share All sharing options for: How does LG's supercharged G3 stack up against the best Android phones?

With LG's official launch of the G3, all major Android manufacturers have now unveiled their flagship smartphones for 2014. HTC has the One M8, and Samsung is of course garnering the most buzz (and sales) with its Galaxy S5. In many ways, it's a battle reminiscent of the one we saw last year when the G2, original One, and Galaxy S4 squared off. Samsung destroyed its rivals in that round — assuming you still believe the company has legitimate foes. But LG is hoping to establish its place in the smartphone race by leaping ahead on hardware specs instead of matching Samsung stride for stride as it did last year. The G3 has a gorgeous, super high-resolution display and a camera that focuses with lasers. Are these factors and others enough to help its cause and give the new flagship a chance? Let's take a look.

LG wins. Let's call a spade a spade. The G3's Quad HD display blows away its mainstream competition; both Samsung and HTC opted to stick with the tried and true 1080p display for their phones this year. But LG is apparently determined to push forward. That's a bold move, since it's not exactly clear what benefits the G3's 2560 x 1440 resolution will bring — or whether consumers will truly be able to discern any difference in the first place. There's also the question of battery life. Can the G3 put forth the same impressive longevity as its predecessor while pushing so many pixels?

A breakthrough display, but will your eyes be able to appreciate it?

But you can't really go wrong with Samsung or HTC in this case. The Galaxy S5's Super AMOLED panel allows it to go into a unique, grayscale ultra power-saving mode that you won't get from the G3's LCD. And we didn't have any complaints about the HTC One M8's display when we reviewed it. But based on pure specs, LG wins this contest handily.

Last year, the G2 delivered an unexpected knockout with its fantastic 13-megapixel camera. It outperformed nearly every other Android smartphone on the market, though some would argue Sony was right up there with it. Still, that success has put pressure on LG to deliver a worthy follow-up for 2014. The G3 once again features a 13-megapixel sensor. This time the story is all about focus. LG has built in a laser autofocus system – the first time we've seen this sort of thing in a flagship smartphone. It measures the distance between the subject and the camera using a laser beam, and LG insists this helps the G3 snap shots in "a fraction" of the time required by other phones. The front-facing camera has also received upgrades in the form of a wider aperture and gesture detection. 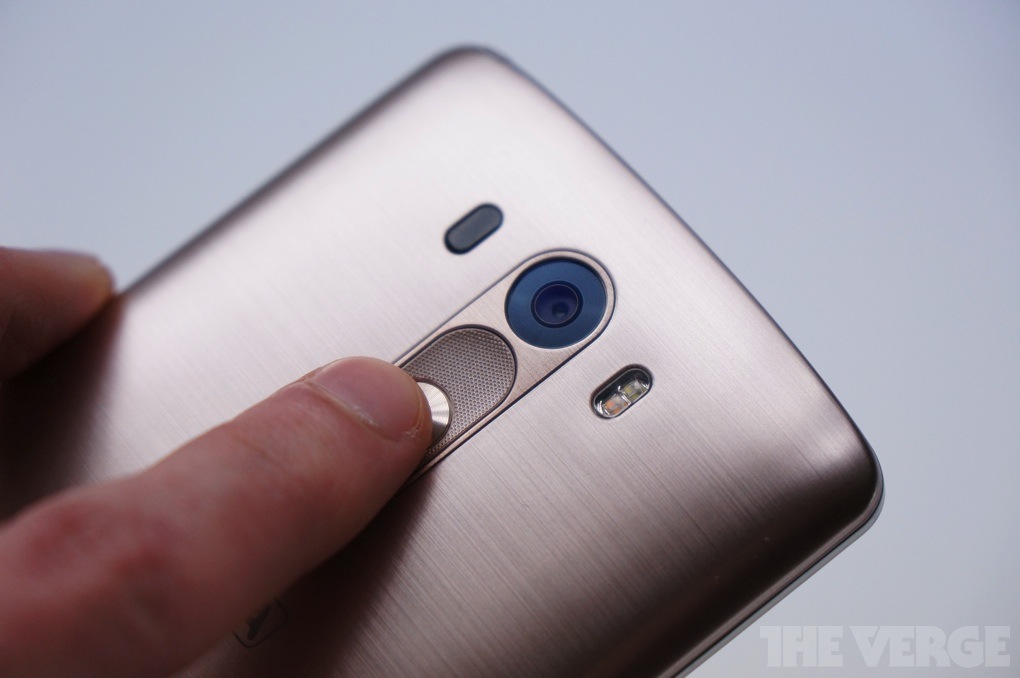 This could potentially be another area for LG to shine. The One M8's Duo camera system is lacking to say the least, and it wouldn't be difficult for the G3 to outclass it. Samsung's Galaxy S5 is another story. It delivers sharp and accurate photos while lending users more post-processing freedom thanks to its 16-megapixel sensor. Focus aside, if LG's camera merely matches what we saw from the G2 last year, this won't be an easy selling point against Samsung. And if a camera is the most important thing to you in an Android smartphone, you've probably already imported a Sony Xperia Z2.

HTC takes this one, and it's not close. Though it's a bit tall for our taste, the One M8's aluminum construction is unmatched in the Android world. This year it feels better crafted and even more cohesive than the original One; it's the most solid-feeling smartphone on the market today. LG has gone down the unfortunate path of building a device that looks like metal but isn't actually metal. It's a curious decision, particularly when the company could have easily gone a different route with brighter colors or some other hardware change. Doing so could have helped the G3 stand out from the competition and catch eyes on store shelves. LG's latest smartphone still has the buttons-on-the-back party trick going for it, but it's likely to blend in when tossed into a sea of other smartphones at Verizon, AT&T, Sprint, and T-Mobile.

Why build something that looks like metal if it's not metal?

Samsung can't keep up with HTC on build quality, but it owns its rivals in another key area: durability. The Galaxy S5's water-resistant build is an incredible perk that eliminates any worry or panic that normally follows getting your phone wet — either via unforeseen accident or when you need to use it in the rain. Sony has led the charge here with its Xperia phones; the Z2 can also endure a brief swim, and it offers a more premium feel thanks to a glass backplate. It's hugely disappointing to see LG miss the boat entirely — especially when the G3 is still a piece of plastic.

Samsung and HTC have both (finally) learned how to customize Android in a way that doesn't ruin or bog down the overall user experience. Their respective TouchWiz and Sense "skins" have grown leaner and faster than ever before in 2014, and each gives users more flexibility to turn off or hide whatever they don't like.

We can only hope that LG learned a similar lesson. Last year, the G2 shipped with what we described as "the heaviest and most overwrought software" we'd ever seen. LG blatantly tried to follow Samsung — a terrible idea at the time — by overloading the device with gimmicks and needless features. It's hard to gauge what we're in for with the G3 at this point. At worst, the new Smart Notice personal assistant may prove annoying: LG says it will bother remind you about missed calls, apps you're not using, and any large files that are eating up storage space. But at the same time, it's promising a simplified user experience, so we'll need to wait before we can make a call on this one.

This category is basically a wash, but that's great news for you, the smartphone buyer. All leading Android phones now use the latest and greatest Snapdragon processors from Qualcomm. They're all perfectly capable of running any app or any game that you throw at them. Many apps and games at the same time, even. A powerful processor is obviously important, but it's no longer a distinguishing factor between flagship Android devices. They're all capable and then some. LG does beat out Samsung and HTC in the RAM category; the G3 contains 3GB while rivals offer 2GB. Sony's Xperia Z2 also features 3GB of memory. But RAM hasn't yet proven to be a bottleneck, at least for a vast majority of users. 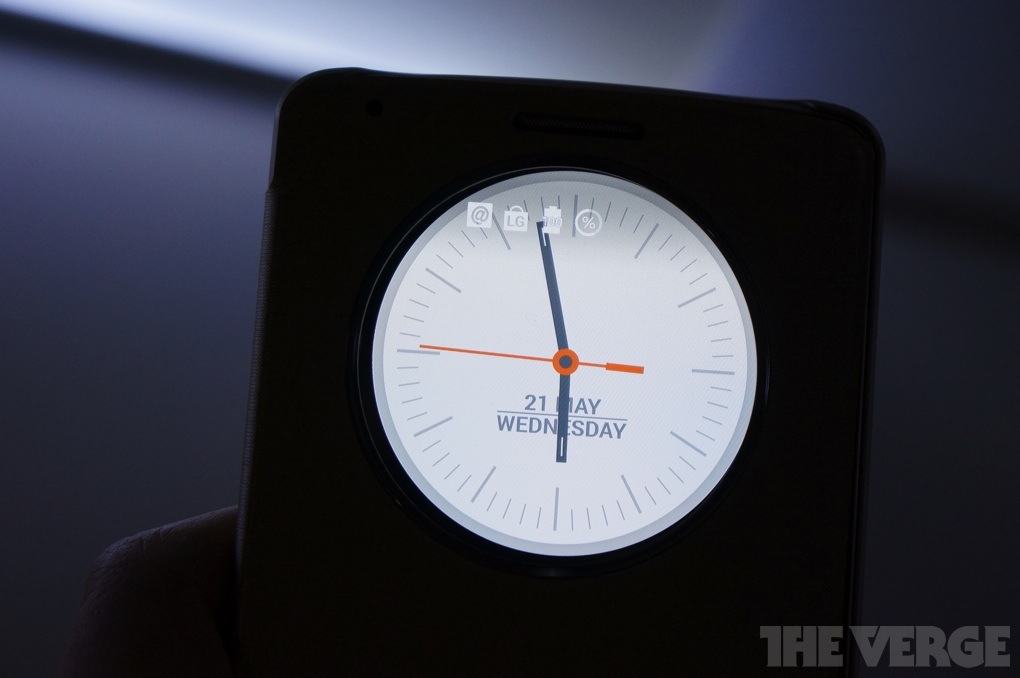 All the cards are on the table. Now the choice comes to personal preference — and how many millions these companies are willing to sink into marketing. LG, HTC, and Sony each have their own loyal and passionate base of users, but the goal is to catch mainstream momentum and give Samsung a legitimate fight. That's the same quest these companies have pursued for years, though, and the clock is already ticking. By and large, consumers are choosing to stick with the reigning champion. LG is hoping its overpowered phone can lead to an upset.