The camera in LG's new G3 flagship smartphone is pretty special. Not for its 13-megapixel sensor or optical image stabilization — both good things to have — but for being the first among phones to feature a laser autofocus system. Here's how it works.

The moment you enter the camera app, the G3 starts emitting a cone-shaped laser beam from a window just to the side of the camera. The phone then measures how long it takes for the light to bounce back to it and thus gets a reading of how far away the subject of the photo is. It's the same thing that bats do with sonar, only it's done with lasers projected at an infrared wavelength (and therefore invisible to the human eye).

Lasers developed for robovacs find their way into smartphones

Curiously enough, LG didn't develop this technology for its current purpose. The lasers in question were first researched for use in the company's line of Hom-Bot robotic vacuum cleaners, however they were never implemented there. Seeing a synergistic opportunity, LG's mobile team picked them up and made them an integral part of what the company claims is the fastest camera in a smartphone today.

LG combines the constant flow of range information from the lasers with a conventional contrast-detection autofocus and extra algorithms like face detection. It's a hybrid system that will automatically give precedence to the more useful data: LG says the laser helps more in low-light situations and with nearby subjects, but if it can't give a reliable reading it might be discarded in favor of the standard focus method. Still, the company claims an autofocus time of just 276 milliseconds, faster than the blink of an eye. 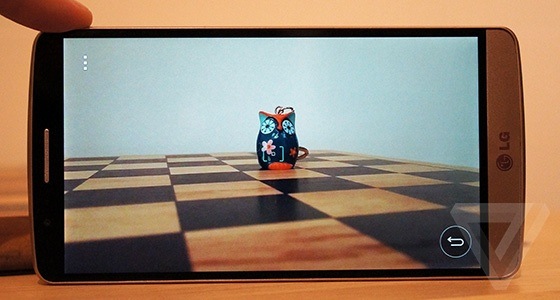 The camera UI could be described as utilitarian if there actually was any. LG's hidden away all controls and left the user with just two buttons: one for the menu and the other to exit the app. By default, images are captured and focused when you tap anywhere on the screen. This software setup is an overt call to challenge the speed and precision of what LG believes is the best autofocus system on the market.

In practice, the G3's camera isn't tangibly faster than the speedy shooters on the iPhone 5S or HTC One. Its headline number of less than a third of a second to capture an image is the best case scenario, and pictures often take longer to complete. Even when comparing cameras at their fastest, the G3's advantage is of mere milliseconds and therefore too moderate to be noticeable. Still, it's a cool innovation, lasers are involved, and it makes LG's best that little better.