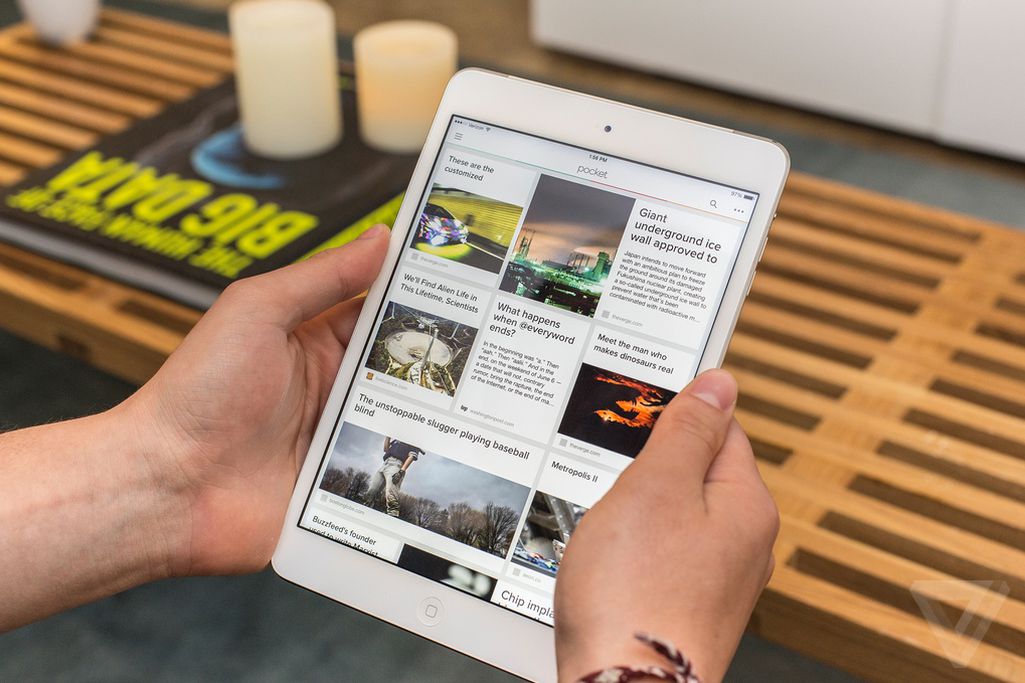 Pocket, which lets you save articles and videos to view later, is introducing a paid option. Pocket Premium, which offers power users new features for archiving, searching, and tagging their saves, launches today for $5 a month or $44.99 a year. Seven years after the company began as a bookmarklet, and two years after making its apps free to build its base of customers, the save-for-later service says it's now big enough for a "freemium" business model to make sense. At a time when webpages routinely disappear without warning, Pocket is making a bet that users will pay for peace of mind. Whether the company is right will determine its fate as an independent business.

Starting today, Pocket users can purchase a premium subscription through its website, Apple's App Store, or Google Play. It's a model that closely resembles that of Evernote, which once tried to acquire Pocket and has remained a partner. Most freemium services only manage to get 5 percent or less of their users to pay for bonus features. Instapaper, Pocket’s best-known rival, has long offered a subscription for users who want full-text search, third-party integrations, and no ads, among other features. But Instapaper remains a fraction of Pocket’s size — it had 2 million users at the end of 2011, the last time it disclosed that number, and its Android app has fewer than 50,000 installs. Instapaper, which was created by Marco Arment, is now owned by Betaworks, which says it wants the app to become “the Dropbox for web content.” 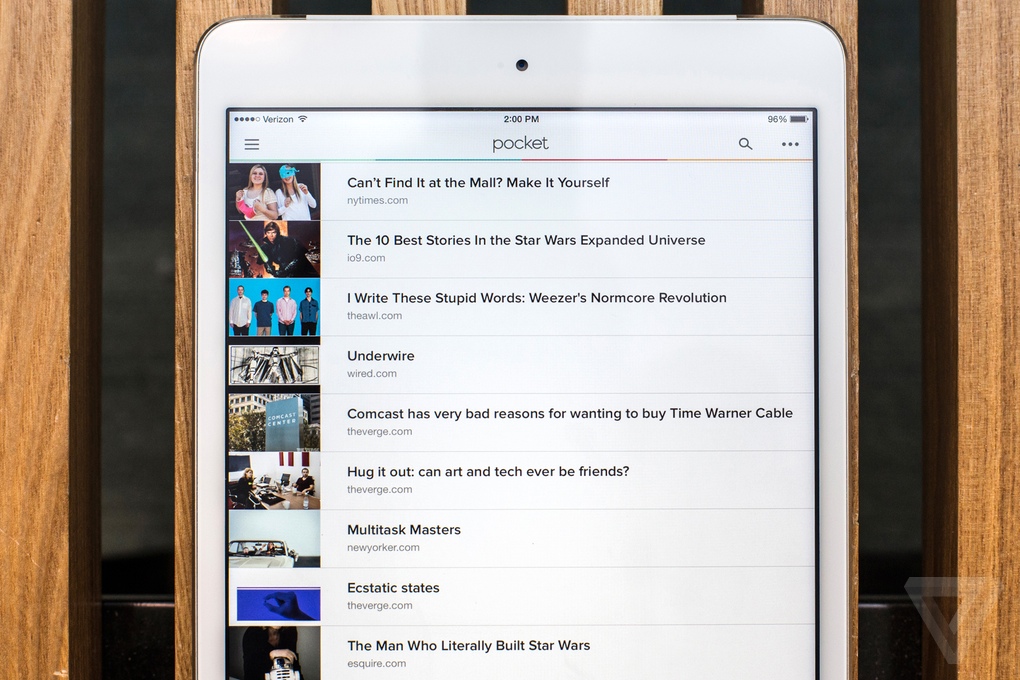 Until now, Pocket hasn't had the scale to support a real subscription business. But the company now has 12 million registered users, up from 9 million a year ago, and founder Nate Weiner says that the problem he set out to solve in 2007 is only growing.

That problem is that we increasingly want to time-shift the internet the way we time-shift television. Pocket believes that as the number of screens we own grows, we'll need a service to move all those articles, videos, and other web pages around. To date, the company's users have saved 1 billion total items using Pocket — and half those saves came over the past year. "That rate is rapidly increasing," Weiner says. "We have more and more people relying on Pocket to help them read and watch all the content they save. It’s really important that we start being able to build on top of that product with features that help them do that better and better, and support this library that they've basically been building."

Link rot is a more insidious problem than most people realize

To date, the "library" that users have been building in Pocket is just a collection of URLs. The service caches current articles on your device to let you read them offline, but archived materials are saved simply as links. And if those links go bad, the content disappears with them. This effect, known as "link rot," is a more insidious problem than most people realize.

A 2003 study found that the half-life of a link cited in a scholarly article was 1.5 years. Moreover, 98.3 percent of all web pages change in some way after six months. The Wayback Machine at the Internet Archive doesn't save everything. "What I fear is that the entire web is basically becoming a slow-motion Snapchat, where content lives for some unknowable amount of time before it dies, lost forever," the writer Felix Salmon said last year. "Sites like archive.org can’t possibly keep up; and the moguls who own most of the content online are simply not invested in the ideals of the link economy."

Pocket Premium solves that by saving a copy of the page forever, turning the service from "read it later" to "save forever." Original copies of web pages can be found through the archive tab in Pocket's apps. Weiner says that two years since the former Read It Later rebranded itself as Pocket, users are starting to realize that some of the links they have saved no longer exist. "People don’t always understand that links just disappear," he says. "We want to make sure that stuff is preserved for people." The idea is not original — Evernote and Microsoft OneNote, among others, also create tools to help you save web pages. But few of those services excel on mobile devices, where Pocket already integrates with 700 other apps. Pocket's service will let users create permanent libraries of the things they find interesting with just a couple taps on their phones. 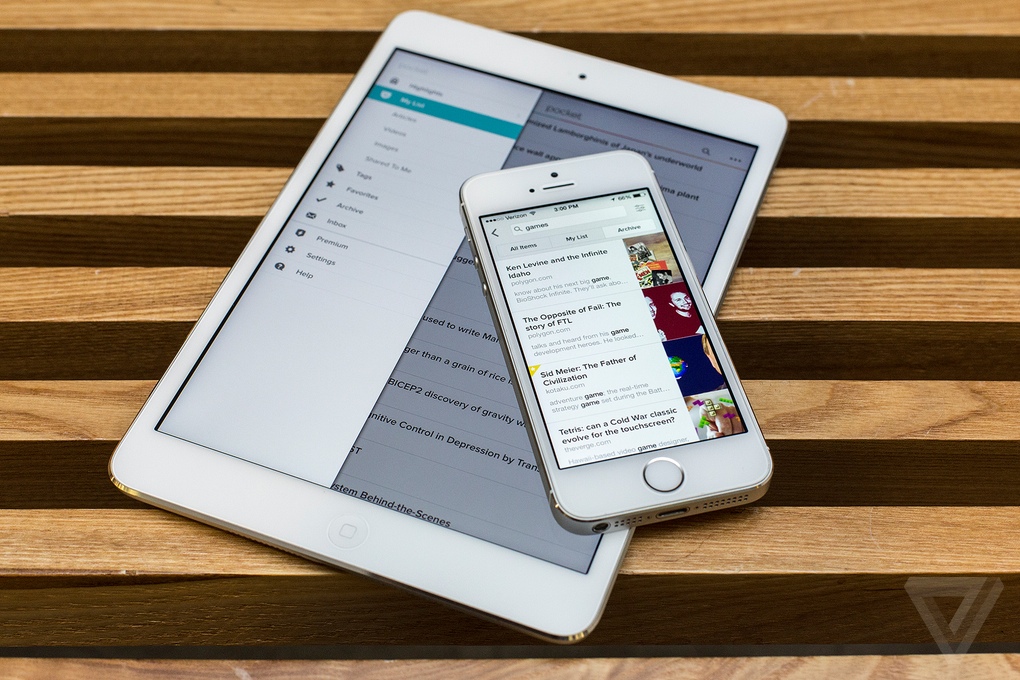 Of course, a permanent digital library isn't much use if it can't be searched. Pocket's existing search covers only articles' headlines and URLs. The premium version lets you search the full text of the article, along with functions to let you search by author, by topic, or by tag. "Permanent doesn’t matter if it’s impossible to find the needle in the haystack," Weiner says. For the true obsessive-compulsives who use Pocket, the premium version will generate suggested tags for your saves to help you find them later. A review I saved of the new OmniFocus 2 for Mac correctly tagged itself with "apps," "iphone," "mac," and "tech," though it's hard for me to see how those tags would be more useful than simply searching the app's name. (The tagger isn't perfect, either. A Tumblr page with a SoundCloud embed from some DJs I like suggested "pics," "nswf," "email," "tech," and "angular." Nope!)

"Please let us pay you."

For Pocket's devoted users, the premium features have another benefit: they ensure the service continues to exist and improve. Pocket has been operating without revenue since making its apps free, and some users were starting to worry. (The company has raised $7.5 million from Google Ventures and others.) "Our No. 1 feature request for the past three years has been 'Please let us pay you,'" Weiner says. "There’s a huge contingent of our user base that just wants to be able to support us and knows that it helps us be a sustainable company."

Pocket also believes a premium feature set will help it grow. When it charged money for its apps, the top five days for new users came when the company was having a sale. With a premium offering, Pocket can now strike partnerships with other companies to give away premium features. A carrier, for example, could make a deal with the company to offer a year of Pocket Premium. Evernote and Dropbox, which Pocket consulted about its premium offering, both have used that strategy to grow their businesses.

Still, there's no guarantee that the first iteration of Pocket Premium will prove a hit with its users. There are free alternatives to the feature set that may be more familiar to the hardcore archivists likely to be most interested in the service. The primary use of Pocket has been save items to read a few hours or days later, and it's not clear how much appetite there is for a feature that becomes really useful only when the original link dies.

"It's important that we take the first steps into becoming a revenue-generating business."

But Weiner says that when Pocket surveyed its users, interest in a permanent archive was "off the charts." And the link rot problem will only grow more pronounced with time, he says. "Links don’t really start disappearing until one, two, three years into their lifespan," he says. "Pocket is now basically two years old. People are finally starting to hit some of these issues." Other ways of generating revenue are on their way, Weiner says, but users now once again have a way to support the service. "It's important that we take the first steps into becoming a revenue-generating business," he says. "Other things are going to take some time to build."