A good message to get, but will you see it in time?

Share All sharing options for: Lookout now gives you a play-by-play as thieves steal your phone

Did your phone just get stolen? Chances are you won't know until after it's happened. According to Lookout, a company that's in the mobile security business, you were probably at a bar or restaurant and will never see the device again.

The reason is simple: stolen phones are big business, so much so that states are pushing and even passing bills to require countermeasures like locking, wiping, and completely disabling the device, right out of the box. Lookout has made its business selling those features over the past seven years, and it's got a new set of tools that will alert phone owners exactly when it thinks their cellphone is being stolen.

Credit card companies have used these techniques for years

Unlike a wallet chain or a location alarm, Lookout has created "triggers": behaviors that are atypical to how people usually interact with their devices. That includes things like the ejection of a SIM card, an incorrect password entered several times, or someone disabling the device's administrator on Android. Other settings cover more pedestrian things, like if you've toggled airplane mode, or tried to turn the device off. Credit card companies have been doing the same thing for years, looking out for things that seem unusual as part of their anti-theft and fraud-prevention programs. This is no different.

"What we found are that there are common actions a thief takes when they steal a phone that indicate when the device is in someone else's possession," says Lookout's iOS lead product manager David Richardson. "There are lots of ways to tackle this, like blacklists and kill switches, but we're using software."

If one or more of the triggers occur (and you can pick which ones you want enabled), Lookout's software will automatically send you an email alert that says what it's detected, complete with a photo from your phone's front-facing camera, the device's last-known location, and all sorts of options to lock the phone down completely using other Lookout services. In that sense, none of this has been designed to keep your phone from being stolen, but will give you a full rundown of what happened, as well as information that may lead to a possible recovery.

"The idea was to be over-verbose, and make it so you know exactly what happened," says Greg Lou, the lead product manager for Lookout's Android app. "If we sent you an alert for each of these triggers, you might get confused."

The reports also offer shortcuts for calling carriers to cancel service and locking down that device so it can no longer be used on the network. These are things people often need to dig for, or can neglect doing right away, says Richardson.

Not everyone gets the feature

The new feature isn't for everyone, and can be limited depending on what phone platform you're on. For one, you need to be a subscriber of Lookout's premium service to get access to the triggers. Users on Apple's iOS are also limited to just receiving alerts if the SIM card is taken out, or if the phone is put in airplane mode. That means you won't get a nice shot of your phone thief's face, or know if someone's trying to brute-force attack their way into your lockscreen (something Apple has built-in controls to thwart).

One major wrinkle in this plan: the key device you'd want to get an alert on if your phone was stolen would be in someone else's hands. The company's designed around that by sending out alerts by email that tell people exactly what's going on, including the phone's last-known location. However, it won't let you set these alerts up to go to another person — at least not yet. And it still requires that you make your way to another phone or computer to log into Lookout's website and make account changes. In many ways, that makes all of this good for a postmortem, but not a deterrent. 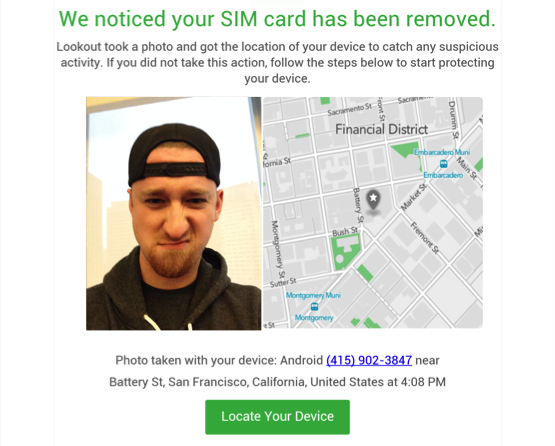 Lookout has 55 million users worldwide, though the company would not disclose just how many of those subscribe to its $2.99 per month or $29.99 per year premium service, short of putting the number in the "millions." Some of that number comes from T-Mobile subscribers on the carrier's Jump program, which includes the premium account as a freebie. The software also comes pre-installed on a number of Android devices on other carriers like AT&T and Sprint. Premium users will get access to theft alerts first; the company is also giving them to its non-paying users through September 30th, 2014 as long as they were signed up before today.

Lookout is one of many companies tackling smartphone security, a business that's grown larger on Android than iOS given the deep level of control app-makers get on the hardware. Apps like Cerebrus, Prey, Android Lost, and Google's own Android Device Manager offer tools to actively keep tabs on where phones are, then lock down and disable a device without it in-hand. Lookout is late to the game with these new triggers, but also offers things like real-time security scanning and data backup, part of a suite of services the company views as a more holistic security tool.

By comparison, Lookout on iOS is augmenting Apple's own Find My iPhone feature, which is a free service to remotely find, lock, wipe, and secure iPhones and iPads that go missing. Looking ahead, Richardson says he hopes it won't be like that forever. "None of this was possible in iOS 6," he says. "Every single time a new version of iOS comes out, we are always taking it apart and figuring out all the new stuff, and that's where a lot of these new feature ideas come out of."