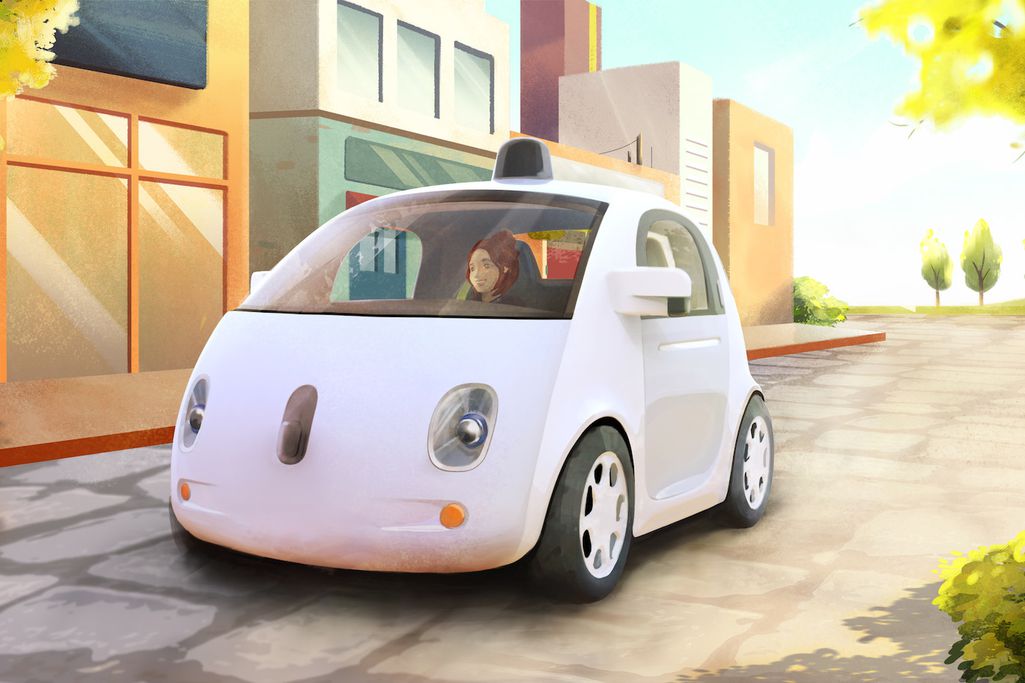 Speaking about self-driving cars last September, Elon Musk preached caution. The man who wants to send us all to space and shuttle us between cities at outrageous speeds told the FT that "my opinion is it's a bridge too far to go to fully autonomous cars."

Somewhere deep inside the secret labs at Google X, Sergey Brin must have read that and smiled. And then climbed into his tiny car — the one with a strange smiley face for a front and a noticeably missing steering wheel — and with a single button press instructed his car to drive him wherever billionaires go to cackle at the short-sightedness of other billionaires.

On Tuesday night, onstage at the Code Conference in California, Brin revealed an entirely new take on a self-driving car, one decidedly more ambitious than anything we've seen before. Google's as-yet-unnamed car isn't a modified Lexus. It doesn't just park itself. It's an entirely autonomous vehicle, with no need for steering wheels or gas pedals or human intervention of any kind. You can't drive it even if you want to.

The Google Car is fully electric, big enough for two passengers. It'll only go 25 miles per hour. Your involvement with the car consists of four things: get in, put on your seatbelt, press the Start button, and wait. While you're waiting, maybe check out the large screen in the center console, which shows the temperature and the time remaining in your journey but could easily display just about anything else. Like, say, a Chrome browser for catching up on your Gmail or watching YouTube while you ride.

Google's pitch must have sounded insane

Google's had trouble finding willing partners for its ambitious automotive project — it's always just hacked sensors and cameras onto existing vehicles, which creates a bunch of visibility and sensory limitations — which may be because what it was asking for was only just shy of insane. Nothing about this car is traditional: it has a front made of compressible foam, a flexible plastic windshield, and a dual-motor system that keeps the car running even if part of its engine fails. It's easy to imagine executives at GM balking at quite literally reinventing the wheel to help Google X with its latest moonshot.

But Google evidently found a willing supplier or two (Brin wouldn't specify) and it made a car that works. One that it will test 100 or so of in California, that it's already seated journalists inside and placed its employees in front of as it puttered around parking lots in Mountain View. 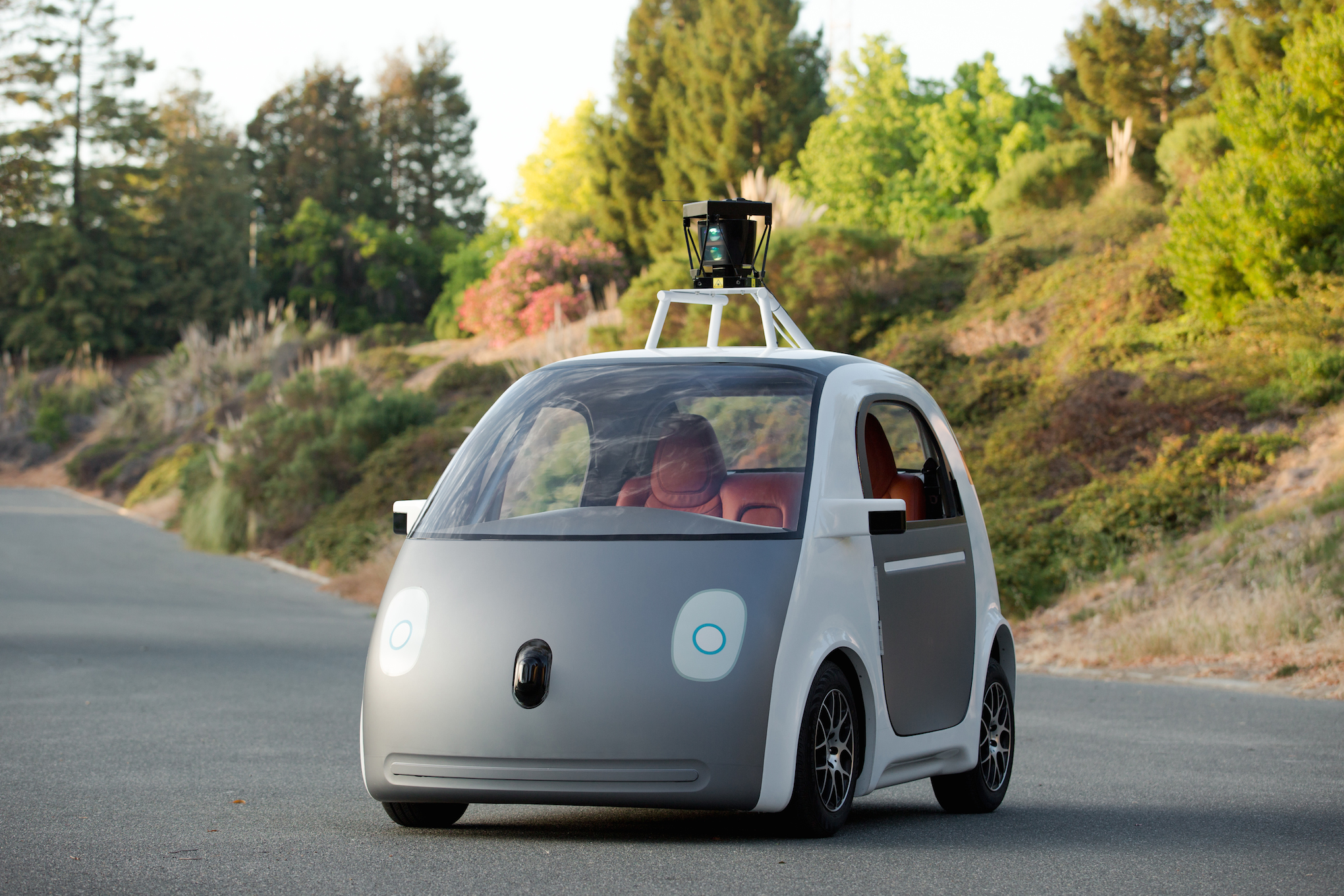 Self-driving cars are coming. That's essentially a given: the technology already mostly works, and nearly all automakers believe autonomous vehicles are both a good and feasible idea. They disagree only on the timing, though "by 2020" has become an increasingly popular refrain. The biggest remaining challenges appear to be regulatory rather than technological, as governments start to answer questions like who's responsible when a self-driving car gets in an accident.

What if we all sold our cars?

Rules in a few states (including California) now permit self-driving cars so long as there's a driver behind the wheel in case something happens, and other lawmakers around the world are quickly warming to the idea. There are important privacy issues at play here, too, and the extent to which Google might use self-driving cars for its own advertising and data-collection ends remains a big and possibly frightening unknown.

In classic Google fashion, though, Brin talked less about what the Google car could mean for Google and more about how it might change the world. What if we all sold our cars? What if every time we needed a car, we unlocked our smartphones and called for one with a single tap, and as soon as it dropped us off it went off to its next job? We'd need fewer parking lots, reduce our emissions, stop driving drunk, and get in fewer accidents. Those who couldn’t or shouldn’t drive – the blind, the elderly — could still get around. This is the future Brin imagines, one with huge ramifications on everything from the environment to the economy. And the cute little car he's been developing at Google X is the closest thing we've ever seen to making that idea real.

This is only the beginning, of course. Google's not shy in admitting its cars have trouble in rain and snow; they'll work nicely in a consistent and comfortable climate like Mountain View's, but the mountains of Lake Tahoe might prove another story. And they sure as hell can’t drift. And for Google's car to be the future of cars and not of golf carts, the company will need to solve for those and countless other problems around the world.

Questions and limitations still abound, but we're getting closer

Eventually it's going to work, though, even if by the time autonomous vehicles hit the mainstream they'll more likely have a Ford or Nissan logo than a Google Doodle. (Brin himself mentioned taking a "partnership approach" for the tech.) Google doesn't have the scale, the infrastructure, or likely the desire to enter the car market in a real way. But Google's hardware moves, from the Chromebook Pixel to Google Fiber to Project Loon, have never been about sales. They're about proving what can be done, about pushing the limits, about making us think bigger and differently about what's possible.

Even if only 100 ever see the road, Google's car will force lawmakers to finally figure out what happens when cars stop helping us drive and starts truly driving us. It will force automakers to think two steps further down the self-driven road than they had before. It will force customers to get used to the idea of not owning a car, and the notion that it's actually more convenient doing things the Uber and Zipcar way. It’ll teach us to think of cars as public transportation, a service provided for us. Even if we're years away from the wide availability of the technology it's now clearer than ever that's what a "self-driving car" really means.

Google’s not just trying to make cars that drive us around. It’s trying to reimagine what a car is for in the first place, to teach even Elon Musk to think a little bigger. And it might be just rich and audacious enough to pull it off.