The Defense Advanced Research Projects Agency, or DARPA, has announced the start of a five-year, $26 million effort to develop brain implants that can treat mental disease with deep-brain stimulation.

The hope is to implant electrodes in different regions of the brain along with a tiny chip placed between the brain and the skull. The chip would monitor electrical signals in the brain and send data wirelessly back to scientists in order to gain a better understanding of psychological diseases like Post-Traumatic Stress Disorder (PTSD). The implant would also be used to trigger electrical impulses in order to relieve symptoms.

DARPA has chosen two teams that will pursue different approaches. A team from the University of California San Francisco will use direct recording, stimulation, and therapy to take advantage of the brain's plasticity. Circuits that appear to drive pathology would be rewired, and eventually the patient could remove the implants. 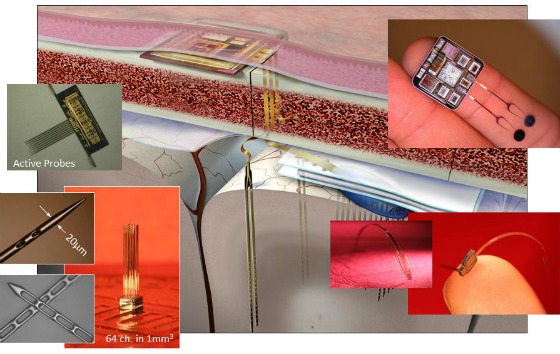 Artist concept of the chip next to photos of existing devices. Photo: DARPA

The team from Massachusetts General Hospital will attempt a "trans-diagnostic" approach to isolate elements that are common to psychiatric and neurologic diseases such as anxiety, memory failure, and delayed reaction time. Real-time brain recordings will trace pathological symptoms down to single neurons. If successful, this method will enable further testing that could lead to targeted treatment and diagnostics.

"DARPA is in the business of creating not just science, but new technologies," program manager Justin Sanchez said in a statement. "The neurotechnologies we will work to develop... could give new tools to the medical community to treat patients who don’t respond to other therapies, and new knowledge to the neuroscience community to expand the understanding of brain function."

It's very ambitious, but there is a lot to gain

The program, called Systems-Based Neurotechnology for Emerging Therapies (SUBNETS), is one of the first manifestations of a $100 million brain-mapping research initiative announced by President Barack Obama last year.

Current treatments range from talk therapy to medications to psychedelic drugs, but PTSD remains a major challenge for the military. The SUBNETS program is a typical DARPA undertaking, which means success is far from certain. But if it works, it could have a massive impact on the millions of sufferers of PTSD and other anxiety disorders that account for nearly a third of the country's mental health care costs.