'Kero Blaster' is 'Mega Man' for the iPhone age

'Kero Blaster' is 'Mega Man' for the iPhone age

Before the present explosion of indie games, there was Cave Story. A sprawling, wonderful Metroid-style 2D adventure, Cave Story was the sole work of Daisuke "Pixel" Amaya, who created the game in his spare time while working for a Japanese IT company. Almost everyone who played Cave Story fell in love with it, and the game was a strong influence on the current boom of auteur-led indie titles.

Pixel did everything himself — the graphics, the music, the programming, the story — and released Cave Story for free in 2004. There were freeware titles before, of course, but Pixel’s strong spirit of independence and stamp of authorship means Cave Story is as good a pick for the birth of the indie scene as any. Now he’s back with Kero Blaster, a 2D action game four years in the making that bears all the hallmarks of another cult classic.

You play a bipedal frog businessman who, while working for a company named Cat & Frog Inc., must violently remove mysterious monsters from the company’s teleporters. If Cave Story was Pixel’s Metroid, Kero Blaster is his Mega Man: it’s a much tighter, more compact game, with little exploration or exposition. Your amphibian protagonist shoots his way through a series of levels, fighting bosses and collecting weapons as he goes. Like Cave Story, Kero Blaster elevates simple ideas to a new level through its quirky storytelling, distinctly retro graphic style, and the overwhelming sense that it’s a singular artistic expression.

"I’m really easily influenced by anything," says Pixel, who was playing Metroid: Zero Mission for the Game Boy Advance along with little-known iOS game Astronot as he developed Kero Blaster. "I feel like various items in the game might feel like a bit of something from somewhere." The way you get a new weapon after defeating each boss is straight out of Mega Man, for example, but that’s not to call it a rip-off — Kero Blaster bursts with personality, from its breezy localization of an offbeat story to its cute, lo-fi art. It’s instantly identifiable as Pixel’s work, and stands apart from most revivalist indie games.

The iOS version deserves particular attention for its fantastic control scheme. Where many similar games fall apart with their virtual D-pad and buttons — just try a running, shooting jump on Capcom’s clumsy Mega Man 2 port — Kero Blaster uses an inspired system where you swipe to maintain fire in that direction, freeing your thumbs up to move and jump around. (The game is also available for PC, where it plays more traditionally.) "With the iPhone there is no way to tell if you're pressing a button, and there are a lot of casual users so I really wanted to make something that even beginners could use with ease," Pixel tells The Verge. "I've heard that a lot of virtual controller games are just so-so, but I have a lot of confidence in Kero Blaster." 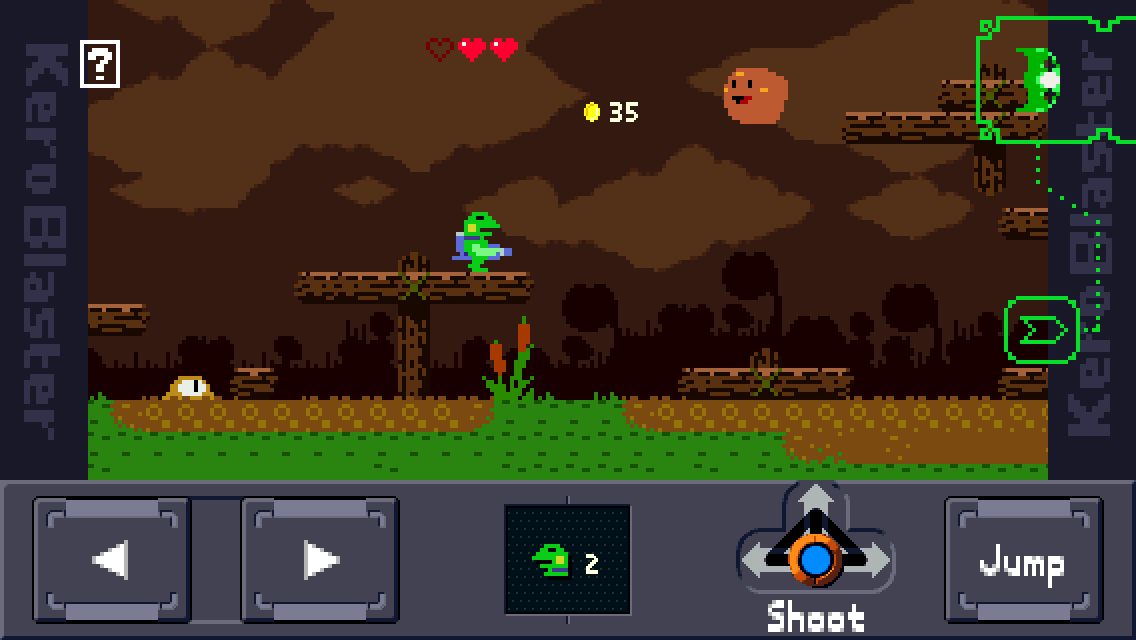 "Kero" or "gero" is the Japanese "ribbit," the onomatopoeia for the sound made by a frog — Pixel first unveiled the game as Gero Blaster at last year’s BitSummit event in Kyoto, but decided to give it a substantial revamp for what became Kero Blaster. "After [BitSummit] I continued working on the game, but started having all kinds of doubts," says Pixel. "So in the summer of 2013, I decided to make huge changes to the game." While the character and basic controls remained intact, the story, weapons, and map were all overhauled. Pixel decided to change the name to Kero Blaster so that players would "see it as a completely separate game."

"It's a little crazy trying to create a game to sell in 2 or 3 years."

Finding it difficult to concentrate at home, Pixel worked on the game at a local business incubator from "9:00 or 10:00 in the morning until 11:00 at night," later enlisting level design assistance from Kiyoko Kawanaka, whom he met at the incubator. Although Pixel’s salaryman days are over and he was able to work on Kero Blaster full-time, he feels he’s "still not cut out for creating a commodity" or dealing with the business side of development. "It's a little crazy trying to create a game to sell in two or three years, and it's impossible to keep up with the ever-changing gaming industry," he says. "I used to have this naive idea about creating and completing a game, but in the end, it just feels like you're circling around the same spot over and over again." He credits Kawanaka with helping him schedule and direct the project.

Kero Blaster is a slighter effort than the epic Cave Story, and while it puts up a challenge, you’ll be done with it after two or three hours. But it’s a unique, unorthodox, and above all welcome return for an indie gaming pioneer, who now finds himself operating in a world of opportunity. "The main infrastructure is only limited by the internet, so it feels like there are no national borders for indie games," says Pixel. And if he finds success with his recent work, it could even serve as inspiration for the nascent Japanese indie scene. "I think if the Japanese were able to push their artistic expression more to the forefront, it would be valued even more by the world."

Kero Blaster is available on the iOS App Store and on PC through Playism.