As music downloads dwindle, streaming is the new king

Onstage at the Code Conference last night, Apple's Eddy Cue and Beats' Jimmy Iovine answered some questions about the marriage of their two companies. Beats is best known for its headphones, the product that built its brand and accounts for most of its revenues. But Cue made it clear that hardware was the less important part of the equation. "You just heard why we did this deal — it's about music," he told the crowd. Beats Music, he said, was the "the first music subscription service done right."

It's about music, not headphones

That's a big compliment for a product that launched less than six months ago and claims 250,000 customers, just a tiny fraction of the 10 million paid subscribers that industry leader Spotify recently touted. But Apple knows that the digital music industry is shifting rapidly, moving away from downloads and toward all-you-can-eat subscription services. It's hoping that with its marketing muscle and Beats industry connections it can create a true rival to Spotify and keep Cupertino synonymous with the cutting edge of music.

When asked last night if digital music downloads were in trouble, Cue admitted that "the rate has leveled off, it's true." That's a bit of an understatement. This chart, from tech investor Mary Meeker, illustrates the sea change happening the digital music market. Last year was the first time digital downloads didn't just slow or flatline, they actually fell. Streaming services, meanwhile, continue to grow at a rapid clip. 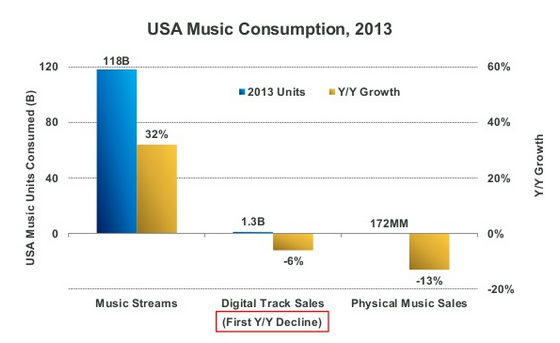 Apple dipped its toe into the streaming-music market with iTunes radio, which has reportedly been a disappointment. Past efforts at social music software, like Ping, also flopped. So it's not surprising that Apple decided to try going outside for its next stab. And while Beats doesn't have many paid subscribers right now, with Apple as its partner, the company suddenly has some very big advantages over competitors like Spotify, Rdio, and Deezer.

While streaming music services have been growing rapidly in recent years, none of the major companies in the space have figured out how to turn a profit. For Apple, which has hundreds of billions in the bank, this isn't an issue. In fact, Beats announced a price cut on its annual subscription yesterday. So far its monthly price is still on par with the competition, but if Apple wanted to, it could easily afford to undercut Spotify in order to steal market share.

Apple doesn't care if streaming music makes a profitBeats can now also be bundled with the purchase of new Apple devices. And that brings us back to the reason Apple saw this purchase as so important. In the past music was Apple's strong suit. There was the iPod, obviously, which set the standard for music players in the MP3 era. In the early years, iPhone and iPads reaped the benefit of being easy to sync with the music collections many people had built up in iTunes.

Streaming music services changed the equation. It's easier to simply have almost all the world's music available on demand for streaming — and to cache a few things for offline play — than it is to struggle with synching a huge collection of MP3 across multiple devices, or over stopgap services like Apple's iCloud. Apple knew it needed to make a change or lose the musical advantage it had over Google and Microsoft.

As Tim Cook told Recode when discussing the Beats purchase, "Music’s always been at the heart of Apple. It’s deep in our DNA. We’ve sold Macs to musicians since the beginning of Macs. And we accelerated the music industry with the digital music revolution, with the iPod and the iTunes music store." Those downloads are now dwindling, while streaming services rise. "So I see this right in the — if you were drawing a line, this would be the logical next data point."