I love America, and I want to buy T-Mobile

I love America, and I want to buy T-Mobile

Hot off buying Sprint, Japan's Masayoshi Son says you deserve better internet — but he needs T-Mobile to make it happen

"The American dream, the entrepreneurship, the passion, all those things, the hope that I got, I’d like to pay back. It is a bet in my heart that I have to pay back," Masayoshi Son said before an audience gathered at the US Chamber of Commerce in March. "I think America deserves the No. 1 position… because America is the best role model."

You could almost hear America the Beautiful playing in the background while bald eagles majestically landed on Son’s shoulders, tears of patriotic pride running down their feathered faces.

Just months into his ownership of America’s third-largest wireless company, Sprint, Son had to be feeling good about the stake he’d claimed. But his stirring words weren’t really about his own American success story — the SoftBank founder spent some of his formative years in Northern California — or his seemingly boundless love for the United States: it was the opening salvo in a corporate PR blitz that could continue for months, possibly years to come. Having reportedly been privately rebuffed by FCC Chairman Tom Wheeler early this year, Son’s turning to the public in the hope of earning hearts and minds in support of a T-Mobile buy — a public that has grown deeply wary of consolidation. He’d just appeared on Charlie Rose the day before his Chamber of Commerce appearance to extol the virtues of a Sprint / T-Mobile tie-up, arguing that he wants to have a "real fight" with AT&T and Verizon. And now, he’s putting the rhetoric into high gear at Recode’s Code Conference this week.

Speaking with Recode’s Walt Mossberg, Son did what he could to work the American crowd into a lather over the ostensibly awful performance of its internet connections. "Guys like us who come from outside and use internet at the hotel or my home in Silicon Valley… I said, ‘Oh my God, how can Americans live like this?’" Son’s driving message over the past three months has been clear and consistent: America, your internet sucks. I can help you, I’ve already fixed this problem in Japan. But you have to let me buy T-Mobile.

Neither Son nor his counterpart at T-Mobile USA — lightning rod CEO John Legere — have actually gone on the record saying that they want to combine forces, but they haven’t tried to hide their ambitions, either. Son refused to answer questions about a possible buy at Code Conference yesterday, only noting that he "admires" Legere and saying that he needs "scale" to accomplish his goals of taking on the nation’s broadband providers with a world-beating wireless network fast enough to replace even a wired connection.

That’s right: Son’s vision isn’t just to take on AT&T and Verizon. We’ve already seen that movie, it’s called John Legere’s T-Mobile. He thinks the key to unlocking regulators’ hearts — and the hearts of the American people — is to say he can take on the entire American internet landscape. It’s a timely call considering the ongoing net neutrality debacle and the perennial hatred of big ISPs. Could you realistically replace your 50Mbps cable modem with an LTE connection today? No, but Son wants you to think it’ll be an option if only you let him snap up T-Mobile. "So wireless is not the alternative competition against Comcast or Verizon’s wire service," he lamented about today’s internet landscape during his patriotic Chamber of Commerce manifesto. "But I’d like to give a shot. I’d like to provide 10X speed of wireless today [or] the fixed line broadband today." 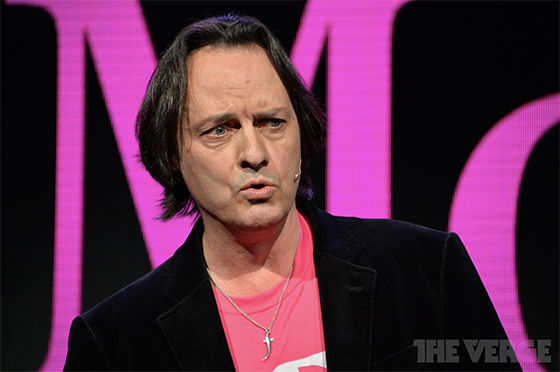 Unfortunately for Son, his grand ambitions of a combined Sprint / T-Mobile could be undone by simple facts, by an unusually brutal regulatory climate, and by Legere himself. Three years ago, T-Mobile — the nation’s No. 4 network — was on the ropes, technologically inferior to its much larger competitors and brutalized in AT&T documents buttressing its own attempted acquisition of the company. Since then, Legere has been the firebrand at the center of a reborn T-Mobile, shouting at anyone who’ll listen that he’s ready to take AT&T and Verizon head-on with better pricing and best-in-class LTE speeds. The Federal Communications Commission, the organization that would have to approve any deal between Sprint and T-Mobile, would only do so if it was seen to benefit competition — and nothing about Legere’s attitude suggests that he’s having trouble playing David to AT&T’s Goliath.

And perhaps more importantly, Son’s complaints about lagging internet speeds in America simply don’t stand up to scrutiny. Putting pockets of fiber and gigabit internet aside, the US is holding its own against SoftBank’s native Japan.

In the World Economic Forum’s 2013-2014 Global Readiness Report, the United States ranks 35th among nations in internet bandwidth, coming behind Luxembourg, Malta, and Canada, among others. Japan ranks 51st. According to Ookla’s NetIndex, meanwhile, Japan outperforms the US by a margin of 33.7Mbps to 24.4Mbps — but SoftBank averages just 8.78Mbps. That’s behind averages for FiOS, Comcast, Cox, Charter, Time Warner, and AT&T U-verse. That would also put it behind AT&T, T-Mobile and Verizon LTE, according to PC Magazine’s 2013 national speed averages.

Tack on the fact that the FCC already has two gargantuan deals on its docket — Comcast-Time Warner Cable and AT&T-DirecTV — and the odds get worse for every deal in the pipeline: the FCC simply isn’t keen on approving a spate of blockbuster telecom deals in rapid succession. Consolidation, after all, generally breeds a reduction in competition.

In fairness, Masayoshi Son is a fierce competitor: as he’ll proudly tell you, he grew SoftBank from nothing into a telecom juggernaut, fighting government-backed NTT the whole way. But with the Sprint feather already under his cap, the notion of adding another national carrier to the collection without running in a regulatory brick wall seems improbable at best — no matter how many times he tells you your internet sucks.

More from this stream Inside the first Code Conference: tech's heavyweights go off-script