Ducking the police may be a lot easier in the future

On January 2nd, 2013, David Eckart lived through a nightmare. After being stopped in a Walmart parking lot, New Mexico police asked Eckart to step out of his car, and patted him down. They searched his car without his consent. He was handcuffed, arrested, and eventually a search warrant was issued that allowed police to search his body for drugs, even though nothing had been found in his vehicle. He was taken by police to two emergency rooms where, despite his protests, he was humiliated and coerced into intrusive medical procedures. Hospital staff X-rayed him, searched his cavities for drugs several times, gave him three enemas in the presence of police, and finally an invasive colonoscopy. No drugs were ever found.

What happened to Eckart is a terrifying violation of dignity and privacy. And it all happened because police say he allegedly failed to yield at a stop sign.

It may never have happened if a computer were driving the car.

It’s ironic, but the future of privacy on America’s roadways could come from Google, a company that basically makes money from tracking everything you do on the web. This week Google showed off a bold vision for the future of cars; a custom-made driverless vehicle with no steering wheel and no pedals. You simply hop in the car, tell it where to go, and you’re off to your destination. It’s a crazy, amazing, optimistic bid for the future. It’s also controversial.

Some observers have called self-driving cars "a privacy nightmare." Since driverless cars will likely talk to each other on the road and periodically report back to the mothership, that means they’ll collect a lot of data, and nobody really knows yet how that scheme will work. Will Google target ads to drivers based on where they roam? Will companies share your driving data with dubious marketers or sketchy data brokers? And what about the police? Will driverless cars be safe from the NSA?

All of these concerns are valid, except that they don’t present a future that’s appreciably different from our present situation. We’re already living in a digital world where you’re tracked at every turn. If you log in anywhere on the mainstream web, you’re probably being tracked with cookies, and if you’ve got a device with GPS in your pocket, the police can already track your historical whereabouts by obtaining a warrant. But what if mass adoption of driverless cars actually increased the privacy of drivers more than any other roadway invention in history?

Privacy is about more than just data collection. It’s also about feeling secure against someone searching through your belongings. While the Bill of Rights protects citizens against unreasonable searches, it’s no guarantee that your rights won’t be violated — just ask David Eckart. Eckart’s example is extreme, but the kind of traffic stops that led to his ordeal are very common. Forty-two percent of involuntary encounters with police in the United States happen in cars, and many of these encounters lead to searches.

But even traffic stops that don’t result in searches can bring citizens unwanted attention or questioning. Whether they’re questions from police about where you’ve been and who you’ve been with, why you’re in a certain place, what you’re photographing, what’s in your bag, or anything else you might not want to tell an agent of the government, they pose a potential danger for people who don’t want officers prying into their lives. That’s not a paranoid view of police, it’s just a fact about risk: even if most police have your best interests in mind, the best way to avoid invasive searches is simply to never come in contact with officers unless you want to. These concerns are especially significant for minority groups that are disproportionately targeted by law enforcement for searches. 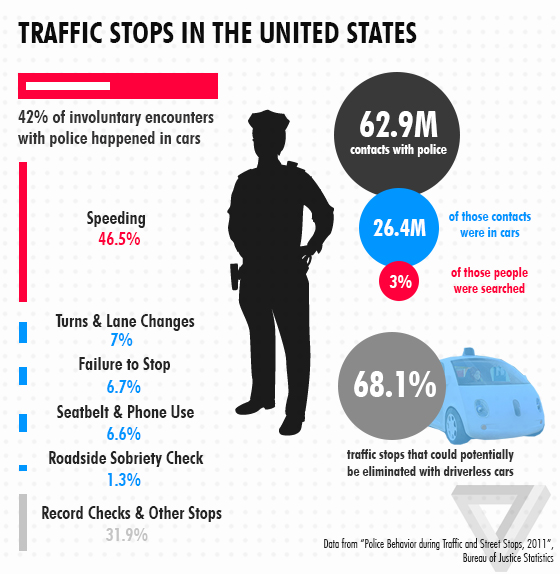 According to data collected by the Bureau of Justice Statistics, about 26.4 million people were subject to traffic stops in America in 2011. Of those stops, BJS data shows that a vast majority were violations based on the behavior and decisions of drivers. That includes speeding (46.5 percent of all stops), not wearing a seatbelt or talking on a phone (6.6 percent), illegal turns and lane changes (7.0 percent), stop sign or stop light violations (6.7 percent), and roadside sobriety checks (1.3 percent). Those are all legitimate reasons for police to stop people, but they can also lead to unwanted intrusions that have nothing to do with traffic violations.

Of all the traffic stops in 2011, BJS says about 792,000 people (3 percent) were searched. The majority of those people didn’t believe the police had a legitimate reason to search them.

Human beings get pulled over because they're human

In total, violations based on driver behavior accounted for 68.1 percent of traffic stops by police. In other words, human beings were pulled over in most cases because they’re human: they break the rules of the road and sometimes make mistakes. In some cases, like obeying speed limits, there’s even a cultural expectation that most people will routinely break the law. As the ACLU's senior policy analyst Jay Stanley tells The Verge, this means that roads are quasi-authoritarian spaces that give police huge discretion in choosing who to punish. But in a world with self-driving cars, things would look much different. "The latitude of the police to pull people over would be much reduced," Stanley says. "People wouldn’t be subject to so much arbitrary enforcement."

When humans become passengers instead of operators, moving violations would disappear as quickly as the steering wheel. Automated red-light and speeding cameras that ding drivers with robotic precision will become mostly obsolete. Self-driving cars won’t speed, they won’t make illegal turns, they won’t blow through stop signs, and they’ll safely ferry you home without incident if you’ve had too much to drink or if you’ve got a really important text message that can’t wait. That means police will either need a very good reason to pull you over, or a clearly bogus one; but either way, it’ll drastically lower the number of encounters people have with police.

That’s not to say the road to a driverless future will be perfect. The first self-driving cars will probably be expensive and rare; hybrids and all-electric cars are still the exception to the cheap, reliable internal combustion engine. Wealthy people and those in cities with access to taxis will enjoy the benefits of self-driving cars first, even though the least privileged are searched most frequently. And taking the steering wheel away from privileged groups first (read: wealthy white families) may make those still driving traditional cars bigger targets for police in the interim before mass adoption. In the 2011 data from BJS, black drivers were relatively more likely to be pulled over in a traffic stop, and blacks and hispanics were more likely to be ticketed than white drivers. White drivers were both ticketed and searched at lower rates than black and hispanic drivers.

Getting to scale won’t necessarily be pretty. But the wide adoption of self-driving cars could provide substantial benefits to everyone. A recent report from the Eno Center for Transportation notes that driverless cars could eliminate at least 40 percent of fatal crashes in the US, saving tens of thousands of lives and billions of dollars every year. Our commutes to and from work could be smoother and safer. Lots of people who can’t drive, like the young, elderly, and disabled, would be given new freedom.

And we probably won’t get pulled over by the cops.