Nearly 30 percent of humans are overweight or obese

Share All sharing options for: Nearly 30 percent of humans are overweight or obese

In 1980, there were 857 million overweight and obese people on the planet. Today that number is 2.1 billion, which means that nearly 30 percent of the world's population is obese or overweight, concludes a study published in The Lancet yesterday. And what's more worrisome is that no nation has managed to significantly decrease its obesity rates in the last 33 years.

47 percent rise in obesity among kids

In the study, researchers at Washington University used data from 188 countries collected between 1980 and 2013 to determine how the prevalence of overweight and obese people has changed over time. Predictably, the results aren't good, reports The Wall Street Journal. The researchers found that the number of overweight and obese adults rose by 28 percent in just 33 years. And in children, that number rose by 47 percent.

The scientists also reported obesity rates by country and, as it turns out, the highest rise in obesity among men occurred in New Zealand, Bahrain, Kuwait, Saudi Arabia, and the United States. The rise in obesity among women overlapped somewhat, Reuters reports, as it was highest in Egypt, Saudi Arabia, Oman, Honduras, and Bahrain. In the US, "roughly a third of men and women were obese" in 2013, the researchers write. But countries like South Africa, where 42 percent of women are obese, and Tonga, where 50 percent of adults are obese, are even more alarming. 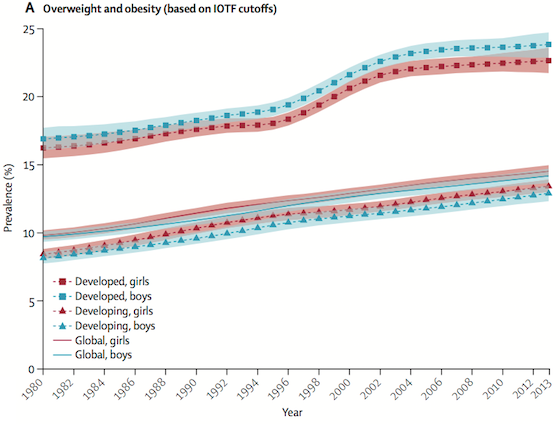 The study — the most comprehensive of its kind to date — didn't determine why this increase has taken place, but it did cite the usual suspects. These include poor diet, physical inactivity, and metabolism. Even the less well-know gut microbiome made an appearance among possible reasons for the sharp rise.

the rise will continue in the developing world

Given these results, the authors conclude that halting the rise in obesity by 2025 — a goal set by the World Health Organization — is "very ambitious and unlikely to be attained without concerted action." What is far more likely to occur, the researchers write, is that the rise in obesity will continue in the developing world, "where close to almost two in three of the world's obese people live."

The one glimmer of hope? "The epidemic might have peaked" in developed countries, the scientists write, as it appears that the rise in obesity in those countries has starting to slow down.