Motorola's American dream is over

Motorola's American dream is over

Company will shut down US assembly plant by end of 2014

Motorola won't be assembling phones in the United States for much longer. The Wall Street Journal is reporting that the company will close its Texas factory — essential to its Moto Maker assembly process — by the end of this year. Motorola has since confirmed the unfortunate news to The Verge. And the reason is simple: Motorola's smartphones aren't selling well enough to keep the place running. "What we found was that the North American market was exceptionally tough," Motorola President Rick Osterloh told the Journal. The decision potentially leaves hundreds of American workers out of a job.

"What we found was that the North American market was exceptionally tough."

The plant's fate was thrown into question after Lenovo announced plans to purchase Motorola Mobility from Google early this year. On the conference call announcing that deal, Lenovo executives were cagey in discussing what would happen to the facility, though they did say they expected to turn Motorola's fortunes around in just a "few quarters." With the Moto X not selling as well as expected and Motorola bleeding hundreds of millions of dollars each quarter, closing the Texas plant is an obvious step towards profitibility.

Approximately 700 people currently work there — down from a high of several thousand — which suggests that Motorola has quietly been pulling away resources for some time. All of Motorola's future manufacturing will now happen overseas.

The "assembled in the US" tagline was central to Motorola's marketing push for the Moto X when it launched last year. It represented a daring shift in smartphone manufacturing, but clearly the gamble hasn't paid off. Then CEO Dennis Woodside claimed that "it's a myth that you can't bring manufacturing here because it's too expensive," and said the added cost of building in the US was not "material to the economics of the business." Of course, all of that hinged on Motorola selling the Moto X in higher quantities than it apparently did, which prevented it from taking advantage of the economies of scale. 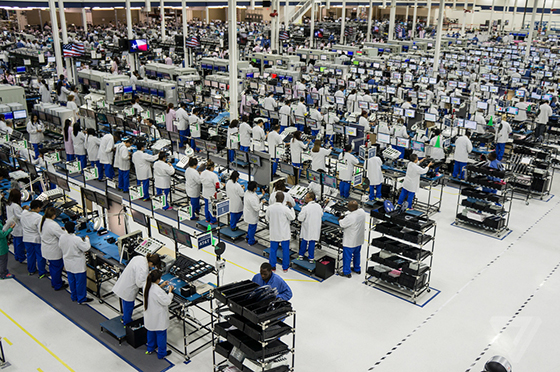 Motorola tells The Verge that it will continue to offer the Moto Maker smartphone customization service, but it's not clear exactly how that will work with manufacturing being moved overseas. The company has said in the past that the key to Moto Maker's success was close proximity to customers and a fast shipping time. At the very least, it's difficult to imagine a Lenovo-owned Motorola will be able to match that.

Motorola says it will continue to offer the Moto Maker service

Motorola learned the hard way how difficult manufacturing in the US can be, but all hope isn't lost for American technology manufacturing. Lenovo, Motorola's parent company, still maintains factories in North Carolina for its ThinkPad laptop line, and Apple famously moved the assembly of its Mac Pro to the US late last year.