These phones will survive the apocalypse

These phones will survive the apocalypse

There are few things more depressing than losing your beloved electronics to a spill or short fall. Fortunately, devices are starting to trickle out with the ability to survive such dangers. But what if you need something even more resilient to life's little accidents? Rugged phones are nothing new, but now they're becoming more widely available and — more importantly — beginning to look like something you'd actually want to use.

These phones each meet the two most common industry standards for toughness, IP-67 and MIL-810G. That first certification means no dust or liquid will be able to get inside your phone. MIL-810G, on the other hand, is a set of specifications set up by the US military to ensure a device works after hard impacts and extreme weather conditions. In other words, these phones are strong enough to handle anything from the construction yard to a 2-year-old toddler with a penchant for throwing things. 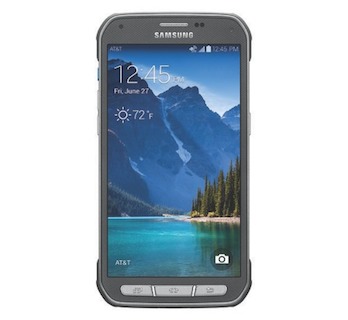 The newest offering in the ruggedized phone market is Samsung's Galaxy S5 Active, which is essentially just a beefed up version of its popular Galaxy S5. But that's actually a pretty compelling reason to buy it, because it's one of the only tough-phones out there with what we'd consider modern hardware and software. It runs the latest version of Android and has the same big 5.1-inch 1080p display from the S5. Another thing it borrows from its cousin is the 16-megapixel rear sensor, which marks one of the first times a ruggedized phone has had a decent camera. If you're looking for a smartphone that's tough and still heavy in the feature department, the Galaxy S5 Active is your best choice. 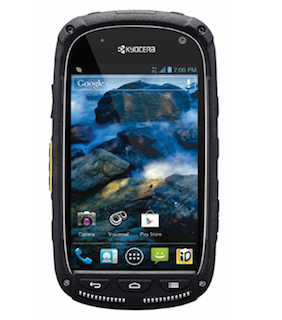 It's frequently the case that you'll need to make some compromises in performance and features in order to get the toughest phones; sometimes, it's just because they're older. The Kyocera Torque is Sprint's offering for those looking for a tough smartphone — but it's more than a year old at this point. Worse, it runs a 2-year-old version of Android. But if you're a Sprint customer, especially a Direct Connect (push-to-talk) user, this is as tough as it gets. 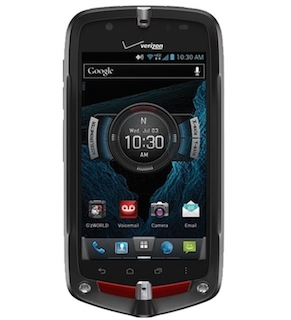 The Torque isn't the only rugged smartphone on sale that's getting a bit ancient: Casio's G'zOne Commando on Verizon is nearly as old and has only a slightly newer version of Android. Unlike the Torque, though, the G'zOne has a much more reasonable base storage of 16GB (instead of 4GB in the Torque) and a more modern 8-megapixel camera. And regardless of your opinion, it's hard to ignore the design — it looks like a device built to survive Robocop's Detroit. 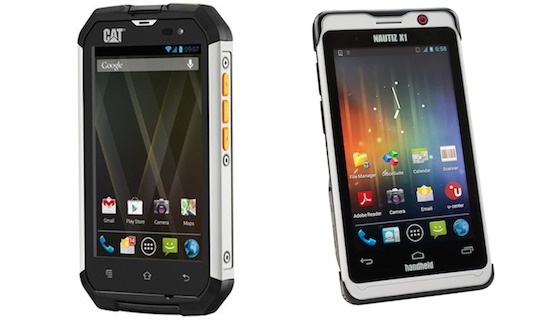 In reality, most ruggedized smartphones are purchased by companies and governments for their employees who work in the field and need a connected device. CAT, maker of construction equipment, started selling a line of ruggedized phones in 2012 to cater to those exact needs. CAT's B15 Rugged Smartphone has some pretty disappointing specs — the worst of which is its lack of LTE — but speeds and feeds come secondary to making sure the phone is built to handle the worst conditions. Its aluminum chassis capped with heavy-duty rubber on top and bottom makes the B15 looks like a high quality hand tool.

Some of these phones don't even have LTE yet

The Nautiz X1 from Handheld Group is aimed at the most discerning corporate buyers. Unlike most ruggedized devices with a military-grade MIL-810G rating, the Nautiz X1 was thoroughly tested using the actual methods the US military uses to classify such devices. The phone comes with a 4-inch LCD, which is designed for use in bright outdoor settings. Buyers can specify what type of radio the phone uses, but either way, it's 3G only. Other specs like battery size and operating system (Android 4.0 or Windows Embedded Handheld 6.5, a throwback to the Windows Mobile that predates today's Windows Phone) can also be customized.

If you buy one of these heavy-duty ruggedized phones today, you'll have to decide which set of compromises fits your needs. One of the biggest compromises you make with any rugged device is in size and weight. Luckily for people with less demanding durability needs, mainstream devices are getting more and more capable of withstanding the rough-and-tumble details of their everyday lives. Protective glass coatings like Gorilla Glass are becoming standard fare, protecting screens from light scratches and falls. And for the past couple years Sony and Samsung have made their flagship phones waterproof and dustproof. If that trends continues, the next smartphone you buy might just be tough enough without any extra-rugged bells and whistles — but until then, a handful of manufacturers have you covered.