Health at 200mph: how supercars will make you fitter and stronger

Share All sharing options for: Health at 200mph: how supercars will make you fitter and stronger

On an overcast and languid April day, I experience the English countryside at its most tranquil. Trees sway with merely token effort, clouds meander through an apathetic sky, and electric-orange supercars whizz by. Seeing one of McLaren's 650S coupes glide past me is the first hint that I’m approaching the storied Formula 1 team’s Technology Centre. I’m here to learn more about the McLaren Applied Technologies (MAT) division and the work they’re doing outside of motorsport — but it’s hard to think about that as the kidney-shaped spaceship that is the company’s HQ surfaces on the horizon.

Now nearly 10 years old, the building is the perfect embodiment of McLaren’s brand image: immaculate, futuristic, uncompromising, sparse, and efficient. I promise myself not to make the obvious Bond reference, but stepping inside this place is the closest anyone will come to a real-world visit to Q’s labs. Footsteps echo beneath my feet as I stride through a long, pristinely white corridor. A tubular elevator then propels me up into an ocean of curved glass, carbon fiber, and natural light. Before I can decide whether I find the perfectionist architecture brilliant or bonkers — all that glass has to be cleaned pretty much constantly — in comes McLaren’s own version of Q. He’s keen to tell me how the company will start treating us all like racecars. 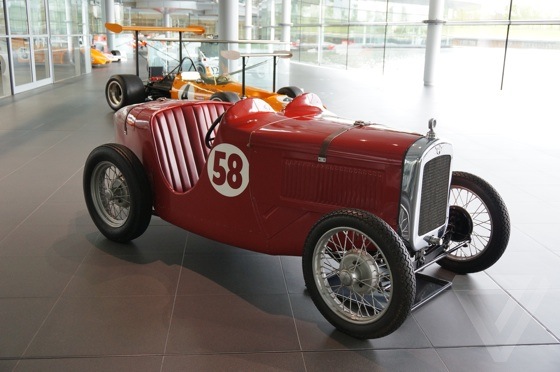 Geoff McGrath is vice president of the MAT group, whose work it is to take the technical expertise gained from five decades in Formula 1 racing and apply it to other areas of innovation. He starts by showing me a Venn diagram representing the three overlapping pillars of what his team does: monitoring, simulation, and design. What I learn immediately is that McLaren’s technological leadership has little to do with the actual technology being used. The company is responsible for maintaining exhaustively detailed, up-to-the-second health records of all cars during Formula 1, NASCAR, and IndyCar races, but it does it with the most basic of sensors: accelerometers, strain gauges, and thermometers. On a racing weekend, that results in billions of data points, with over a thousand parameters being measured and hundreds of data streams coming out of every car. It’s big data, alright, but it’s what you do with it that counts.

"Sensors are so cheap, communication is pervasive, the opportunity is huge."

McLaren can not only tell racing teams how their car is doing, it can also forecast the expected effect of changing any one of its attributes, whether it be the shape of the rear spoiler, the position of the driver, or the stiffness of the suspension. Dynamic, on-the-fly event modeling is helping decision-makers figure out the best course of action. It takes a lot of clever pattern recognition and an accurate diagnosis of causality, and while McLaren’s secretive about how its system works, the fact that the world’s biggest motor-racing series are all using it suggests it’s pretty good at its job. Now imagine applying all those tracking and predictive smarts to your body: that’s where McGrath wants to take us. He points out that no one really needs a fitness-tracking device to tell him he’s feeling unwell after a late night — what we truly want is some help in figuring out what to do about it. 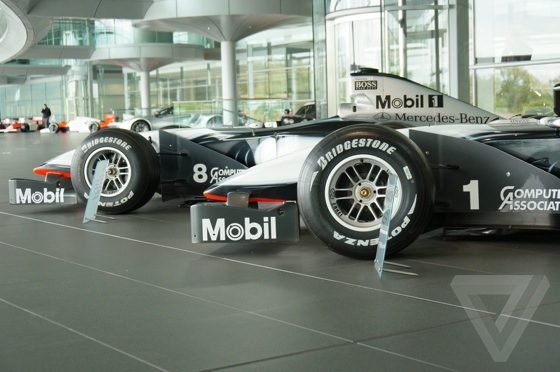 This is where MAT’s third, and perhaps most critical, area of research comes in: design. "Sensors are so cheap, communication is pervasive, the world of opportunity is huge," says McGrath, but the real challenge is to draw meaningful insights from the data and provide relevant feedback to the human wearing all those sensors. Echoing what Google’s Matias Duarte recently said, McGrath tells me that the task of designers is to ask the right questions in order to arrive at the truly valuable answers.

He cites a product that is now under the Google umbrella, the Nest Learning Thermostat, as a great example of "beautiful intelligence." The Nest combines input from the user and tracks his energy consumption to actively modulate when the heating should be on. "The product should adapt to the way it’s being used," says McLaren’s tech chief, before suggesting seemingly fanciful ideas like sports apparel that actively adapts to the way you’re wearing it, or bicycles that automatically change their suspension according to the particular surface and rider. The twinkle in his eye tells me these aren’t idle daydreams, but active projects going on inside the spotlessly clean labs behind him.

If it doesn't sound like sci-fi, Mclaren won't work on it

I express my concern that wearable electronics still seem like a fad today — a topic of discussion that’s generating more heat than light — and McGrath agrees, but he doesn’t think it’s a passing fad. The solution to making wearables compelling, he believes, is personalization. Ten thousand steps in a day can be useful as information, but only if they’re contextualized by how much walking you usually do and the state of your overall health. Thus, the useful device is necessarily one that knows you intimately and acts on that information to improve your well-being.

McLaren already designs its racing cars in this way — it places the driver inside a simulator and then virtually builds the perfect car around him. This is the central overlap of those three Venn circles: data from the past is used to make simulations today for the best designs of the future. Numerous high-profile partners have implemented MAT’s systems. The British Olympic team, the English rugby squad, and Chelsea Football Club have all used its technology to fine-tune training regimens and in-game conditioning. Outside of elite sports, pharmaceutical giant GlaxoSmithKline and medical insurer Simply Health are both employing MAT biotelemetry to monitor the health of patients. On an even grander scale, Heathrow Airport is applying the lessons learned from optimizing F1 pit stops to more efficiently maneuver planes on the ground. Each of those deployments has been customized to the particular project’s needs, and the same level of personalization is necessary for consumer products to flourish.

Wearables are the next frontier to be breached

How long will it take for this sort of intelligence to cascade down into everyday wearables? Don’t look for it this year, says McGrath, but MAT is already working with "one of the best-known consumer electronics companies in the world" on mass-market products for 2015. While that collaboration is still at an early stage, McGrath appears confident that we’ll soon be seeing a lot more of McLaren’s expert input in consumer devices. 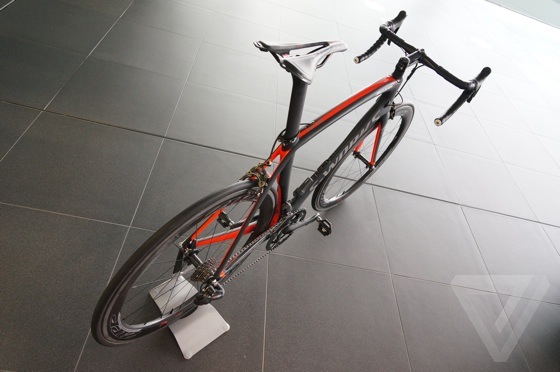 Making my way out of McLaren’s grand temple of technology — past the world’s largest collection of motorsport trophies and millions of dollars’ worth of Formula 1 cars — I come across one of the company’s more peculiar creations: the Specialized Venge bike. It’s light enough to pick up with just one finger and the best example yet of what McLaren engineering can do when it’s taken beyond the realm of motor racing. The next step in the company’s evolution will probably be even smaller and lighter still, though no less intelligent. You won’t see the McLaren logo on your next wearable device, but you might just find McLaren technology inside it.