Supply chained: Apple's sapphire production will be hard to copy

Supply chained: Apple's sapphire production will be hard to copy

Apple opened the door to machined-aluminum electronics, will it do the same for sapphire glass?

Though abundant in nature and everyday items like soda cans, aluminum didn’t figure prominently in modern electronics until just a few years ago. Then Steve Jobs discovered an appreciation for the metal, the unibody MacBook was born, and a chain reaction was set off that finds us now able to buy precision-milled aluminum hard drives, batteries, and even cameras. How did all this come to be? And is Apple about to repeat the feat with its latest investment in manufacturing, this time focused on sapphire glass?

The pivotal moment for aluminum happened in October 2008. "We've been working super hard on trying to design some new unibody enclosures," Jony Ive announced in his usual understated fashion from the stage of Apple's Spotlight on Notebooks event. What Apple had done was take the machined-aluminum construction from the MacBook Air it had introduced a few months earlier and extended it to its mainstream MacBook and MacBook Pro laptop family. CNC (computer numerically controlled) machining was not at the time a commonly used manufacturing technique, but Apple’s size and scale meant that it had to become one.

"Aluminum is now cheaper and easier to implement thanks to Apple itself," says noted analyst Ming-Chi Kuo of KGI Securities. His assessment, shared by many others, is that Apple’s demand drove "related suppliers of aluminum casing to invest more on capacity and technology." They were all competing for the lucrative prize of satisfying the MacBook maker’s need to extrude, machine, anodize, and recycle vast quantities of the metal. You don’t need to agree with Steve Jobs that Apple "invented a whole new way of building notebooks from a single block of aluminum" to appreciate that its change in manufacturing fundamentally altered the supply chain for the material.

Because Apple needed a supply chain for high-grade aluminum, the whole world got one

"Ten years ago, you couldn’t find enough people to build an all-aluminum phone, even if you could afford it," says HTC’s former chief designer Scott Croyle. The original Motorola Razr featured the metal, but only sparingly, and it wasn't until 2010 that we saw the first unibody aluminum phone in the shape of the HTC Legend. Nokia and Apple itself followed suit with the N8 and iPhone 5, and the trend for the future is for phones with metal enclosures to grow increasingly affordable and widespread.

Nokia’s head of colors and materials, Joeske Schellen, echoes Croyle’s sentiment in describing a "manufacturing revolution" over the past decade, in which processes like aluminum extrusion and forging have become more widely available and producible on a mass scale. There’s still a great deal of clever engineering required to make a metal phone functional — particularly in working around the issues of antenna interference — but Croyle makes the important point that smaller companies don’t have the same luxury of "reinventing a whole new supply chain around a material" that Apple does.

While neither Nokia nor HTC would openly acknowledge Apple’s contribution in muscling open the doors to machined-aluminum electronics, the American Aluminum Association is a little more forthcoming. Visitors to its aluminum.org homepage are greeted with a "Thank you, Steve Jobs" message, followed by the tagline of "the man who made aluminum cool again." The impact of that 2008 MacBook launch is still reverberating today, with even boutique outfits like headphone maker Nocs now offering "a CNC-machined, chamfered-cut, sandblasted work of art" for a few cents short of $80.

If there is such a thing as an Apple way of doing business, the unibody aluminum story typifies it. Once the Cupertino company has decided to adopt an expensive — or even heretofore nonexistent — technology or manufacturing method, it spends unflinchingly to find the suppliers and producers who can turn it into a reality. This brute force approach has paid off for Apple repeatedly, and also benefited the broader industry. Another example of it can be found in ViewSonic picking up the original iPad’s screens for its line of budget Android tablets after Apple no longer needed them.

That may be how Apple’s usually done things, but it’s not what the company is doing with sapphire. After sealing a deal with GT Advanced Technologies in November last year for the manufacture of sapphire crystals at a new plant in Arizona, Apple is now moving into the business of producing rather than merely sourcing its component materials. This is a change in strategy, but not an unforeseeable one. As Horace Dediu points out in a 2011 analysis of Apple’s manufacturing expenditure, the Cupertino company has been on a consistent path to owning more of the tools, machinery, and equipment used in the creation of its devices. Owning the entire factory is just the next step in this transition, whose goal appears to be to extend the period of exclusivity for Apple’s hardware innovations. Without outsourcing the work to others, Apple is helping to minimize the potential for any trickle-down benefits for its competitors.

There are a number of practical distinctions between sapphire and aluminum that may also have motivated Apple’s new approach. Whereas the silvery-gray metal makes up 8 percent of the Earth’s crust and has no supply shortages, synthesizing sapphire takes a great deal of time and effort. Harvard physicist Frans Spaepen says that the process for making sapphire windows (sapphire’s commonly used in the place of glass but is structurally different) is "already very mature and is unlikely to undergo the kind of revolution that led to cheap aluminum." Vertu’s head of design Hutch Hutchison agrees, adding that the very qualities that make sapphire attractive as a material also make it a nightmare to work with. It’s a superbly tough and scratch-resistant material, he says, but that makes it "very difficult to cut, grind, and polish ... diamond tools have to be used for all of these processes." As a material, sapphire is thus the direct opposite of aluminum, which is prized for its malleability and versatility.

A better comparison for Hutchison is the one between sapphire and titanium. The high-strength metal was the material Apple used in its laptops before aluminum and it’s been available to smartphone makers for decades, but concerns over its cost and difficulty of processing have kept it limited to luxury products. Nokia’s Schellen tells me that a sapphire display would cost her company roughly 10 times the amount it currently spends on Gorilla Glass displays, and it’d also limit design diversity since a sapphire screen has to be flat. There’s also the issue of brittleness, as Scott Croyle informs me that when HTC does drop-tests with materials like ceramics and sapphire, "they snap and break into a gazillion pieces." 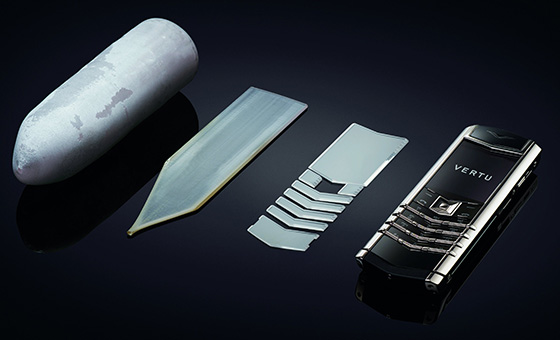 Even with all those hurdles in place, Vertu has been using sapphire crystal displays in its phones for nearly 15 years, with the current 4.3-inch Vertu Constellation including a thin layer of sapphire glass laminated over the top of its touchscreen and display assembly. Before being contracted by Apple, GT was busy showing off sapphire display covers for iPhones, so all the building blocks for a sapphire crystal iPhone screen are in place. Then again, the Constellation’s price starts at thousands of dollars, whereas Apple’s efforts are aimed at the mass market.

Apple's diving ever deeper into the manufacturing business

Can the Arizona factory really speed up production times and improve yields to the point where sapphire becomes a viable replacement for the entire iPhone’s display? Talking to materials scientists and mobile industry analysts suggests that this would be an overly optimistic goal for this year. The most immediate beneficiaries of Apple’s new sapphire production are likely to be existing applications like the iPhone’s camera lens and home button along with that long-rumored iWatch (should it ever materialize). Given the watch industry’s established practice of using sapphire screens to differentiate higher-end watches, Apple can probably be expected to feature the material heavily in any wearable it decides to release.

Apple’s history shows a company of unbridled ambition and a matching willingness to invest. What’s different about its approach with sapphire, however, is that it will be much harder for others to copy. Apple is creating a new, more integrated supply chain that only fellow juggernauts like Samsung will be able to compete with.