Can this be your one true identity on the web?

Even for a product known for its long learning curve, Twitter’s old profile pages could be vexing. The text of your biography smushed on top of your header photo, making both hard to look at. Background images tiled awkwardly. And when you looked at a profile, says Sachin Agarwal, a product manager at Twitter, "it was impossible to quickly figure out — who is this person?" Dave Bellona, a designer at Twitter, puts it another way. "It was hard to make the old profile look good."

Bellona, who joined Twitter a year and a half ago, led the effort to find a better design. Rolling out now across the web, the new profile comes at a time when Twitter is seeing fewer new profiles created than it would like. The company reported 255 million active users last week, well short of the 400 million that Twitter reportedly hoped to have by the end of 2013. Embedded in the new look are changes that make the profiles prettier and more of a destination in their own right than they were before. But the redesign raises the same question that seemingly every change to Twitter’s product does these days. Can Twitter tweak its way back to hyper-growth?

Interviews and design mock-ups shared with The Verge show a company that tried a series of bolder approaches before settling on one that should be more familiar to users of other social networks. They also show how seriously Twitter is taking the challenge of making the service more inviting to newcomers — even at the risk of alienating early adopters.

The redesign began with the insight that for many people, the profile page has become more than a gateway to Twitter’s service. As Twitter grew in stature and importance, the profile went from being a simple repository of tweets to a showcase for the online identity you present to the world. The profiles are indexed by Google, and over time have come to rank highly in search results. "We really see the Twitter profile as your public identity online," says Agarwal, who joined Twitter in 2012 after the company acquired Posterous, the blog platform he co-founded. "It brings together all the content you’re producing on all these services, all just coming in live. We want the profile and the @ handle to be things you put on your business card."

To be business-card worthy, Twitter needed to help its users present themselves with more style. The old profile had the pancake stack of bio and header image sitting on top of a hard-to-scan stream of tweets and replies. It included every reply a user ever sent, making the stream look like a litany of one-sided conversations. Something had to change. For a new design principle, Bellona turned to print media. "Could this be more like a magazine cover," he wondered, "where we’ve surfaced the best of the best?"

What followed were months of iteration and user tests. The designs organized tweets in two basic ways: into tiled cards, as you might find on Pinterest, and into a feed, which would be more familiar to Twitter users. This summer, Twitter tested one card-based design that made certain cards bigger based on the relative level of interaction the tweets were receiving.

Bellona’s interest in "the best of the best" also led the company to experiment with a profile that organized tweets by popularity instead of chronology — a sharp break with the service’s traditional presentation that was ultimately axed. "We’re a time-based feed service," Bellona says. "This doesn’t feel right."

The company’s attention turned to designs that incorporated a more traditional, feed-like layout. But the company’s interest in highlighting a person’s best work persisted. Another design selected the three most popular tweets for a given user and placed them at the top of the profile. 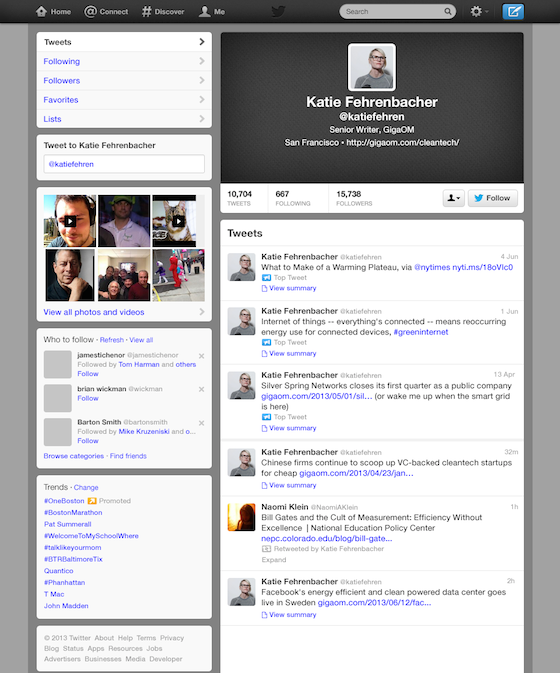 But that design presented problems of its own. Many popular tweets are inexplicable once you remove them from the day they were posted. Putting months-old tweets on top of a person’s feed risked making the profile feel dated and inaccessible.

Ultimately, Twitter settled on the profile design now rolling out across the web. It strips out replies by default, so that you no longer feel like you’re missing out on half the conversation when you browse someone’s posts. It highlights a person’s most popular tweets by making them larger in the feed, based on their relative level of engagement. And if there’s something that the user wants to highlight regardless of its popularity, there’s now an option to pin a favorite tweet to the top of the profile.

The profiles also update automatically every time a new tweet is posted, so if someone were live-tweeting an event that interested you, you could just keep their profile open and watch their posts in real time. It’s all part of a broader effort across the company’s products to make them more visually appealing. Photos are now larger, and videos from the company’s Vine app play automatically when you scroll. "Right off the bat, we knew we had to make the media experience just phenomenal," Agarwal says. "And so there’s a lot more of a focus on that in the new design."

The design is also friendlier to new users in subtle ways. Previously, someone who created a new account would see a profile full of zeros — no followers, no tweets, no favorites. One of Bellona’s mantras for the new profile was "no eggs" — and as a result, you’ll never see a giant zero on your profile. Tweets, followers, and favorites won’t appear there until you have some to show. "It should just grow with you as you start to experiment," Bellona says.

The new profiles go hand in hand with other efforts Twitter is making to court new users, including one that pre-populates a first tweet for them to take more guesswork out of the process.

As with most major redesigns, Twitter’s new profiles have drawn a mixed reception. One of the most common criticisms is that the company is simply aping Facebook — but Bellona says they never set out to mimic anyone. In a roundabout way, he suggests that social-network profiles are bound to share some features in common. "When you’re designing a car, you put the steering wheel on the left-hand side of the car," he says. "It’s that type of thing. We’re designing a page that has to handle lots of different types of content, handle different types of languages, different types of use cases on different screen sizes. Then we got to it and it was like one of these things like — Oh, this feels really good. Oh, it looks similar to Facebook. That was the thing. Well yeah, I’m not going to put a doorknob in the middle of the door. I’m going to put it on the left-hand side of the door."

The best indication of the profiles’ success will be whether the company’s slowing growth rate rebounds three months from now, when Twitter next reports its quarterly earnings. The company has improved on previous designs in meaningful ways, making good on the promise of a profile that can serve as a powerful public identity online. The question now is how much that matters.