In an extensive report released today at the White House, the US Global Change Research Program (USGCRP) gave its clear vision of the dangers of global warming, stating, "Climate change, once considered an issue for a distant future, has moved firmly into the present." Reiterating points made by the UN earlier this year, the report shows that the effects of increasing temperatures can already be felt across globe, and further impacts are "now unavoidable." However, Americans still have a choice in whether or not to mitigate these changes or see them worsen irreversibly by the end of the century.

"The warming trend is primarily the result of human activity"

The National Climate Assessment is a Congressionally-commissioned report written by a group of more than 300 climate experts. The third of its kind, the report was instituted by the Global Change Research Act of 1990. However, this effort contrasts with previous ones in that scientists are now much more confident in their research and their subsequent call for action. As the report reads, "Continued warming and an increased understanding of the U.S. temperature record, as well as multiple other sources of evidence, have strengthened our confidence in the conclusions that the warming trend is clear and primarily the result of human activities." 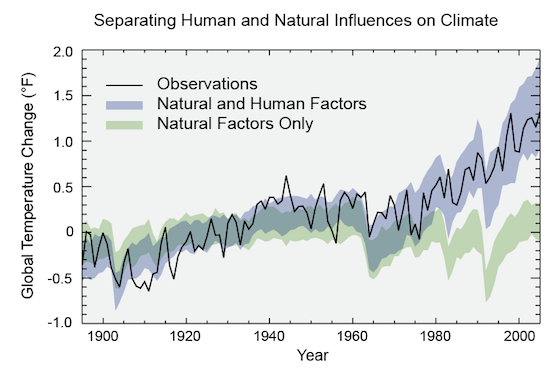 The conclusions themselves are dire. The northeastern United States alone, for instance, has received more heavy precipitation in the last half century than any other region in the US, and the sea level is approximately eight inches higher there than the global average. Heat waves, flooding, and accelerated sea level changes pose threats to people, agriculture, fishing, and infrastructures in major eastern cities, prompting 11 of the 12 northeastern states to develop adaptive strategies to curb the damage.

"The findings... underscore the need for urgent action to combat the threats from climate change."

In response to the findings of the assessment, the Obama White House issued a statement calling for immediate action to combat climate change. "The findings in this National Climate Assessment underscore the need for urgent action to combat the threats from climate change, protect American citizens and communities today, and build a sustainable future for our kids and grandkids." The response comes during a week focused on climate initiatives, which will see the president holding a summit on green building tactics and, according to CNN, will announce new solar energy plans. The plans come as part of Obama's second-term focus on climate, which saw him recently issue an executive order calling for local governments and agencies to better adapt global warming.