Evernote just announced an expanded partnership with LinkedIn designed to make it a better place to organize your address book, improving the ability of its iOS app to scan business cards and manage contacts. The card-scanning feature, which became part of the iOS app last year, will now pull in profile information from LinkedIn's 300 million members and enhance the note with information about the time and place where you met. LinkedIn will begin directing its members to use Evernote for business cards instead of CardMunch, the app it bought in 2011 and is shutting down July 11th.

Marrying who you know with what you know

The move demonstrates the increasing importance of business users to cloud-based productivity services like Evernote. Like Box and Dropbox before it, Evernote has introduced a version of its service designed specifically for the enterprise. Business users tend to be more lucrative customers than the average person, who is more likely to use the free version of Evernote's service. Becoming LinkedIn's default service for scanning business cards helps Evernote to better position itself as an essential part of working life. Evernote CEO Phil Libin says it's the start of many collaborations to come — LinkedIn and Evernote, he says, represents the union of "who you know" and "what you know." "The companies are really very compatible. You can combine them in a lot of different ways." 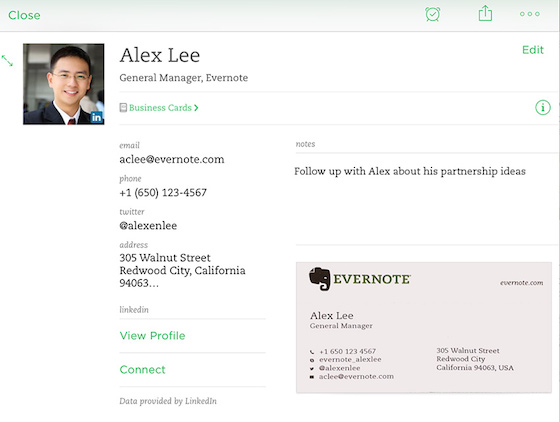 For starters, that means rolling out business-card scanning to more of Evernote's 90 million users. The service, which uses automated optical character recognition to pull out names, titles, and phone numbers, and organizes them inside your notes, has previously been available only to paying customers. Now Evernote users can get a year of free scanning in exchange for linking their Evernote accounts to LinkedIn. In addition to creating a note inside Evernote, the app will also give you the option to connect to your new contact on LinkedIn, save the person's contact information to your phone, or share your own contact details.

As part of the partnership, LinkedIn is shutting down the long-neglected CardMunch. Before it was acquired in 2011, the app was one of the only free ways to scan a mountain of business cards quickly and accurately. But the service has languished since being purchased, leading to complaints from users who worried it had been abandoned. "We have some extremely passionate and loyal users of that application," says Bob Rosin, vice president of business development at LinkedIn. "We knew they wanted more."

CardMunch was a minor acquisition for LinkedIn — the company paid only $2.4 million for it — and it never really caught on with the company's users. (LinkedIn has 300 million users but says CardMunch was scanning only 45,000 cards a day.) Making CardMunch a central part of LinkedIn would have required serious investment, since it paid contractors — through Amazon's Mechanical Turk — to verify the accuracy of every card. Evernote's app scans everything automatically. It's also available in more languages, and will eventually allow LinkedIn users on Android devices to get card scanning. (Evernote says that's coming soon.) CardMunch users will get two years of free business card scanning through Evernote, and can also migrate their contacts with a couple of clicks.

LinkedIn's experience with CardMunch suggests that relatively few people are migrating their business cards to the cloud. But while some are giving up on cards entirely, Libin for one says they are here to stay. "I call bullshit on business cards going away — there's no reason for them to go away," he says. "And I think we've actually made them more useful."

Update, May 7th, 9:45 a.m.: This piece has been changed to reflect the fact that CardMunch will shut down July 11th. The companies had previously said it would shut down in June.