Camera cops are coming to Camden

In the world's biggest pilot scheme of its kind, London's Metropolitan Police is today deploying 500 wearable cameras as part of its officers' emergency response kit. Provided by Taser, the Axon Body cameras have a 130-degree field of view, can record over 12 hours of continuous footage, and are hardy enough to survive being run over by a car.

In a briefing at New Scotland Yard on Wednesday, Assistant Commissioner Mark Rowley explained that the use of this equipment will help convey "the rawness and the awfulness" of the situations officers respond to. It will also assist with identifying perpetrators in chaotic situations and record vital evidence that might otherwise be missed. More guilty pleas, fewer cases falling apart, and a reduced need to go to trial — that's the ambitious set of goals expected to be achieved through today's deployment.

"We are testing this with a view to how to do it, not whether to do it."

Rowley cited the established use of cameras by traffic cops as indicative of the impact he anticipates seeing. Conviction rates and guilty pleas rose dramatically as a result of that change. "We are testing this with a view to how to do it, not whether to do it," continued the Met's assistant commissioner, underlining that while this is a trial, the questions being answered will be ones of practicality rather than overall strategy. Cops with cameras are now a thing in London, and it doesn't seem like they'll be going away. 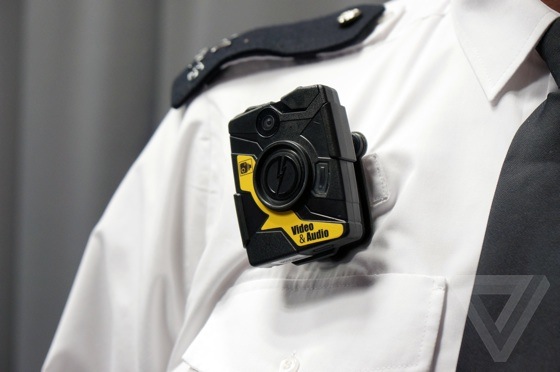 The first boroughs to receive 50 cameras each will be Barnet, Bexley, Bromley, Brent, Camden, Croydon, Ealing, Havering, Hillingdon, and Lewisham. Officers will be expected to turn them on when entering any sort of contentious situation, such as a stop-and-search or a potentially ongoing crime. To illustrate the effectiveness of recorded footage, we were shown samples from earlier small-scale trials in the UK. One offered a direct confession, with the offender casually admitting that he stabbed his victim because he wasn't given what he wanted, while the other provided a harrowing look at the aftermath of a domestic violence incident. The gruesomeness of the latter video, with bloody palm prints on the walls and a victim struggling to speak, made the efficacy of this approach painfully clear.

Beyond the hunt for evidence, the Metropolitan Police also wants to achieve a higher level of transparency of its operations and trust with the public. Taser has already seen a number of major US metropolitan areas deploy its system — including New Orleans, Las Vegas, and Detroit — though it's the small city of Rialto, California, that has shown the best results. Since implementing wearable cameras, the local police department has seen 87.5 percent fewer complaints and a 59 percent reduction in the use of force.

Those numbers are Taser's most compelling counterargument to the prevailing fear that such on-body cameras would turn policemen into walking surveillance stations. The Met notes that there are already provisions for gathering recorded data by undercover officers, so this isn't a completely new phenomenon, though in the case of the Axon cams, officers will be required to announce the use of video technology and, importantly, people can ask for the cameras to be switched off.

Not comfortable with being filmed? Cams can be turned off upon request

London's cops appear to be welcoming the new equipment with enthusiasm, if Rowley's assessment is anything to go by. The feedback he's received so far suggests a "nothing to hide" attitude that actually favors doing police work in a more accountable and public manner. The mechanics of the Taser camera are such that officers cannot interfere with any of the captured footage. All they do is activate the camera at the appropriate time and then dock it back at the station where all the data is uploaded to Taser's servers.

A 30-second buffer is constantly being prerecorded so that any visual information that might have come before the officer is able to turn the camera on will also have been captured. Footage is kept for a standard 31 days, as with other evidence, and then deleted. Any concerned party can ask that it be kept for longer if it's considered to contain material evidence. This policy goes both ways: video from the wearable cam will be available to members of the public alleging police misconduct.

Perhaps the biggest area of concern with the introduction of this new system is that London's police force will be outsourcing almost the entire task of collecting, storing, processing, and organizing what will rapidly grow into a vast evidence database. Aiming to allay such fears, Taser COO Jeff Kukowski tells me that the company won a rigorous public tender process to earn the right to handle both the hardware and back-end operations of the new scheme. Plus, he says, the hundreds of police authorities already relying on Taser's systems have universally concluded that they "meet or exceed" the level of security that the public bodies can achieve on their own. Kukowski also notes that Taser "provided a significant discount" to London's Metropolitan Police in order to secure the contract. The company's hope is that the storied history of the Met and its reputation for leading the way with best practices for law enforcement will stimulate others to follow.

The trial scheme launching today will last for a year and will be assessed by the London Mayor's Office for Policing and Crime and the College of Policing. Interim reports will be delivered after three months and then again after six, with the whole project being scrutinized with academic rigor. In the absence of any unforeseen disasters, it's likely that even more cameras will start hitting London's streets a year from now, and their total would grow to over 10,000 should the Met decide to cover the entire city.