Hug it out: can art and tech ever be friends?

Share All sharing options for: Hug it out: can art and tech ever be friends?

Aza Raskin can't remember the name of one of the artists he wanted to talk about, so he's scrolling through his Twitter feed to find the name. "I definitely tweeted about it," he says. He's been in the windowless conference room tucked in the back of the Verge office for, at that point, about eight hours. The long table where Raskin, a young and industrious interface designer, and Kari Altmann, a self-described "cloud-based" artist, have been working all day is dotted with coffee mugs and a few stray bunched-up wires.

Both are locked up here in the office because they've been invited to participate in the Rhizome Seven on Seven conference, an event part hackathon, part ambassadorship. The project has a simple enough premise: pair seven artists and seven technologists into teams of two, give them a space in New York (the Verge teamed up with Rhizome to host Raskin and Altmann), and let them present whatever they come up with. It's an event well-known in circles that track experimental work at the intersection of art and technology, and even if the conference itself doesn't reach a mass audience, many of its participants are celebrities in their fields; this year they include the journalist Nick Bilton, blogger Anil Dash, and electronic musician Holly Herndon.

If the conference strives to attract a line-up of the young, the accomplished, and the early-adopting, Raskin fits right it; the son of early Apple engineer Jef Raskin, Aza dropped out of middle school to work with his father and reportedly gave his first talk on interface design at the tender age of 10. Raskin works to make technology feel more like an extension of the human brain; as he's been telling interviewers for years, he wants to be the person who makes swearing at your laptop obsolete.

By now he's been making computer interfaces more intuitive for almost two decades at places like Mozilla Labs and with his own music-streaming site, Songza. Another of his companies, Massive Health, which aimed to make people healthier by collecting and presenting data about their physical habits, was acquired in 2013 by Jawbone, where he is now "head of innovation."

Today, though, he's been chewing through something a bit outside of his comfort zone. He's been assigned to complete Rhizome's 24-hour project with Altmann, an artist who's interested in extracting a different kind of meaning from our data-saturated world. Altmann makes all kinds of things — sculptures, videos, performances — but much of her practice takes place not in a gallery but online, where she manages image blogs arranged around abstract themes. In hosting and refining these image exchanges, she hopes to glean insight into how such networks affect the internet's emergent language, particularly as it relates to memes, brands, and viral culture. For example, her 2013 project, "Soft Brand Abstracts," studied and created images of highly rebloggable "information porn"; shiny, glossy, wet-looking renderings that, she says, "aim to look as enticing as possible." Basically: the ultimate fetish objects for the digital age.

But, as Raskin noted repeatedly during the conference, he's just not really into that kind of art. "He hates conceptual art," Altmann told me. "And I hate generative art. We each think the other's is too easy." Or, as Raskin will put it later the next day for an audience at the New Museum, "I don't dislike it, it's just ... like candy."

"He hates conceptual art ... And I hate generative art."

Conference organizers insist they don't see an artist-technologist binary, but it's hard to make the case such a split doesn't exist. As Atlmann says, the divide between she and her partner is primarily an "industry divide." Art and tech are, as genres go, fairly insular ones: Silicon Valley has come under increased scrutiny in the last year for being "insular" and an "echo chamber," while the art world is regularly criticized for generating value within a small community of elite curators, collectors, and dealers.

Despite their different perspectives, there were two things Altmann and Raskin could agree on. One was a distain for autocomplete, and the other was the band Beach House. In fact, until relatively late in the day, the duo's project had been based on an experimental way to visualize a stripped-down version of one of the band's songs. But they rapidly changed course at 4PM, around the time, according to Raskin, that they started climbing up that "long worry wall." At 8PM, they had enough of a concept to explain, if not to demo completely bug-free. 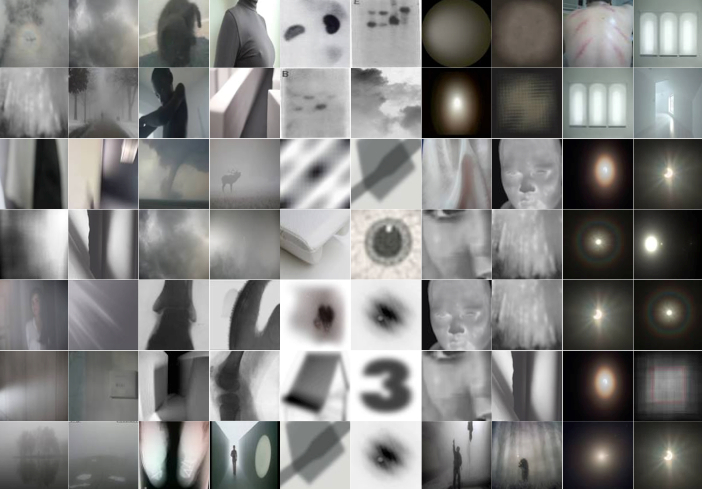 A screenshot of Raskin and Almann's "conceptual image search tool."

They call it, alternately, soft search, expanded image search, and bootleg image search. It's a "conceptual image-search tool." To use it, you pick a couple of images — for example, Miley Cyrus, the Apple logo, and a Nike swoosh, though any image file will do. Once you upload the images into the program, a machine learning program will begin to morph each image, changing each picture a little bit according to the characteristics of the others in the set. After the program runs over each image for 100 frames, it inputs the results into Google's "similar image" search, generating another set of pictures for the machine brain to run over another 100 times.

The resulting grid of images updates in real-time, growing more abstract and increasingly spooky before jumping away on another visual tangent, crawling the internet for similar material. The artists say over time the program would "learn your taste" based on previously uploaded images. As Raskin would later note, "You're basically teaching this tiny AI, this little kid brain, with a set of visual metaphors." But now, at 8PM, he's leaving the Verge office and the project is far from done. They would be up until 4AM, running through the program and testing it for any bugs, tweaking slides for their presentation.

The next day, Raskin and Altmann, along with the other six teams, presented their creations at The New Museum. The small theater was fully sold out, most seats occupied by smartly dressed startup kids from Manhattan's optimistically named "Silicon Alley" and young art wonks, one of whom wore a white 3D-printed helmet made of stitched-together renders of her own face.

When the duo took the stage, they posited that the tool could be used in a number of scenarios — Altmann says she could see it being used by teams of designers in creative agencies or in research and development labs to shake up the creative process. "The reason we came to the project," she says, "is that we're both interested in the idea of ‘similar' content ... We have different ideas about it, but we think Google reflecting your habits back to you is actually Google changing your habits."

Raskin explained that in many instances part of his job as a UI designer has been to predict user behavior, but that he has grown uncomfortable with some aspects of that role. He uses the example of the predictive browser — if, at 3PM most afternoons you visit Facebook, should a browser suggest Facebook to you every afternoon around that time? He's not so sure. "We shouldn't inject anything into our train of thought," he said onstage. "That's something that's uniquely ours ... So the tragedy of autocomplete is that even if it gets you to a place faster, it's also making you think more predictably, and basically about what somebody else wants."

Once or twice, the conference's organizers pointed to the '70s-era Los Angeles-based Art and Technology Lab, a program that similarly aimed to bring the two disciplines together. But 50 years ago, merging art and tech was a different sort of practice, often a way to augment existing art forms using new tools. But this isn't John Cage using a more interesting kind of sound transmission. Seven on Seven may be an art jam, but it's also bringing together influential people from some of the most powerful industries in the world — employees of Jawbone, Wordpress, and Snapchat, the latter of which just last week released an update so exciting students hid under their desks to download it.

As Raskin noted during the presentation, he sometimes feels as though "the best minds of our generation, through no fault of their own, are working on things that steal our attention." After 10 hours in a room, focusing intently on a single-serving collaboration with an artist he'd never met, it wasn't exactly like much of that changed. But for two industries often chained to the demands of a narrow world, Seven on Seven did provide some room to stretch out.