What does the crisis in Ukraine mean for the world's worst nuclear disaster?

Cleanup efforts are inching forward at Chernobyl, but political instability has raised questions about its future

Share All sharing options for: What does the crisis in Ukraine mean for the world's worst nuclear disaster?

Last month marked 28 years since the Chernobyl disaster in Ukraine, the most devastating nuclear accident in history. A series of explosions at the power plant killed 31 workers and released cancer-causing radiation into the atmosphere — many times more than even the Fukushima disaster of 2011 — leading to widespread health and environmental problems that are still being accounted for. Villages surrounding the site have long been abandoned, the environment is poisoned, and officials are still working to clean up the site — a process that is expected to take decades.

The completion of a gigantic protective arch will mark a major step toward that goal. When construction finishes, the 32,000-ton structure will completely seal off the radioactive debris of a nuclear reactor that exploded on that fateful night in 1986, allowing Ukraine to safely begin the decommissioning process. But the project has already seen several delays, and it carries a hefty $2 billion price tag. And as unrest continues to unfurl across Ukraine, hampering an already weak economy, there are fears that cleanup efforts may face further setbacks.

"It's complicated to begin with," says Sharon Squassoni, director of the Proliferation Prevention program at the Center for Strategic and International Studies. "Then you add the possibility of political or military turmoil — it's going to make things even tougher."

"Are we concerned about the situation? Of course we are concerned."

The Ukraine government commissioned the arch in 1992 to replace the existing "sarcophagus" shelter covering the destroyed Unit 4 reactor. The structure was hastily built as an emergency measure following the explosions at Chernobyl, and over time began showing signs of structural weakness. If it collapses, officials fear, it could release dangerous radioactive contaminants into the atmosphere.

The arch is designed to put those fears to bed. Known as the New Safe Confinement, it will stand more than 350 feet high when completed — taller than the Statue of Liberty — covering the building where the reactor is stored. This will allow workers to begin dismantling Unit 4 and remove any nuclear waste — an even longer, and more difficult task. The European Bank for Reconstruction and Development (EBRD), which oversees financing for the project, says the confinement is built to last 100 years because that's how long the cleanup could take. 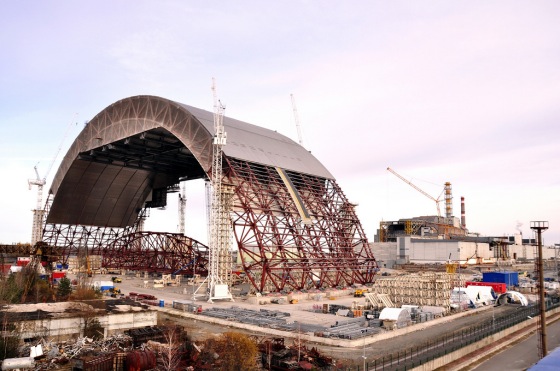 Even in a relatively stable Ukraine, it took two decades for construction to begin, and the project has since faced several delays due to both technical challenges and funding shortfalls. Completion was originally targeted for 2015, but has now been pushed back to 2017. Vince Novak, director of nuclear safety at the EBRD, says he's "highly confident" that the new target will be met, even amid Ukraine's turbulent political climate. He says the project has continued without interruption since unrest broke out, adding that companies and donor governments maintain "full commitment," though he acknowledges some uncertainty.

"Are we concerned about the situation? Of course we are concerned, says Novak. "It is unfortunately a situation which can further deteriorate and it's very difficult, then, to predict what the impacts on our project will be."

Ukraine's turmoil began late last year, when anti-government protests erupted over a decision to abandon an economic deal with the European Union and forge closer ties with Russia. The demonstrations led to the ouster of President Viktor Yanukovych in February, following violent clashes with police, and Ukraine's interim government has struggled to maintain order in the country's eastern region, where pro-Russian insurgents are demanding greater political autonomy.

"The less money we have the less could be done."

Ukraine's acting minister of foreign affairs has warned that the country's nuclear facilities may be at risk in the event of war, but experts say Chernobyl — which hasn't produced power since 2000 — is an unlikely target. The site is located near Ukraine's northern border with Belarus, far removed from the chaos that swirls in the east, and it remains heavily guarded. Striking Chernobyl or any of Ukraine's 15 other nuclear reactors would also carry serious environmental ramifications for Russia — not to mention international condemnation — and Squassoni says the Russian forces are "sophisticated enough" to avoid them.

According to a 2005 report from the International Atomic Energy Agency, Ukraine spends 5 to 7 percent of its budget every year on Chernobyl-related programs — including cleanup efforts, research, and care for affected civilians — and pays roughly the same percentage of all direct contributions to the confinement project. (Europe and the US are among the biggest donors, according to the EBRD, rounding out a group of about 40 countries, including Russia.)

But Ukraine's limping economy has raised doubts about Chernobyl's funding going forward. The country faces huge debt and a growing budget deficit, and conditions have only worsened during this year's crisis.

"Any unrest affects a country's economy, and remediation is not a profitable activity," says Oleg Nasvit, a nuclear physicist at the National Institute for Strategic Studies in Kiev. "To carry it out, we need funding from the state budget. The less money we have the less could be done."

"This is going to be a challenge for years to come."

The International Monetary Fund has pledged $17 billion over the next two years to help keep Ukraine's economy afloat, and there are so far no signs that the country will reduce its Chernobyl-related spending. But Ukraine's burden will become greater once construction of the confinement is finished. At that point, the EBRD and its donor countries will step aside, and Ukraine will be responsible for decommissioning the site and removing all radioactive materials.

"All of that is incredibly expensive and time-consuming," Squassoni says. "This is going to be a challenge for them for years to come. And if you're worried about your political survival I'd say chances are you're not going to put this very high on the list."

Yet Novak remains confident that Ukraine and other countries will continue to prioritize the cleanup efforts at Chernobyl, even as regional tensions continue to flare. Radiation levels across Europe spiked when the plant erupted in flames 28 years ago, underscoring the fact that Chernobyl is not Ukraine's problem alone.

"You must not forget that this is a project about nuclear safety," Novak says. "And its importance transcends borders and transcends political divisions and differences."