On an unusually gusty San Francisco day, a beaming new white Ford Explorer sits idling in a tent in front of me. It's the first of what Lyft hopes will be a fleet of vehicles people will pay more to ride than the smaller, less luxurious Toyota Priuses and Corollas that make up the bulk of the cars in its network. Short of the word "Explorer" emblazoned in chrome in the back and on the side mirrors, the outside's been stripped of nearly all its branding. The typical blue Ford oval in the back has been hidden, and in the front is a jet black grill with a diminutive, off-center silver mustache - a classy reimagining of Lyft's signature pink, furry logo.

Not aimed at bargain passengers

This is Lyft Plus, and it will soon be an option in San Francisco at twice the price of what Lyft currently charges for set-price hauls. Similar to Uber's black SUVs, it's aimed less at the people who would normally shell out for a taxi, and more for those who are having a night out (on a date or in a group), or just don't mind spending more for luxury. If Lyft's pilot of Plus is successful, it could roll out to additional cities.

What you get for the extra rate is a white Ford Explorer that fits six people. It's also been gussied up with diamond-stitched leather seats, dark gray suede across the ceiling, silver and black rims, and music from Spotify's premium service. There are other little touches too, like chocolates, bottled water, and a universal phone charger that pokes out of the center armrest. 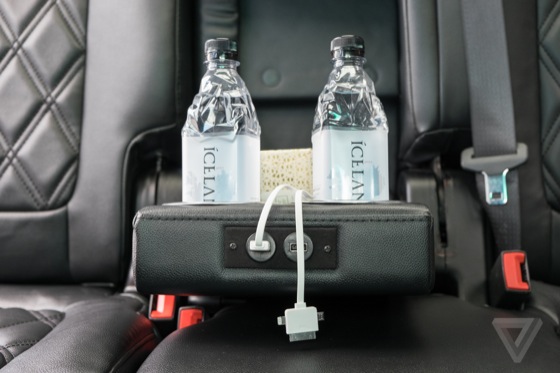 The new service was developed primarily because Lyft is growing like crazy, both in staff size and customer base. So far it's in 60 markets, and has tallied up "millions" of rides shared. The company's new office in the Mission District of San Francisco, where the car in front of me is parked, opened just two weeks ago, and already there's talk of moving somewhere bigger within a year.

Paying for all that is more than $330 million in funding, with $250 million of that coming as part of a Series D round last month. The company's said it plans to use the funds to expand its operations to new cities, and with good reason: as the number of people who want to use the service has grown, so are the riders who want to travel in groups. The requirement to be a driver has always been that you could fit four passengers, but as Lyft's gotten more popular, the company realized it was giving up business to competitors.

"We saw huge holes with people who wanted to take a whole group, or to go to the airport with luggage, or move something," Lyft's Ethan Eyler explains to me while we both sit in the back seat of the Plus vehicle. "All these seats fold down," he adds, noting you could even do a move using one of these if you wanted to.

Eyler was the one who created the mustache for cars (also known as a "carstache"), the pink version of which immediately became Lyft's brand and persona. Part of his job as the company's in-house "inventor" was to figure out what would go into making the higher-end rides jibe with the company's scrappy persona. He's the one sourcing the chocolate bars, and who worked with California car shop West Coast Customs to select the vehicles and trim they'd end up using, though he says the actual interior design and matte white paintjob were outside ideas. 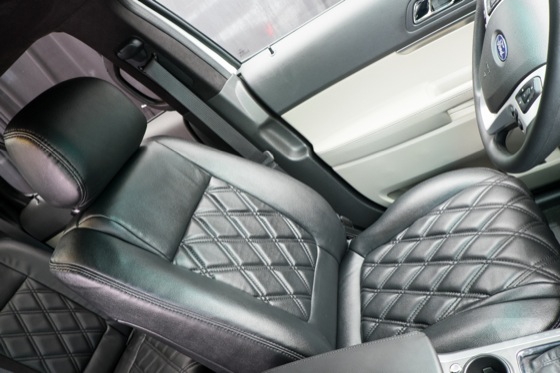 The cars are destined to be purchased by Lyft drivers, the company says. It's purchasing the vehicles and having them outfitted, but then drivers have the opportunity to buy them and drive in them. The first crop of drivers given the chance to buy into that are some of the oldest and most active, Lyft says; how much they'll pay for that privilege, the company won't say.

Drivers are basically investing in Lyft

In return for their service, Lyft Plus drivers have the chance to make more than they would as a typical Lyft driver who charges by distance (some also drive for a donation depending on what city the service is in). For Lyft Plus, that works out to 50 cents per minute and $3 per mile, with a $5 pickup fee and $10 minimum per ride ride. Even with those rates, Lyft says Lyft Plus will cost 20 percent less than Uber's black car service, and 40 percent less than its SUV offering. It also doesn't plan to adjust those prices based on supply and demand like its "Prime Time" mode, or what Uber does with its surge pricing, at least not until there are more of these new cars on the road.

All these differences could help set Lyft Plus apart in an industry that's quickly becoming crowded with both entry-level and luxury options. Where Lyft found a way to shake up the established world of taxis and private car companies with something that could cost less and give normal drivers a way to make money, it now hopes to do the same for those with cash to burn. Even so, Eyler hopes Plus will still feel like a casual and communal experience.

"So much of it is about socializing, and about who you're riding along with too," he says. "We still have the ‘stache magic."