Don't call it a reading app: Instapaper grows up

Share All sharing options for: Don't call it a reading app: Instapaper grows up

Instapaper began as a solution to a single, simple problem: developer Marco Arment couldn't find anything to read on the train, so he built a website that stored links for him to come back to later. But over the last seven years it's evolved into a full-featured app that de-clutters the internet and makes everything a little more pleasant to read. Last fall the service got a new life at Digg and Dots owner Betaworks, which today took the first step in turning Instapaper into something much more ambitious than a read-it-later app.

Instapaper 5.2 is, on one hand, a visual overhaul of the service's existing features. There's a new, simplified icon, a two-paned view that is more useful and more consistent across platforms, and a slightly more cartoonishly friendly interface. The website, largely forgotten since Arment switched his focus to building mobile apps, has been completely redone. Things as simple as dragging and dropping items between folders are finally present; the web app now serves as the primary organizational tool for Instapaper.

The best new feature is Highlights, the familiar yellow-pen markup, which Brian Donohue tells me is long overdue. Donohue leads the Instapaper team at Betaworks, and says Highlights has been in the works basically since it acquired Instapaper. Virtually every book-reading service, from Amazon to Oyster, offers a way to store and share highlights — Instapaper's system works basically the same way, and Donohue can't believe his luck that none of its more direct competitors had done it yet. "It’s really incredible to me that there’s been no save-for-later app that has implemented highlights somehow." It's a big competitive advantage for Instapaper over an app like Pocket, which has become the go-to app for simply reading things later. 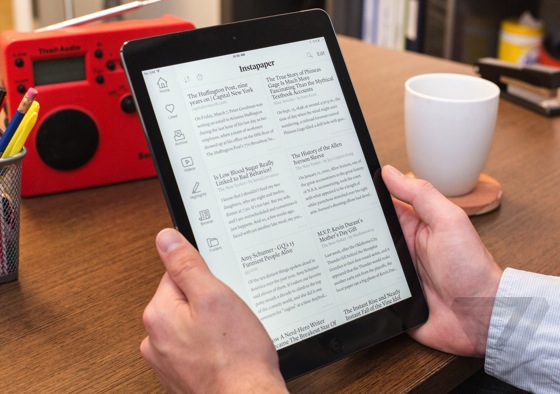 When you select a passage in Instapaper, it automatically goes to your Highlights folder, a running list of everything you've stored. You can also choose to automatically tweet what you highlight, or send it to Evernote or Tumblr. Eventually, Donohue says, you'll be able to take notes alongside the highlights, or send them straight to your friends. (Instapaper's long had small bits of social-networking features, but Donohue says that's about to become a much bigger focus.)

Instapaper's role in its users' lives has changed drastically over the last few years. In 2007, "the mobile web" was barely a concept, and most websites were ugly and unreadable on small screens. But as the web has become cleaner, simpler, and more responsive, Donohue and his team have had to find other ways to improve upon the experience. "Things like highlighting," he says, "and doing annotations — that’s something that’s a ways away on the mobile web." Instapaper can offer it for every site on the web in a cleaner, simpler, centralized way. 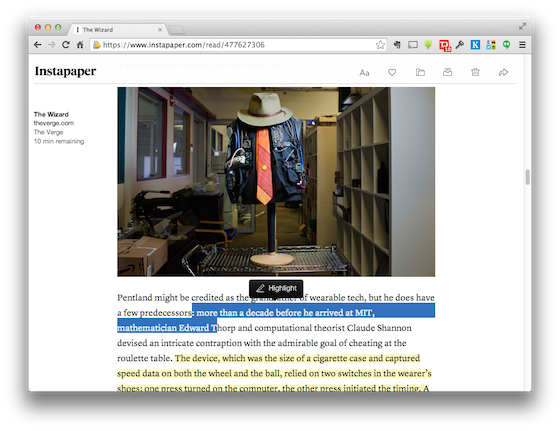 Highlights turns Instapaper into a much better, more organized research and reading tool, but the team has wider aspirations. "There are basically two main use cases for Instapaper," Donohue says. Some save magazine stories to read later, while others are "just bookmarking. People save — it’s not articles, it’s Amazon URLs, and daily deals sites, and not really anything you could actually read." So the Betaworks team is focused on extending and improving that experience — Donohue mentions a Fast Company article that calls Stitcher "the Instapaper for audio," and makes clear that he'd much rather Instapaper be the Instapaper for audio. "I’m not saying we want to compete with Stitcher, but we want you to be able to save any type of web content and present that to you in a really seamless way." His team has long been thinking about how to save and present video — which is far more complex than text even before you get into copyright issues — plus lots of other types of content.

Ultimately, Instapaper is still a service for people who read, who want to find and save things and read them in a simple, lovely way. And the new Instapaper does that better than ever. But the apps that do that are both more plentiful and less necessary than ever, and Instapaper's moving slowly away from competing with Pocket and toward a broader future. "Someone said it should be like the file system for web content," Donohue tells me, "sort of like the Dropbox for web content. And I kind of really like that."

It's a big move, for a company that started when one guy got bored on the train into Manhattan. But just as many people once needed a way to clear the clutter and just read, the new Instapaper might quickly become indispensable too.