Taking photos of people or products against a clean white background is perhaps one of the most common studio photography techniques in use — and an essential skill for any studio photographer using off-camera flashes and lighting. That hasn't stopped the US Patent and Trademark Office from granting Amazon one of the most bizarre and seemingly needless patents we've heard of in a long time: a studio lighting setup that allows photographers to "achieve a desired effect of a substantially seamless background." Yes, Amazon now holds a patent for taking photos with a "near perfect" white backdrop. 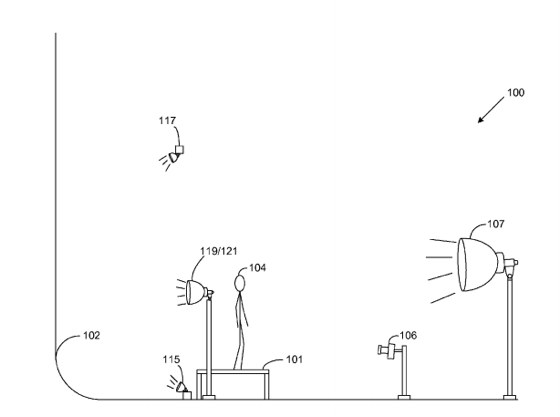 The details of the patent itself are slightly more focused, calling out specific lighting placement and even the placement of a 21-inch raised platform nine feet from the backdrop for the subject to stand on. The patent's diagrams show very specific numbers and placements of the light sources, but those details aren't the point. Enforcing such a patent seems near-impossible, given the nature of such photos — with a pure white background, there's no way to know if the photographer is following the specific setup that Amazon patented.

Looks like I’ll be infringing on a patent and not giving two f#cks about doing so. http://t.co/xxZWvNGqlf

Regardless of enforceability, the idea of patenting a fundamental and basic photography setup is hard to fathom, particularly when you consider that Amazon filed for the patent in November of 2011. If the USPTO had asked around a little, it probably could have found dozens of photographers who have used nearly identical setups for years — particularly given that the ability to manipulate a background from pure white all the way down to black is something every photographer masters when learning how to use strobes.