Apple is reportedly negotiating the purchase of Beats for $3.2 billion, according to a new report from The Financial Times. The deal would include both the streaming Beats Music subscription service, as well as the part of the company that produces headphones and speakers. The move, which would be Apple's largest acquisition ever, could be announced as soon as next week, the paper says. Citing sources, Bloomberg, The Wall Street Journal, and Recode also confirmed that the deal was nearing completion.

Apple already sells Beats products in its retail stores, and just last month Beats began offering a way to subscribe to its streaming music service using Apple's in-app purchase, something that gives Apple a cut of its subscription revenue. That service competes with Apple's iTunes Radio in part by offering playlists curated by celebrities and musicians, however Beats requires a paid plan that gives users full access to that entire streaming music catalog. In recent months, Apple has said to be developing its own similar service, possibly for use on Android devices, that would augment its own free service.

The music aspect of the deal would come amid declining album and individual track sales, which according to Nielsen SoundScan, were were down 13 and 11 percent respectively in the US for the first eight weeks of the year. Apple's own streaming service iTunes Radio only came out about eight months ago with iOS 7. Apple's used it to push people to buy full versions of the songs from iTunes, though the service has been limited to the US, and only recently Australia. 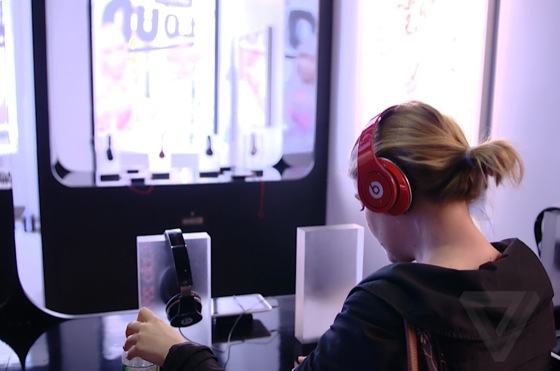 Beats was cofounded in 2008 by music mogul Jimmy Iovine and rapper Dr. Dre, and initially only made headphones manufactured by Monster Cable. It later began producing its own hardware, including noise-cancelling headphones and its Beats Pill Bluetooth speaker.

Executives from Apple and Beats reportedly met several times early last year, ahead of when Beats went on to launch its streamed music service. According to Reuters, that included meetings between Apple CEO Tim Cook and Beats' Iovine, as well as Apple's iTunes and cloud services chief Eddy Cue.

Apple and Beats execs were meeting in 2013

Making the potential deal intriguing is that Beats has offered some of its technology to Apple rivals in the past. Besides the streaming music app (which is available on Android and Windows Phone), that includes a $300 million deal to put Beats Audio in HTC phones beginning in 2011, and ended just last September. It's also in the business of making portable speakers, which Apple failed at spectacularly with the iPod Hi-Fi in 2006.

Apple's largest acquisition to date was NeXT computer in 1997, which brought cofounder Steve Jobs back into the company, and on a rapid trajectory to become its CEO. Apple spent $404 million to buy NeXT, a figure now worth close to $600 million when adjusted for inflation. The second closest deal was Israeli flash memory maker Anobit, which Apple scooped up for a reported $390 million in December 2011. More recently the company's been buying up a collection of smaller companies without formally announcing them. In an interview last month, Cook said the company had acquired 24 companies in the past 18 months, and was "on the prowl."