Share All sharing options for: Spec Sheet: the coolest TVs money can buy

Bang & Olufsen unveiled its first 4K television set this week, and it looks to be about as impressive as anyone familiar with the company's usual products would have expected. Of course, it also has the high price tag to back it up — much like many of the other TVs out there that are trying something a little bit different. Curious to know what other wild and wildly expensive TVs you can buy right now? Take a look below, beginning with Bang & Olufsen's latest.

Click on any image in this article to see full specs on the TVs shown.

Surprisingly, the 55-inch BeoVision Avant is actually one of the least expensive sets that we're looking at — on its face, at least. The 4K LED TV costs $7,995, though that's for the TV alone. Buyers will also want to get a stand for it, which run $895 at the lowest, as it's those stands that give the Avant its flagship feature: the ability to automatically turn itself toward where viewers are seated.

Beyond that, the Avant has what on paper looks to be a fine set of built-in speakers, including tweeters, mid-range, and bass units throughout. More importantly though, buying an Avant means you'll be able to buy into Bang & Olufsen's equally high-end speaker system. Sure, that's going to make things all the more expensive — but you probably aren't buying the Avant without plans for an amazing living room setup.

Curved displays like these are supposed to make watching the TV feel a bit more immersive, though personal mileage with that seems to vary. These certainly aren't the only curved TVs on the market either, but they are fairly representative of what you might find for now. If this year's CES was any indication, there's a lot more in store when it comes to curved sets — though like 3D, it may be hard to convince all buyers that it's a must-have feature.

For a brief while, 85 inches was as big as it went for 4K TVs. Just about every major manufacturer has surpassed that now, but these huge TVs are actually available to buy and in a few different options. One of those, the 84LM9600 (above right), comes from LG. It's an LED set with support for 3D on its ever-so-slightly smaller 84-inch display. LG lists it for nearly $17,000 right now, though it's $4,000 less than that on Amazon. If that's something you have the space for, there's good reason to want one: at this size and resolution, sets really start to deliver the type of cinematic experience that you've always dreamed of taking home from the theater.

Sony has a similar set that's supposed to be coming out in the near future too. The XBR85X950B (above left) has an 85-inch LED display and support for 3D. It's listed as just under $25,0000 on Amazon right now, so anyone buying in this size range should appreciate that others have already been on the market. But hey, Sony's set says it supports Netflix in 4K — and that's a pretty big bonus. Most sets at this price range have picture quality to back them up too, and Sony's really stand out with dynamic range that can almost seem unreal. 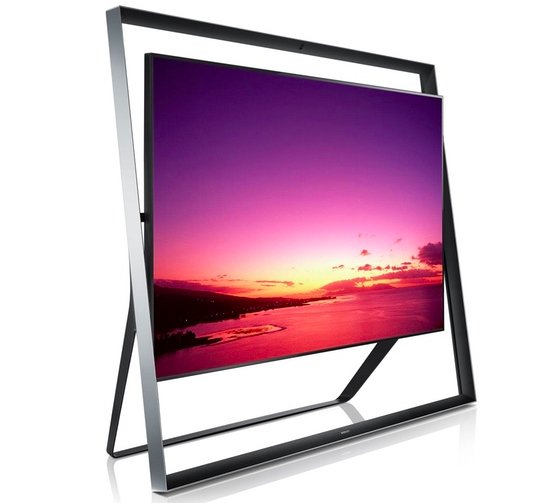 Samsung's S9 isn't all that much different from the Sony set above: it has an 85-inch, 4K, 3D, LED display and refresh rates up to 120Hz. Where it really stands apart is its unconventional "easel" design: the set looks a bit like it's suspended inside of a hollow picture frame, with a large stand propping it up from behind. Like the others of its size, it's an impressive set to watch — only it's offered it in a far more eye-catching design, though certainly not a design that's up everyone's alley. It's also the most expensive of the sets, costing around $40,000.

That's far from the top of the line when it comes to giant and high-end TVs, but you'd probably be looking at models such as these if you were in the market for something quite so impressive today. Plenty of other big sets are coming down the road though: from 105-inch TVs to bendable ones, there continues to be a pretty much nonstop parade of unlikely and expensive TVs that walk a fine line between sets you'd want to buy and sets that exist just to showcase a company's impressive new tech.

William Savona contributed to this report.

If you want to learn more about any of the products mentioned above, all of our information on them can be found through the database box located beneath the article. For more on TVs and just about every product around, you can check out the full Verge Database right here.