SwiftKey for Android is now free with paid keyboard themes

SwiftKey for Android is now free with paid keyboard themes

SwiftKey is doing something unusual. It's long been one of the most popular paid Android add-ons to date, but apparently that's not good enough. The company is dropping the price of its keyboard completely, offering it for free worldwide. Those who get the keyboard for free beginning today get the same thing as someone who paid a few dollars a week (or years) ago.

So what's the catch? SwiftKey plans to make its money by selling keyboard themes, which can completely change your keyboard. For about a buck each (or a few dollars for sets of themes), SwiftKey hopes you'll be willing to shell out for access to designs that will change the look of something you use on your phone numerous times each day. That's in place of the $4 people would typically pay to get the app in the first place.

Why is SwiftKey doing this? According to the company, additional styles were the most requested feature, and more than half of its paying users change the theme to something besides the one that comes out of the box. SwiftKey also thinks it's nailed the primary technologies that run behind the scenes of its software keyboards, and now wants to put a greater effort into how it looks.

"We're investing in design. This is a critical shift for us," SwiftKey's chief marketing officer, Joe Braidwood, says. "Themes change this concept of the keyboard as a functional place, and change it to a destination."

Those themes have been created in-house by designer Scott Weiss, who joined the company last December, following stints at Symbian, Microsoft, and Apple. His group has created more than 50 themes, a number the company expects to build on over time. Those who bought into the service early on get a free "premiere pack" that includes 10 themes, which will cost everyone else $4.99 as an in-app-purchase. The rest will cost about a dollar each, or in curated collections a la VSCO Cam's filters.

Beyond the themes, Braidwood says the price drop and built-in store is part of a larger effort to get into developing markets, places where people are typically (and historically) less willing to spend money on an augmented version of something that already comes on their phone or tablet. 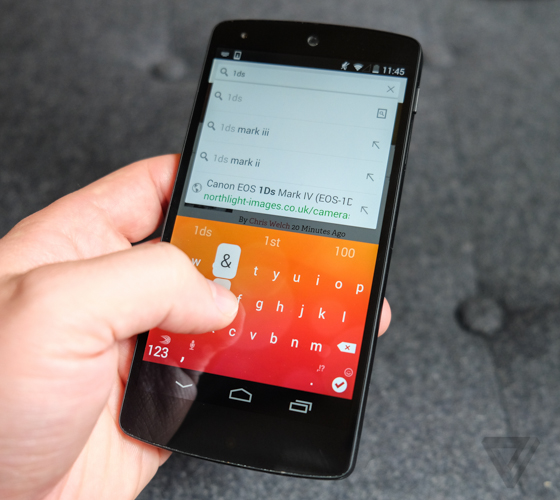 The big question, of course, is what kind of message this sends to other would-be Android app startups. If a successful company like SwiftKey needs to change course by becoming a freemium app, will others give up on the idea of trying to make people pay for customization software out of the gate? In SwiftKey's case, the data backs that case up. The company's keyboard has been installed on more than 200 million devices, but just 6 million users have actually bought it. Braidwood says that by building a theme store and making a better way to get there, more people could end up spending money.

SwiftKey's new plan comes as the company readies a keyboard for Apple devices. Last week, Apple announced plans to let third-party software keyboard makers onto its devices as part of iOS 8, which is coming out this fall. SwiftKey and others are already at work on bringing their Android creations over for what could be a land grab of new users, but themes and the free price tag may not be there from the start.