When we first saw John Carmack's version of what would become the Oculus Rift, it was playing a copy of Doom 3. But over time, developers realized that motion sickness and outmoded interfaces made first-person action games a tough sell. At the 2014 Game Developers Conference, Oculus declared that VR was more of a "seated experience," putting you in cockpits and on couches.

Then, at E3, they decided to send you running around a deserted spaceship. Since being acquired by Facebook, Oculus has rapidly ramped up its hiring, recruiting the likes of former THQ head Jason Rubin to work on publishing dedicated VR titles. Company CEO Brendan Iribe is cagey about what this means for the product, though he emphasizes that it's still focused firmly on games. He wouldn't comment on rumors that Oculus is working with Samsung on a mobile headset, saying only that the company has worked with many partners.

Bullets whistle past your ear

According to Oculus, hardware isn't the main issue right now. With the fundamental technology in place, it's turned to the question of what people will play and how they'll access it. The company has been working on a Rift interface to replace the current clunky system of starting games from the desktop, but it's supposedly still in the design stage. Iribe wouldn't rule out 2014 as a shipping date for the final product, but he said that this year is mostly about the development kit. Along with that interface, Oculus has been aggressively building a catalog, and those efforts have borne fruit at E3. The company is showing off three games: third-person platformer Lucky's Tale, survival horror game Alien: Isolation, and bullet time shooter Superhot. And with them, they've made their strongest case so far for the Rift.

Virtual reality often gets talked about as an experience for the eyes alone, but 3D sound is behind the best section of the demo. In Superhot, enemies are trying to shoot you, but time moves only when you do. The result is like an extended gunfight from The Matrix. You carefully feint and dodge your way down a hallway, leaning and ducking to avoid bullets — it's a very cool use of the newly added head-tracking technology. But the best part is that if a bullet gets too close, you'll hear it whistle past your ear. I wasn't expecting this when it happened, and it turned an abstract video game gunfight into something that felt like it could genuinely affect my body.

Lucky's Tale is unlike Superhot in almost every way. Developed by the creator of Words with Friends, it's a cute and straightforward game that feels like looking in on a diorama. In it, you guide an anthropomorphic fox around a cartoon garden and forest; if you look at the fox, he'll use the Oculus' gaze tracking to stare right back at you. I didn't spend enough time with it to evaluate its merits as a platformer, but as a Rift demo, it showed how an omniscient third-person perspective can remain immersive.

For early enthusiasts of the Oculus Rift, however, Alien: Isolation is probably closest to the original promise. It's a dark, spaceship-bound survival game where you're constantly looking over your shoulder for a threat, slower than a shooter but no less atmospheric. While the game's interface still isn't optimized for the Rift, its horror elements take advantage of how close things can feel in it — namely, the creature tearing you apart. (My time was cut short by the arrival of Eric Garcetti, the mayor of Los Angeles. His reaction, after leaning around imaginary corners and crawling into a vent, was a combination of pleasant surprise and mild bemusement.) 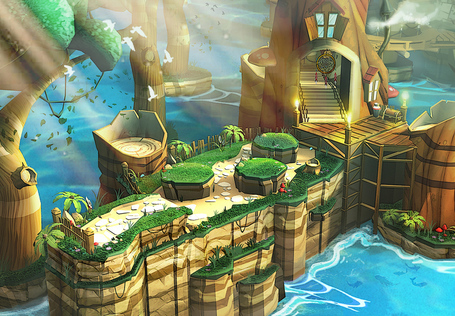 It's just realistic enough to drive the unrealism home

Alien: Isolation's most instructive flaw is that it's just realistic enough to drive home its unrealism. Lucky's Tale and Superhot are both experiences your body doesn't expect to grasp, but we understand things like walking intimately, even if we'll never meet a xenomorph. The more your avatar is doing something you could do, the more you feel the lack when you open a door but can't touch it, or curl up in a tight space while your body is comfortably sitting in a chair. Don't get me wrong, it's still fantastic. It just makes you long for something more.

Iribe sees visual immersion as the biggest component of virtual reality. Tactile feedback and motion control systems like the Omni Virtuix Treadmill and the Leap Motion, he says, provide improvements that are significant but incremental. We also aren't at a point where we can take VR graphics for granted. This week's demos are only the beginning of developers figuring out how to move, see, and act in the Rift, and the short E3 demos don't provide enough time to evaluate them as games. The most exciting part of them isn't even how well they actually work — it's seeing hard proof that people are feeling out the limits and potential of virtual reality.