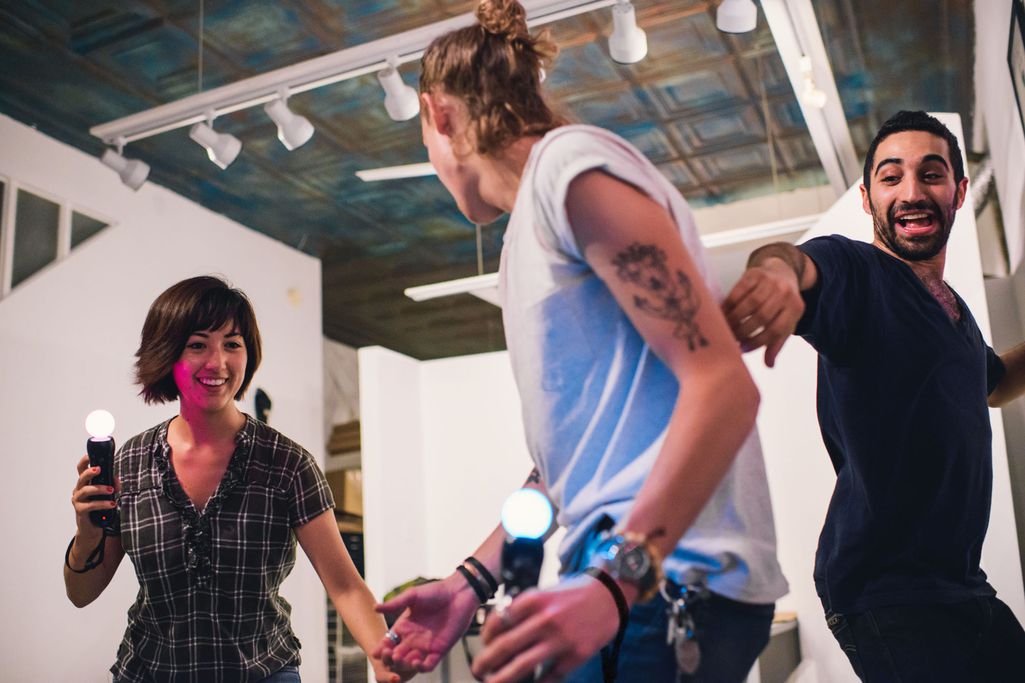 Johann Sebastian Joust is the most fun you can have with a PlayStation 4 right now, but it doesn’t have online multiplayer. It doesn’t have 1080p graphics. It doesn’t really have any graphics, in fact. It’s a game that uses your body and your physical space to create an experience like nothing else. It’s the best possible ambassador for a surprising revivalist trend in video games where friends actually play together in the same environment.

JS Joust is part of Sportsfriends, a new compilation that proves multiplayer video games don’t have to be about sitting alone in a dark room with a headset on. In JS Joust, each player is equipped with a motion controller — ideally a PlayStation Move, though regular PS3 or PS4 pads work too — and there is but one rule: don’t move your controller faster than the undulating rhythms of the Bach concertos playing in the background. Games often play out like tag in slow motion, with opponents scrambling over sofas and under tables in an attempt to knock each other out while keeping their own controller steady. You’ll find yourself stopping at nothing to win, whether you allow underhand tactics or subscribe to gentlemanly rules. It’s a hilarious, life-affirming experience that I can’t imagine anyone in the world not enjoying. And it’s all because it’s about bringing people together.

Local multiplayer didn’t die off completely with the PS3 and Xbox 360, of course — the sports and fighting genres remained as fun at parties as ever, and Nintendo practically designed the Wii around the concept. But the advent of the online first-person shooter means that games like Goldeneye 007 and Halo are no longer the preserve of late-night sessions in the dorm room. Why play for nothing with your friends when you could be fighting against the world for new perks in Call of Duty? Major developers have all but ignored local multiplayer games in recent years, and now it’s up to the indie scene to pick up the slack.

Although designer Doug Wilson has been showing off JS Joust for years, it’s taken until this month for the game to find a commercial release as part of Sportsfriends. The compilation was funded on Kickstarter back in 2012, but now finds itself launched into a very different climate — one where indie games like TowerFall, Nidhogg, and Samurai Gunn have managed to find success focusing on local multiplayer. "As many big game studios switched their focus to online multiplayer in the ’00s, the industry lost some design focus on local multiplayer specifically," Wilson tells The Verge. "Indies like me can afford to take risks that bigger studios can't. With the rise of digital distribution, indie developers can make games designed very specifically to particular purposes — like local multiplayer." Towerfall creator Matt Thorson agrees, saying that "there's a niche there waiting to be filled, because AAA games basically abandoned local multiplayer in favor of online play."

TowerFall launched as an Ouya exclusive last year, but has since found a wider audience on the PS4 and PC, and last week came to Mac and Linux. It’s a chaotic four-player action game with shades of Super Smash Bros., but its simpler rules, pixel-art graphics, and bow-and-arrow combat make it even better suited to local multiplayer. Unlike Smash Bros.’ oft-unreadable insanity, more often than not your friend will have known exactly what they were doing when they curved an arrow around a platform to take you out. And that means TowerFall sessions descend into shouts of disbelief and vows of revenge even sooner. 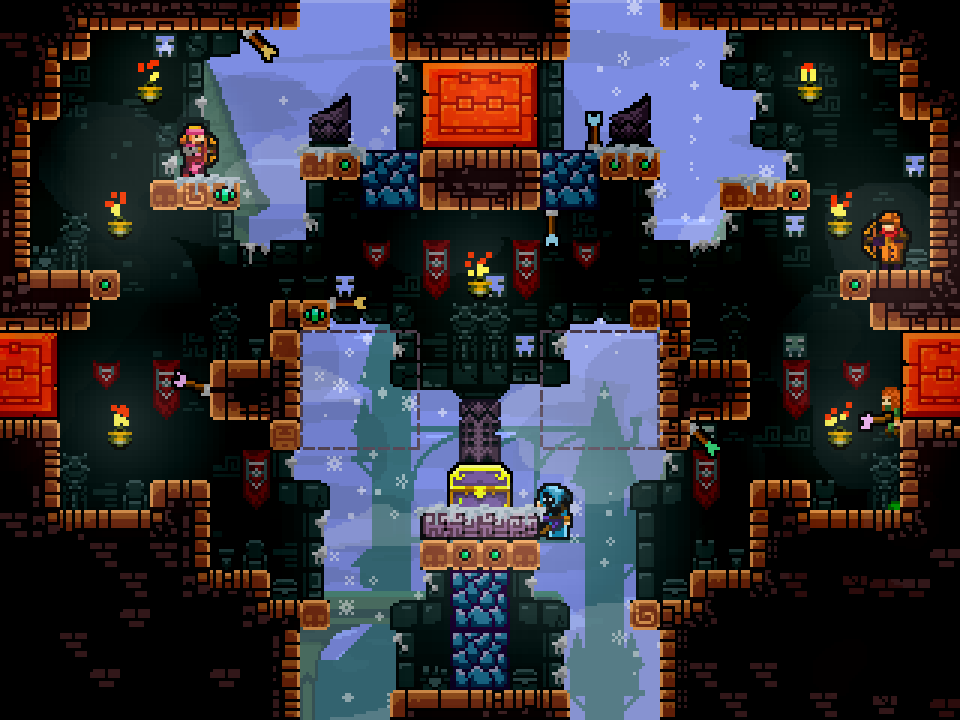 The other Sportsfriends games are no less raucous. Super Pole Riders, from QWOP creator Bennett Foddy, sees teams of one or two players attempt to score goals by using poles to move a ball along a string; the physics are maddening, but as learnable as any real sport. BaraBariBall is a retro mashup of water polo and Smash Bros., and Hokra is a minimalist two-on-two game somewhere between soccer and air hockey. Despite their lack of direct real-world analogs, all these games operate on clear, sports-like rules, making each play session as competitive as a World Cup.

"All the best local multiplayer games are specifically designed that way."

This is assuming that you can get enough people in the same room at once. It’s difficult for some people to organize this sort of gathering, which is a big reason online gaming took off in the first place — buying three extra controllers and inviting three friends over to play Mario Kart was more of a challenge than logging onto Xbox Live for a few Forza races. But the developers behind Sportsfriends never considered including online modes in their games. "All the best local multiplayer games are specifically designed that way," says Wilson. "They aren't just additional modes tacked on to existing games. Our main goal was to make the best versions of our games, whatever the consequences."

A game like JS Joust wouldn’t work online any better than Twister, of course. But as Foddy explained in a detailed article on Polygon, there are several reasons why even more traditional games like TowerFall are better off not attempting networked play. "A lot of the magic of TowerFall would be lost online, even if the lag didn't make it unplayable," agrees Thorson. "It's designed from the ground up as a local multiplayer experience. I see a lot of players claiming that adding online is a ‘might as well’ decision, but things like lag and anonymity really change how people play games and the design of TowerFall would have to compromise a lot to fit that." 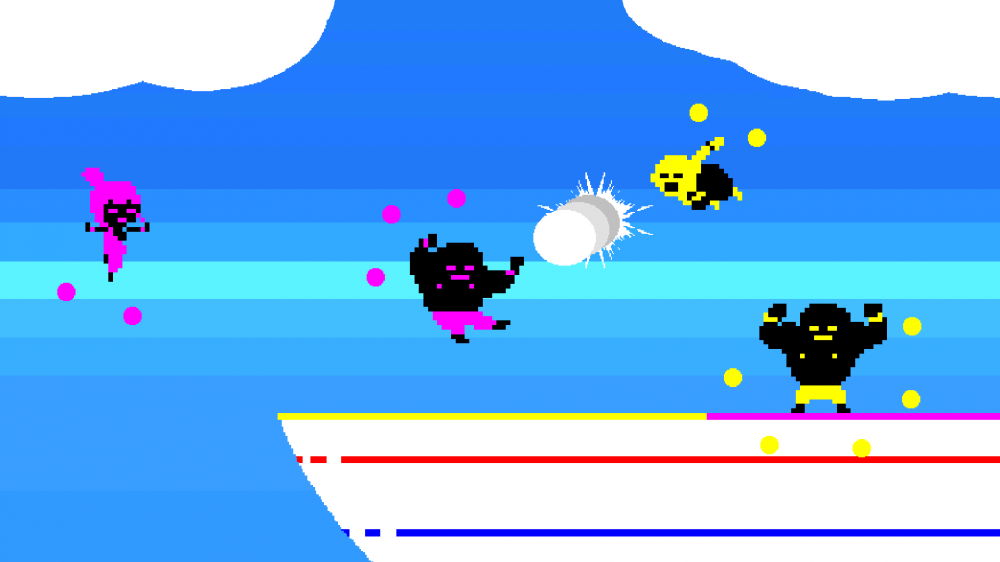 The best local multiplayer games transcend what’s possible online because real human interaction is an intrinsic part of the experience. "When we think about online experiences using traditional game controllers or a mouse-and-keyboard interface, the number of actions we can make are limited to the number of buttons we have available," says Kaho Abe, who has designed several experimental multiplayer games that haven’t been commercially released. "But when we play games in the same space, there are infinite ways we can interact with each other, beyond the technological interface we are using. Trash-talking, body language, gestures, [and] facial expressions can communicate so much."

"When we play games in the same space, there are infinite ways we can interact with each other."

Many of Abe’s titles employ special hardware, like the Kinect-powered photo booth in Ninja Shadow Warrior, and others like Don’t Wake the Bear exploit the proximity inherent in playing a two-player game on a single PS Vita screen — a concept also explored by inventive iPhone dance title Bounden. "The games I make only provide a framework in which rich interactions between players can emerge, and that emergent behavior is really the essence to these games," she says. "I design the game around the interaction I want between the players. For me it isn't about wide distribution and getting tons of people to play my game — for me, it's about making a rich, meaningful experience for the people who may play it."

That’s the same spirit that makes JS Joust the most intoxicating game you’ll play all year. "It's definitely a risk from a financial standpoint, but this wasn't primarily a commercially-minded project," says Wilson, when asked to what extent he’d considered the potential market for multiplayer-only games. "The 'potential market' isn't really the point. The whole goal of Sportsfriends was to encourage people to get together and play, in the same physical location." Take it from me — if you can make up the numbers for Sportsfriends or TowerFall, you’ll consider the PlayStation 4 the best $399.99 you ever spent.

Sportsfriends is out now for PS3 and PS4, with a PC release coming soon. TowerFall: Ascension is available for PS4, PC, Mac, Linux, and Ouya. Kaho Abe is working on a PS Vita release for Don’t Wake the Bear.