Vessyl is the smart cup that knows exactly what you're drinking

Vessyl is the smart cup that knows exactly what you're drinking

As a biomedical computing student at Queen’s University seven years ago, Justin Lee knew he wanted to build his own "internet of things" device — but he didn’t want it to be any old "smart" lamp, toaster, or light switch. "I wanted to put a computer into one of the most ubiquitous objects in the history of the human race," he says. He chose the cup. Then, he enlisted Yves Béhar, the esteemed designer behind Jawbone and the OLPC, to build it.

The result is Vessyl, a 13-ounce cup that recognizes any beverage you pour into it, displays its nutritional content, and syncs all your drinking habits to your smartphone. Let’s cut to the chase: while I only had an hour with a Vessyl prototype, I tried nearly a dozen beverages in it — and it successfully identified all of them. Within 10 seconds, the device, which currently resembles more of a Thermos than a finished product, recognized Crush orange soda, Vitamin Water XXX, Tropicana orange juice, Gatorade Cool Blue, plain-old water, and a few other beverages, all by name. Yes, this cup knows the difference between Gatorade Cool Blue and Glacier Freeze.

Vessyl can tell the difference between strong and weak coffee, Lee says, noting caffeine disparities. It can even measure the sugar, protein, calories, fat, and caffeine inside any beverage you pour into it, mass-produced or homemade. As you go about your day, the device tracks how much you’re drinking, and when you tilt Vessyl to its back, it displays a bright blue line that rises and falls to indicate your hydration level. Lee plans to ship Vessyl in early 2015 at a cost of $199.99, though preorders are available now for $99.

Building a smart cup made even more sense once Lee started thinking about the various ways we track our movement, but not what we’re eating. Even sleek apps like Up Coffee, which tracks your caffeine consumption in hopes of helping you sleep better, require you to input your consumption manually drink by drink. The big idea behind Vessyl, after all, is to provide transparency, automatically, about how terrible most of our drinking habits are. And Vessyl might just succeed. Many of us already carry around some kind of water bottle, after all, be it a Nalgene bottle or Kleen Kanteen, and Vessyl can take advantage of that habit.

Editor markup for Vessyl images. This is only visible in the story editor.

"Consumption is as important or more important as what we track through exercise," says Lee, "so we developed a sensor that could instantly analyze the nutritional content of what’s inside a beverage … on a molecular level." Lee won’t say exactly how the sensor works. He likens it to the kind of sensor you’d find in a bottling factory that analyzes batches of liquid (or other foods) to make sure each batch is consistent. "It’s the kind of sensor you’d use for quality control," Lee says, "and the sensor doesn’t degrade. It’s non-contact."

There’s no hole, or singular point where Vessyl samples what you’re drinking — it just looks like an über-modern, but empty, cup. I press Lee for more information about how it works, but he won’t budge. "The details of the sensor we’re keeping pretty close to the vest," he says, but notes that the device includes a processor and algorithms that match your beverage to one of thousands of beverages his team has tested with Vessyl. (And yes, Vessyl recognizes many kinds of beer and wine). Perhaps more impressive, however, is that Vessyl actually measures and displays the nutritional content of any beverage on the spot, even your homemade smoothie. In other words, Vessyl isn’t just drawing from its drink library when it displays nutritional data. 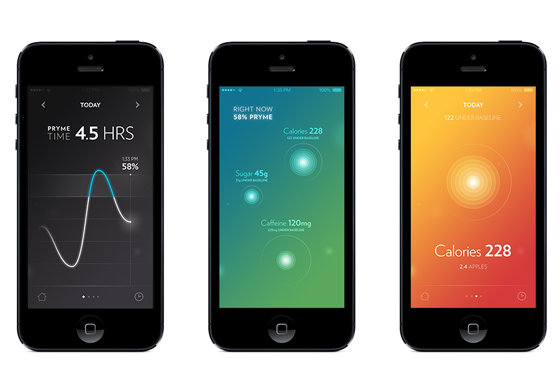 Vessyl is a neat party trick — until you start using it to actually make better habits. The content of every beverage you drink syncs back to your smartphone over Bluetooth low energy, but you can also choose one metric for the Vessyl cup to display on its side. When you pour coffee into Vessyl, for example, its display will read "coffee" — but you can choose whether Vessyl then displays the total mg of caffeine you've consumed today, or some other metric. Above this tiny display is a line that Lee calls Pryme, a measurement of how hydrated you are. Pryme is a proprietary hydration metric calculated using your height, weight, and other characteristics that you enter into the Vessyl app. 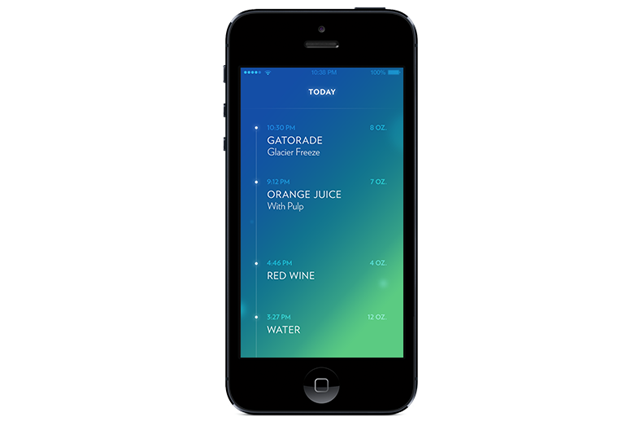 If you’re perfectly hydrated, Lee says, the Pryme bar will be full and a small blue light will illuminate above it. But as you go about your day, your Pryme will deplete. To activate the Pryme display at any time, you just pick up Vessyl and tilt it away from you. An accelerometer inside the device recognizes the gestures and illuminates the Pryme bar. The gesture is so natural and simple that some Vessyl users might not choose to check their stats inside the app, which displays your drinks over the course of a day along a sleek timeline. They might just tilt to check on their Pryme, and if they’re low, will bounce over to the kitchen for a refill.

There’s no metal wristband to strap on every morning

Vessyl’s greatest potential lies in its Pryme display. What person wouldn’t appreciate a simple indicator of how much water they should drink every day? You can indeed use Vessyl without the app after initial setup, which could truly separate Vessyl from most other fitness trackers and quantified-self gadgets on the market. Nike’s omnipresent NikeFuel points indicator is, arguably, one of the gadget’s most appealing aspects. But Vessyl’s strength is that unlike these other trackers, it combines effortless tracking with a behavior you’re already doing. There’s no metal wristband to strap on every morning, and no fob to clip to your pants pocket. If you leave Vessyl on its charging coaster while you sleep or are at your desk, you might forget that it’s a "smart cup" entirely. One 60-minute charge provides a week of power, Lee says. The big idea is to help you stay better hydrated on a daily basis, and while Vessyl won't send you a push notification quite yet when you're not drinking enough, they might not be far off.

Vessyl’s primary virtue is that it’s easy to understand. "Integrating breakthrough technology into everyday products is always a challenge, at the same time, this is exactly how design makes tech products easily adoptable in life," says Béhar. If Vessyl can succeed in accurately measuring what you’re drinking day after day, as Lee says it will, it just might be the first quantified-self tracker I could recommend to anyone.