Starbucks plans to install Powermat's wireless charging stations at its coffee stores across the US. After a small pilot run with these "Powermat Spots" — small circles that are seamlessly implanted in tables and counters — the larger rollout will kick off within Starbucks and Teavana locations in the San Francisco Bay Area. Eventually the charging stations will make their way to the company's coffee and tea shops nationwide. "2014 will be focused mainly on the west coast, but 2015 will see expansions to major metropolises across the United States," said Powermat President Daniel Schreiber in an interview with The Verge. On average, each store should receive 10 or more Powermat Spots.

The deal is a major victory for Powermat and the Power Matters Alliance, which remains embroiled in a standards war with the Wireless Power Consortium, purveyor of the Qi charging standard. And at least right now, we're at something of a stalemate. Qi's technology has been embedded into the design of far more smartphones, including the new LG G3, Nexus 5, and numerous Nokia devices. PMA's wireless charging solution hasn't enjoyed the same adoption among manufacturers; most people still need to buy a compatible case for their phone before ditching the USB cable that came with it. But Schreiber suggested the tide is turning. Consumers can buy PMA-compatible back covers for some Samsung smartphones that enable Powermat charging, and Apple — which hasn't officially picked a side in this battle — sells a Duracell Powermat iPhone case at its retail stores.

"Devices will come out with compatible technology, and we'll see an industry that's been hamstrung a bit with standards issues and conflicting implementations coalesce a common ground," Schreiber said. If you don't own a supported device, you'll be able to purchase a tiny, inexpensive receiver "ring" that plugs into your phone and lets you toss it onto the pad for recharging. (Schreiber wouldn't reveal whether Starbucks plans to sell these directly.) 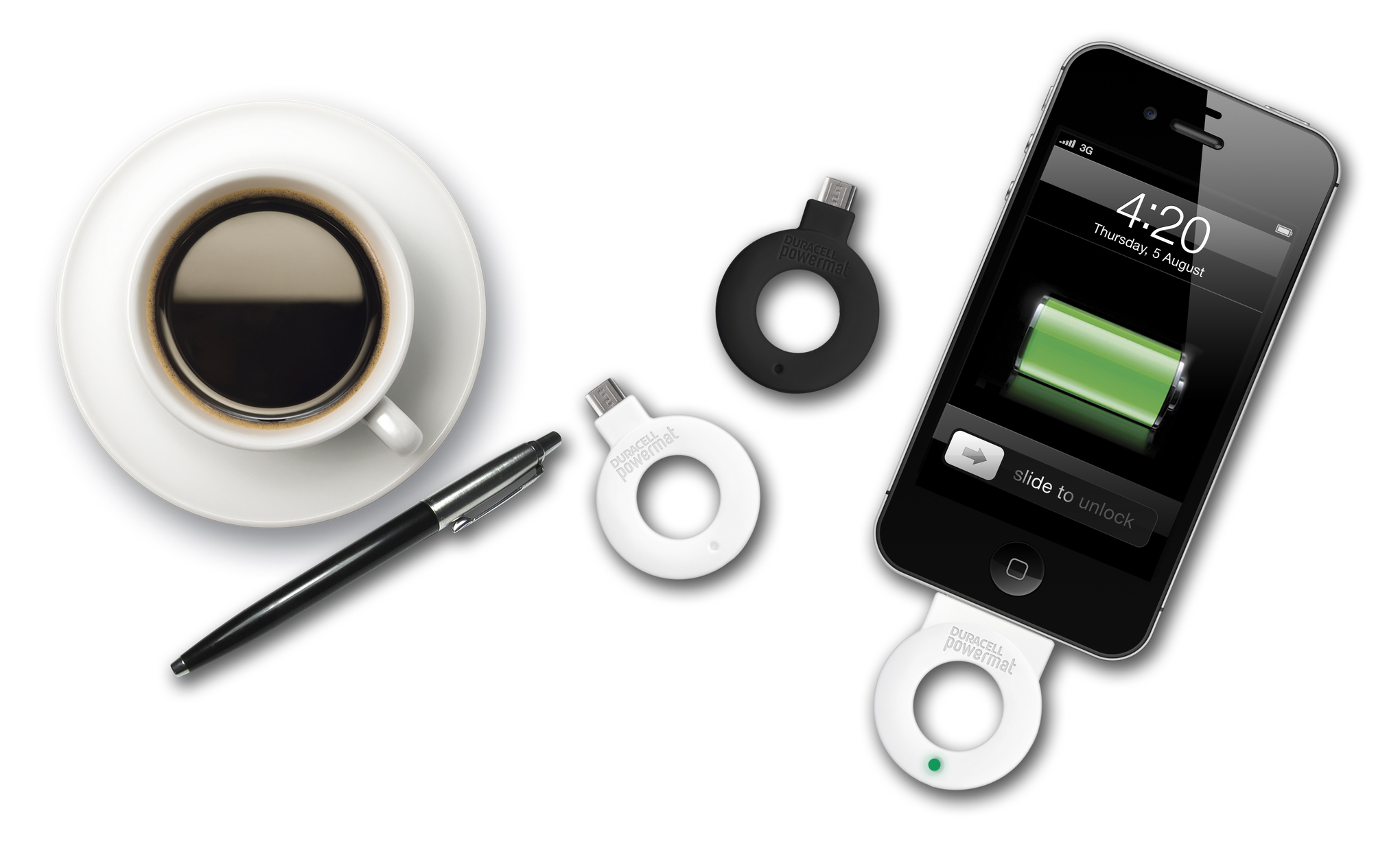 These "rings" can be used to wirelessly charge most smartphones at Starbucks.

During the early trials in Boston and San Jose, Schreiber said people typically used the Powermat Spots for an average of 15 minutes — not quite topping off the battery, but giving them enough of a boost to get them to their next destination. When I brought up the point that many recent Android phones have improved significantly in the area of battery life, Schreiber said it's still a major annoyance for consumers and manufacturers alike. Battery technology isn't evolving at the same rate as the processor in your smartphone. And one reason for the gains we've seen is obvious; the huge displays on many phones result in more space for a battery.

"The way we interact with power today is unchanged since the time of Thomas Edison," Schreiber said, returning to the overall goals of wireless charging. What Powermat and Starbucks have managed to do, according to him, is help customers move beyond "sticking two pieces of metal into a hole in the wall." They've created "something invisible and part of the furniture in the most literal sense of the word." And while the battle between PMA and Qi is by no means over, Schreiber may be right in claiming that deals like this one will decide the outcome.

Correction: The article originally stated that Samsung manufactures a PMA-compatible back cover for the Galaxy S5. Samsung makes a replacement cover that supports the Qi charging standard.