Xbox chief: 'you have to win with the gamers first'

Phil Spencer talks Kinect, 'Sunset Overdrive', and the soul of the Xbox One

Share All sharing options for: Xbox chief: 'you have to win with the gamers first'

As I slide open the door on the second floor of Microsoft's cavernous green booth at E3 2014, the gorgeous (and unreleased) game Ori and the Blind Forest fills the screen in front of me. Sometimes, Phil Spencer tells me as he shakes my hand, he likes to take a break from interviews and just play for a minute.

Spencer has been head of Xbox at Microsoft for two months, but he's been a gamer much longer. And since his promotion from head of Microsoft Studios, he's sought to remind the world that the Xbox One is, above all, a device made for gamers. He spent all 90 minutes of Xbox's E3 press conference talking about games, and he believes firmly that those games are the one and only thing that will determine the success of his console. Not TV features, not streaming services, not voice commands. Games.

A year ago, all Microsoft seemed to want to talk about was the other stuff. Now-departed Xbox head Marc Whitten shared a bold vision for the near future, in which our Xbox acts as a single, unified hub for everything we do on our TVs. Cable, games, fantasy football, even apps — they were all the future of Xbox, Whitten said. Spencer doesn't appear to have deviated from that belief, but he believes that without games none of the rest of it matters.

No one's ever going to buy the Xbox One primarily as a media device, he says. "I think it’s a difficult proposition at $499 or $399 relative to the $35 Chromecast. I do think it can be a great place to watch Amazon and Netflix and YouTube and browse the web and listen to music; I’m going to focus on being amazing at those things. But the priority has to be winning as a game console, because there are lots of other ways to watch Netflix."

"The priority has to be winning as a game console, because there are lots of other ways to watch Netflix."

Right now, the Xbox isn't winning as a game console. Sony took the stage at last year's E3 and presented its console as a love letter to gamers, a stark contrast to Microsoft's entertainment-first message. The strategy worked: the PS4 has outsold the Xbox One handily. In response, Microsoft has unbundled the Kinect and drop the Xbox One's base price to $399, and to attempt to fervently and frequently make its case as a gaming platform. 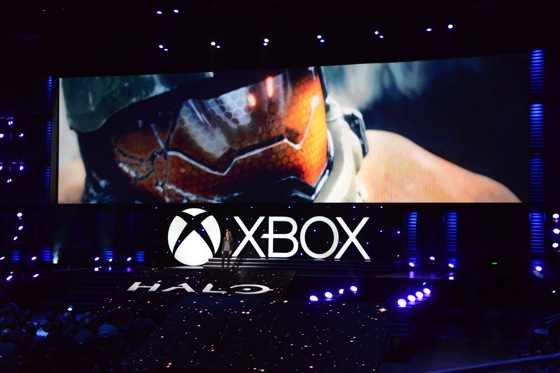 This year, the playing field is more obvious, more even. It's all about the games, and Spencer says he likes his chances. He's especially excited about Sunset Overdrive — "as someone who loves games, and as someone who funded the development of the game" — and the Master Chief Collection of Halo games. "I wanted to make sure the most iconic franchise in Xbox history lands on Xbox One at a very important time early on in the life cycle," he says. He mentions Quantum Break, Evolve, Ori, Assassin's Creed Unity, and many more, smiling with each title he names. He's confident. "I like our 2014 lineup, and I like our 2015 lineup."

The goal is simple, clearer now than ever. Microsoft wants to prove it belongs in your living room, even if it's alongside a PlayStation 4 or a Wii U. ("We’re not going to be the only place with great games," Spencer tells me. "I do not have sole ownership of all great games created.") The only way it gets there is by having games like Sunset Overdrive and Halo 5 — those are what sell consoles. Then, Spencer wants to make the Xbox the console we turn on first. For the TV integration, for the voice control — he says there have already been a billion commands issued, though many of those were probably me repeatedly shouting "Xbox Pause!" — for the streaming services and for the app store.

But mostly for the games. Spencer says Kinect will continue to be a differentiator for Xbox games, as developers continue learn to use it in subtle and natural ways. Xbox Live is a focus, too, for what it does and enables inside of games. Both are exciting, impressive technologies, but they exist in service of the games. "For better or for worse," Spencer says, "you got me as the head of Xbox." A gamer in charge of a product for gamers. "I don't think I'm going to change what I think the soul of this product is about."