DARPA is using the Oculus Rift to send troops into cyberspace

Share All sharing options for: Plan X will let soldiers fight cyberwars without a keyboard in 2017

Plan X is an ambitious scheme, designed by DARPA, to allow all branches of the US military to fight back against electronic attacks. Now DARPA has announced the plan, which aims to allow soldiers to enter a visualized version of cyberspace to repel enemy attacks, will start being rolled out to the Department of Defense and US military's Cyber Command in October 2017.

Plan X's program manager, Frank Pound, says the plan aims to "get rid of the keyboard" — rather than requiring computer-literate white hat hackers, DARPA's initiative is looking for a way to allow standard soldiers to defend against computer assaults by using technologies with intuitive interfaces to simplify the process. Pound sees the project as vital for all levels of the military. The program manager recently told the American Forces Press Service that his team was scaling the system to support more than 300,000 users, and that he wanted a Plan X system "in every military installation, every combat information center on a ship, and at the tactical level in tactical operations centers.".

One of these devices is a holographic touch table. The agency showed off a table-sized touchscreen last year that could map Wi-Fi and Bluetooth signals, but the new version is reportedly capable of creating a real-time 3D holographic image that doesn't require glasses to view. Using the table, the US Department of Defense says members of the military can visualize computer networks, interact with their assets, and plan counter-attacks. 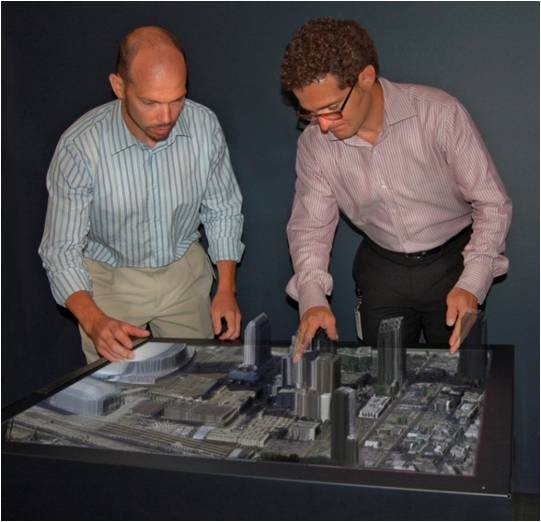 DARPA has also experimented with the Oculus Rift virtual reality device to allow soldiers to enter cyberspace. Pound says the headset can visualize electronic attacks for regular military officials by removing abstract complexities and presenting only the information required to counter enemy actions. The US Department of Defense distils the concept, describing DARPA's plan as like sending a marine with a weapon in his hand into a firefight in cyberspace.

DARPA has likened Plan X to a video game

The human element is required, Pound says, because situations could arise that an automated response system cannot plan for. "We want human beings to be able to step in and answer the really hard questions that computers aren't so good at answering right now." Humans are also capable of understanding how to limit collateral damage so only an adversary's network is targeted. DARPA has previously compared this on-the-fly assessment — and the entire Plan X project — to a video game. Assets can be ascribed points to show how valuable they are, while Plan X's inventor, Dan Roelker, likened the process of simplifying cyberspace to World of Warcraft.

A large budget cut means that although Plan X was announced in 2012, DARPA is only eight months into its ambitious project. The initiative to send soldiers to do battle in cyberspace may sound like a script for a sequel to an '80s cyberpunk movie, but program manager Pound, who describes Plan X as like Google Maps for electronic space, says the initiative could be spun off for civilian use. "The idea of a virtual world and being able to act with it and walk around in it would translate nicely into Internet terms." The agency has experience creating technology that gets adopted by civilian consumers — Pound points out that Siri was once a DARPA project, before it was given over to Apple — so civilians might soon also be able to climb inside their home networks.