Amazon Prime Music is no Spotify killer, but it doesn't need to be

Amazon Prime Music is no Spotify killer, but it doesn't need to be

It makes Prime seem like a better value, and that's everything

Amazon is getting into the streaming music game. The company has officially launched Prime Music, a new service that offers Prime customers access to over 1 million songs and hundreds of curated playlists. Today's reveal caps off weeks of rumors indicating that music would soon join the numerous perks that already come with Prime's $99 annual subscription fee. Right now those include things like expedited shipping from Amazon, on-demand movies / TV shows via Prime Instant Video, and Kindle ebook lending. But music is different. Music is indispensable. Like Instant Video before it, Prime Music is Amazon's latest attempt to shake up an industry with entrenched competition. (Hey, Spotify.) How's it looking on day one? Keep reading.

It all starts with a bit of rebranding. Amazon is bringing all of its music-related products (i.e. the Amazon MP3 store and Cloud Player) under the same banner and just calling everything by one name: Amazon Music. Much simpler, indeed. Aside from the name, nothing about either of those products is changing. You can still buy millions of tracks from the store and upload your own to the cloud. But that cloud library is now simply known as "your music." AutoRip digital copies of CDs and vinyl you've purchased from Amazon are still there, too. But now it's all one experience without superfluous brands mucking things up.

Making things seamless was essential if Amazon wanted to make Prime Music happen. The new streaming service isn't a standalone app — it's simply baked right into Amazon's existing software. You'll find it in the music section on the Kindle Fire HDX/HD after installing an update, and later today, Amazon Music will replace the Amazon MP3 and Cloud Player apps on Android and iOS, respectively. On the web, it's accessible right from Amazon's homepage.

If you've ever used Prime Instant Video, you'll immediately feel at home the first time you launch Prime Music. Songs and albums that are eligible for free streaming are marked with the familiar "Prime" badge. Amazon says it's got over 1 million songs to start, and plans to add to that catalog early and often. Still, the total is super tiny compared to Spotify's enormous library, which also features exclusives like Led Zeppelin. Amazon can't lay claim to any exclusives. In fact, it's missing the entire, star-studded roster of a major record label, but we'll get to that later. On the plus side, Prime Music supports Amazon's X-ray feature, but it's way different here than on a Kindle. When applied to music, X-ray displays lyrics that automatically scroll and keep in time with the song.

I asked Steve Boom, Amazon's VP of digital music, whether content would rotate in and out of Prime Music — in the same way that movies come and go from Netflix and Prime Instant Video — but he said that music licensing works a bit differently. Generally you won't see albums pull a vanishing act, though in rare instances certain songs may be unavailable; Spotify, Beats Music, and even iTunes (with its "album only" tracks) all face this problem. 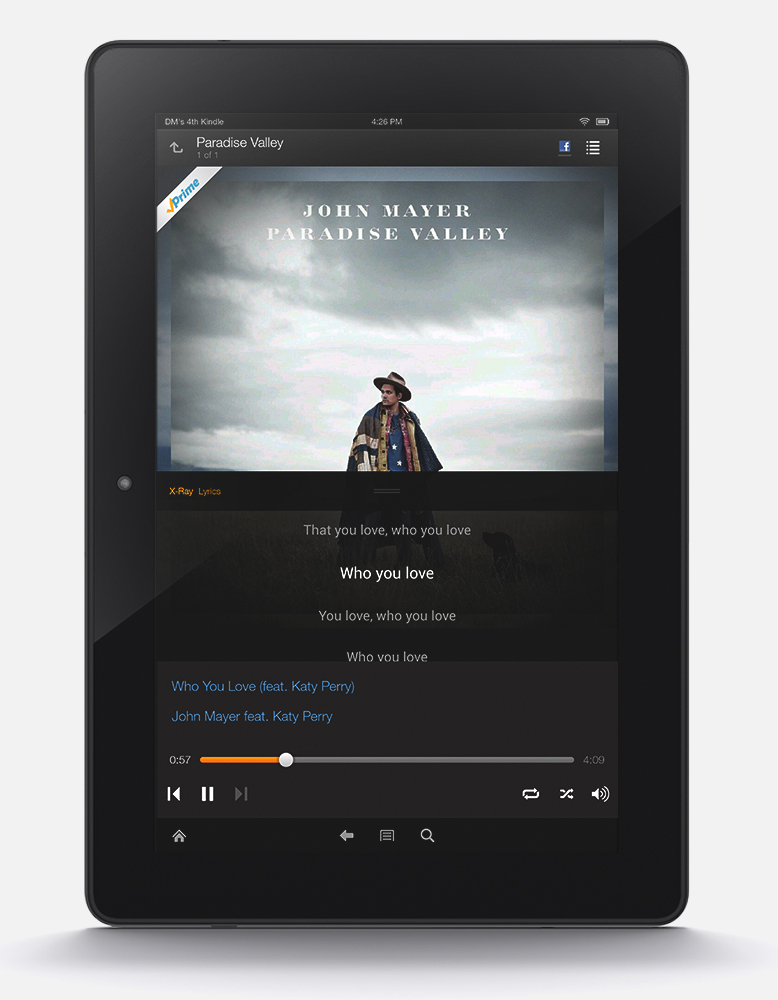 With that in mind, Amazon wants Prime subscribers to treat this music as their own and add it to their libraries without hesitation. Doing so will combine Prime Music with any songs they've purchased or uploaded to the cloud. There are no skip limits or ads here; it's straightforward, on-demand streaming. That also means there's no free "radio" mode anywhere. If you're not a Prime customer, you can't use it, period. And yes, there's offline playback for your mobile devices. (Play Music streams at a variable bitrate by default, but discerning ears can opt to listen only at its "high quality" setting of 256kbps.)

Don't expect today's hits, because you won't find them

Prior to the service's launch, reports claimed that Amazon's streaming service wouldn't be offering current hits. I mentioned this to Boom, and he confirmed that you won't hear the latest releases on Prime Music. His justification was that today's pop often doesn't hold much staying power, and he seemed confident that customers won't complain about the selection they're greeted with. To be clear, you're not exactly restricted to vintage relics here. Albums from 2013 are available, and BuzzFeed has reported that the delay on new releases is six months, though we can't yet say how accurate that window is.

This is Amazon, so you'll of course see personalized recommendations based on your listening habits. These will include items from Prime Music, but also songs that can only be purchased. Amazon and its label partners do like to make money, after all. If you can't stream an album for free, maybe you'll impulsively decide to pay $5.99 for it.

As for playlists, Amazon seems to share in Jimmy Iovine's stance that human participation is essential. The company has recruited a team of music experts to assemble hundreds of playlists, ranging from "best of" compilations to Songza-like collections tailored for a specific mood or personality. Examples include "Beards & Baristas: Indie Beats" and a timely playlist dubbed "Boss, Not Bossy." For the obsessive organizers out there, you'll be glad to hear that artists and songs featured in playlists aren't automatically thrown into your regular library. They'll only appear there if you want them to. Amazon has clearly thought out Prime Music, and I came away pleased after Boom led me through a brief demo. Adding music to your library is effortless, and the new, simplified Amazon Music approach makes total sense.

But there is one problem. And it may be a deal-breaker for a whole lot of people.

No Universal means no Jay-Z or Kanye, and they're not alone

Amazon hasn't yet reached an agreement with Universal Music Group for Prime Music. The New York Times claims the disagreement is over money — no surprise there. Unfortunately, Universal Music Group just so happens to be the largest music company in the world, with artists like Jay-Z, Kanye West, Katy Perry, Lady Gaga, and Taylor Swift on its roster. But those are just a few artists out of hundreds that you won't find on Prime Music at launch.

The omissions are damning and cover everything from hip hop (Ludacris, Frank Ocean) to the music that your parents love (Bon Jovi, Elvis Presley, Stevie Wonder, Tom Petty & The Heartbreakers, and U2). No genre is unaffected and this is a devasting hole in Amazon's streaming catalog that must be fixed, and fast. Making do without exclusives like Zeppelin or The Beatles is one thing, but who's going to take a streaming music service seriously when it's missing dozens of today's top performers? To its credit, Amazon says it's in active discussions with Universal. Jeff Bezos wants to add that content just as badly as you want to see it there.

If you're a Prime customer, it's basically free music

Setting the Universal issue aside, Amazon has managed to come up with a pretty decent offering in Prime Music. Is it enough to be your one and only music solution? I'm not sure. It doesn't meet that bar for me. I've already been lost to Spotify and its massive catalog, and I doubt I'm the only one. But it's believed that at least 20 million people are Prime subscribers, and they all just received a ton of free music — even if it's "only" 1 million songs. That's a huge amount of content, and yet is one of the main strikes against Prime Music at the outset. It's a telling sign of how fiercely competitive the streaming music business has become.

1 million doesn't sound like much, but what if it's just enough?

But with Amazon's influence, it's easy to see Prime Music lapping smaller players like Rdio and Beats Music in no time. And the company doesn't necessarily need to beat Spotify at its own game. The goal is to draw in new Prime customers, and Boom suggested that there's room for several players in this race. Prime Music is in a unique position to become your other music app. Maybe you're a loyal Pandora listener with a Prime subscription; you've just gained a way to listen to countless songs on demand.

In other words, Amazon has quietly come up with a brilliant plan to lure people away from ad-supported music "radio" and fledgling streaming apps, all while making it feel as though Prime Music costs nothing extra. For many of us, Prime's $99 annual fee is a downright necessity. Starting today, we're getting even more for that money. Just add Universal and it may prove good enough for many people. "Good enough" is what Spotify should be afraid of. And just think of how nice this will be on a phone.

Correction: The article originally stated that Prime Music offers no music from Snoop Dogg and The Eagles. In fact the service does feature select albums from both artists. Tom Petty's solo work can also be streamed, though not his work with The Heartbreakers.