Skype 5.0 brings a taste of Windows Phone to iOS

Microsoft's app works even better on an iPhone

Share All sharing options for: Skype 5.0 brings a taste of Windows Phone to iOS

Microsoft announced a big refresh to its Skype for iPhone app earlier this week, and it’s now starting to roll out to handsets. While there’s a new focus on group chats within the app, the most notable changes are visible as soon as you start using Skype 5.0 as it all looks a lot like Windows Phone. Previous versions of Skype for iPhone have kept largely inline with the look and feel of iOS apps, but Skype 5.0 is identical to its Windows Phone equivalent. There’s panning to reach people, recent, and favorites sections, and the chat and phone icons replace the old section buttons at the bottom of the app.

The most surprising addition is the use of the three dots menu that Microsoft includes in its Metro-style applications to note there are extra options. With all these new user interface changes in place, Microsoft’s Skype iOS app appears to have leapfrogged the Windows Phone version. Subtle animations, smooth scrolling, and a parallax effect all add up to an iPhone Skype experience that feels superior to its Windows Phone equivalent, despite looking identical. Windows Phone users have persistently requested a better Skype experience for a platform Microsoft calls its own, and these latest changes might provide hope for an improved Windows Phone app that’s features and design are aligned with iOS. 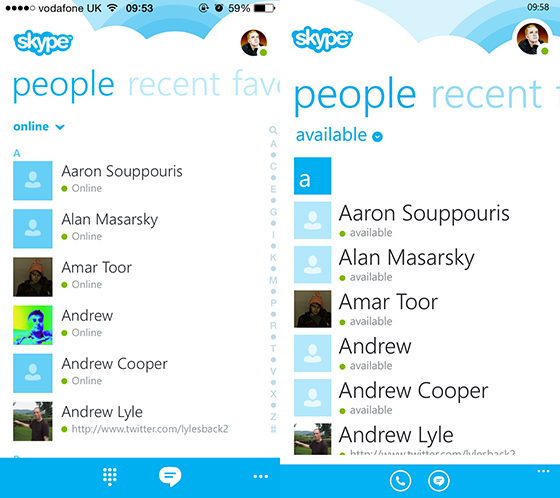 Alongside the design changes, Microsoft is tweaking its messaging and group chat options. Picture messaging was always hidden away in a confusing drop down option, but it’s now front-and-center thanks to a new attachment icon in the message input area. You can add photos or video messages, and both are displayed inline within a chat thread. Overall Skype still feels like an app that’s primary function is video and voice calling, but it’s clear Microsoft is trying to strike a balance to pick up on the popularity of apps like Snapchat or WhatsApp. The changes aren’t drastic enough yet, but right now it’s subtle changes to keep the app familiar for its millions of users.

Skype 5.0 for iPhone should be rolling out over the coming days to handsets, but if you’re not seeing the update yet there’s a trick to get it a little earlier. Simply delete the existing app and then open the App Store and navigate to the purchased section of updates. If you pull down and search for Skype then you should see the new 5.0 version.