Facebook to show ads based on your browsing history, but let you change them

Share All sharing options for: Facebook to show ads based on your browsing history, but let you change them

The change means that a user browsing websites for a new TV may lead to TV ads being displayed within Facebook. It’s an interest-based form of advertising that’s used widely on the web, but Facebook has previously only ever used the tracking data for security reasons. The changes, which roll out to US Facebook users in a few weeks and to other users in a few months, mean consumers will need to opt-out with the Digital Advertising Alliance to prevent their browsing habits outside of the site from being used to help deliver custom Facebook ads.

While the move may raise privacy concerns, Facebook is also giving users more control over the targeted ads that it shows them by adding a new drop-down menu to each ad. If you’re not interested in a particular subject, then you can remove that from your ad interests to make sure you never see a similar ad again. Clearly, Facebook is trying to walk a fine line that satisfies both its bottom line and users concerned about privacy, but whether it succeeds at either remains to be seen. 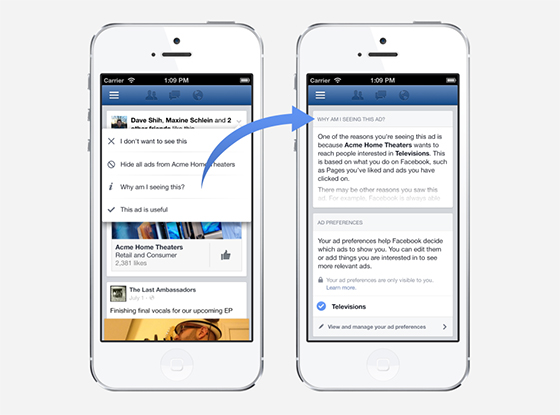 Correction: This article originally stated that Facebook would be sharing users' browser histories with advertisers. In fact, Facebook will act as intermediary and deliver the targeted ads from advertiser to user. It won't share an individual user's web-browsing information with advertisers.