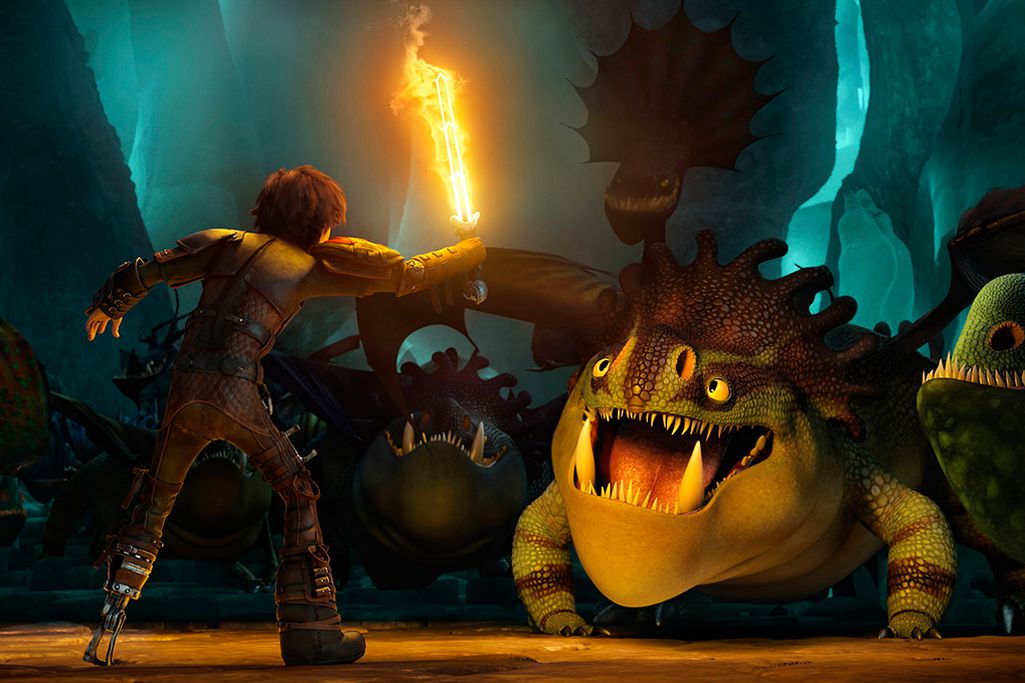 With franchises like Shrek, Kung Fu Panda, and Madagascar to its name, DreamWorks Animation has spent the last 20 years building an animation mini-empire. The studio’s movies have pulled in over $11.5 billion in global box office, and, despite some recent underperformers, it’s continued to diversify with pushes into TV, apps, and online initiatives. This weekend the studio is heading back to movie theaters with the release of How To Train Your Dragon 2.

Written and directed by Dean DeBlois (Lilo & Stitch, the original How To Train Your Dragon) the movie is one of DreamWorks’ most visually stunning films to date. Dragons swarm in epic battle sequences; humans gracefully race, flip, and fly; and key dramatic moments are powered solely by the visual nuance of a computer-generated character’s performance. It’s a leap in terms of both spectacle and emotion, and at the heart of it was a new version of the studio’s flagship animation software — one that’s letting DreamWorks animators do more than they ever could before. 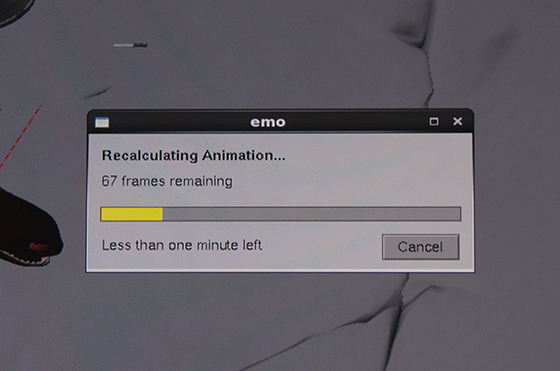 The older software was showing its age

Throughout the studio’s history, it’s relied on a custom piece of animation software named Emo. Originally developed in the 1980s by Pacific Data Images, Emo was designed to animate primitive graphics and text, but evolved into the kind of tool that could bring Princess Fiona and Puss in Boots to life. Despite several major overhauls, however, it had begun to show its age. Animators would have to work with rough geometric approximations of creatures rather than fully-realized models, or turn off different body parts altogether to get the software to run at an acceptable speed. Then there was rendering, which would tie up the workstation completely.

Like a lagging version of Photoshop, Emo simply wasn’t using modern hardware to its full potential. So five years ago, the studio met with its hardware partners HP and Intel to get a sense of where their respective products would be going in the years ahead. Realizing that a simple update wasn't going to get the job done, DreamWorks decided to rebuild its entire suite of production software from the ground up. 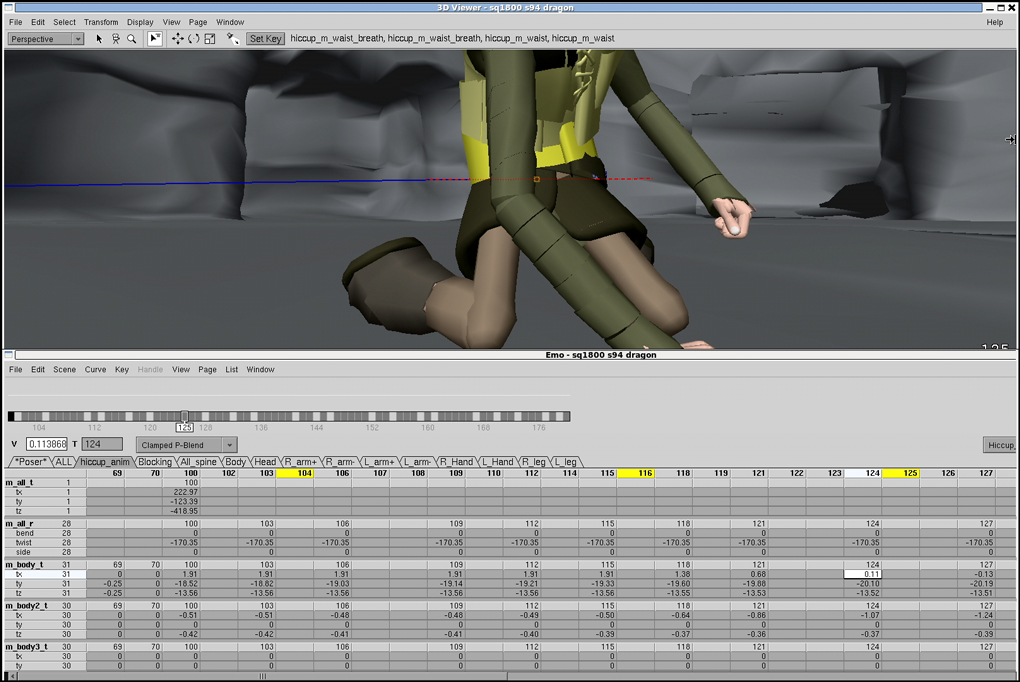 The Emo working environment in a scene from the original 'How To Train Your Dragon.'

DreamWorks CTO Lincoln Wallen went to the company’s artists, asking them to daydream what kind of tools they would like to use in a perfect world. "I recall it very well," Simon Otto, head of character animation for Dragon 2, tells me in a suite at the studio’s Glendale headquarters. "One of the first things was, "[What] if you just forget everything you’re doing today?" People with backgrounds in all different types of animation were consulted — from 2D animation, to stop-motion, to video games — in an effort to create a software solution that could bring together the best of all possible worlds. "We created a big list of why certain mediums have advantages over others," he says. That list provided big-picture guidance for the software team as it began building and iterating on a new animation tool for DreamWorks — and the end result is named Premo.

The differences between the two programs are obvious at first glance. Rather than forcing animators to deal with rough approximations or partial versions of characters, Premo allows them to work with the fully realized and skinned characters, which they can interact with and modify in real time. Camera positions can be moved on the fly to get a better vantage point of a particular movement, and thanks to robust support for the latest multi-core processors there’s enough power to put as many different characters in a shot as the director wants (some of the sequences in Dragon 2 feature dozens of different dragons flying around simultaneously). Rendering is still a requirement, of course, but Premo does it all in the background without tieing the app up and preventing additional work. Otto showed me a demo of the software on a machine with 16 cores — quadrupling what you’d find in the base-level Mac Pro — and the moment he tweaked a character’s position the sequence re-rendered seamlessly without even the mildest hiccup. 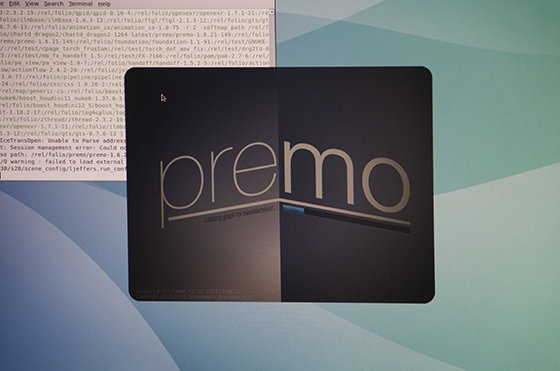 After 5 years of development the result is Premo 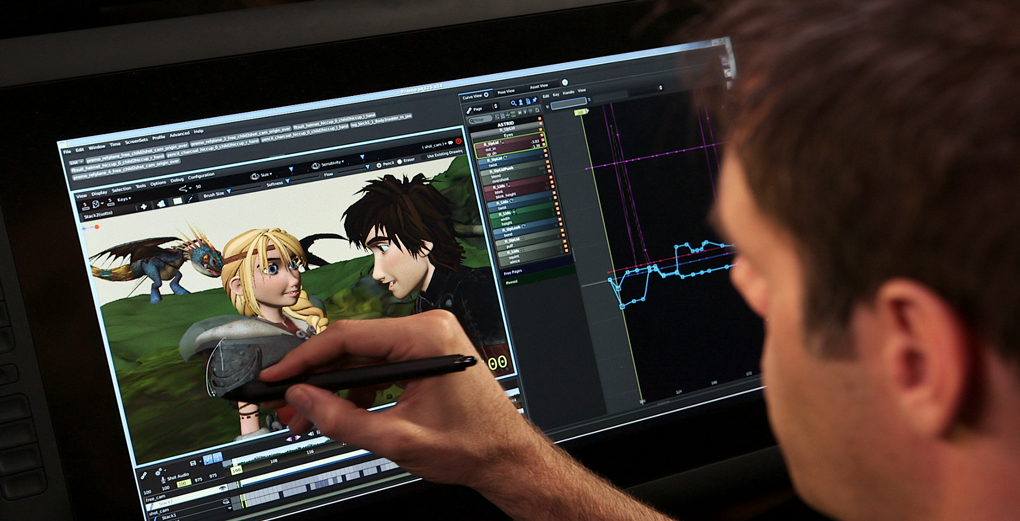 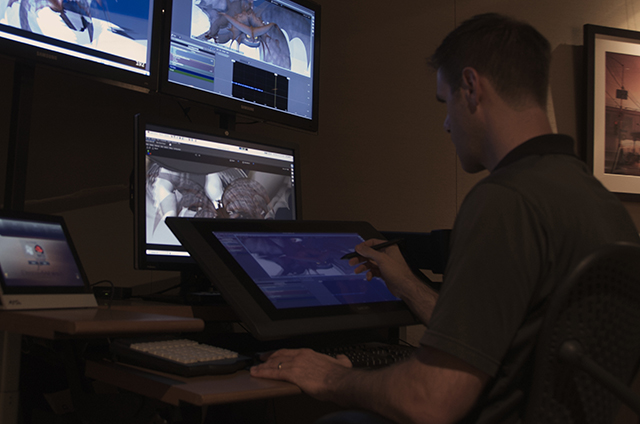 A more natural way to animate

But while the raw power is nice, that alone doesn’t change the way artists actually interact with the software. To give you an idea of how computer animation usually works, once a character’s design is locked in it gets handed off to a different department that "rigs" the model. That process essentially consists of creating the joints, limbs, and various points of articulation that the artists will later move around to pose the figure. (Imagine an old-school GI Joe action figure, but with 1,500 to 2,000 different moveable parts.) In Emo, animators used their mouse to move those pieces around, or edited the positions manually using a massive spreadsheet-like database. It was functional, but clunky to say the least.

With Premo, DreamWorks provided animators with large, pressure-sensitive screens from Wacom. Using the tip of their pen, they can interact directly with the CG character — with the skin, muscles, and other elements responding in real time — resulting in an experience that’s closer to posing a physical model than it is to mind-numbing data entry. According to Otto, it’s a more immediate, naturalistic way of working that allows for more experimentation — but more importantly, lets the artists bake more nuance into the final product. 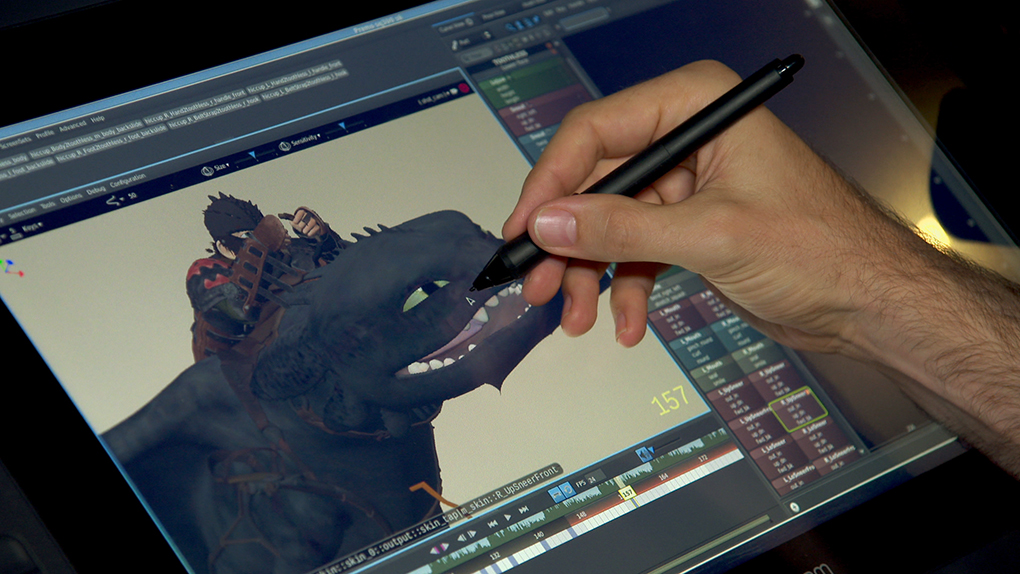 An animator poses the face of Toothless in 'How To Train Your Dragon 2.'

How To Train Your Dragon 2 was the first DreamWorks film to use the studio's upgraded software suite — collectively known as Apollo — and animators point to several examples where Premo’s influence shines through. A scene in which the character of Stoick (voiced by Gerard Butler) confronts a woman from his past plays out largely through the character’s facial expressions alone. It’s a powerful piece of performance, and watching the conflicting emotions battle on his face is simply remarkable. There’s also a sweet moment where the dragon Toothless casts a longing glance back at his owner, Hiccup (Jay Baruchel). That moment didn’t exist in the original storyboards, and if using the older software the animator would have needed to turn off everyone but the single character they were working on. With Premo, however, they could keep everything turned on — and like an actor improvising in the moment, the animator saw the opportunity for an added interaction that makes the film better.

Despite all the advances, Otto is already looking past the immediate horizon, to when the studio’s tools can put even more control in the hands of the animator. "I still want to go to the final lighting of the movie," he says. Today, a given shot is first animated by an artist, and then shipped off to the lighting department where the virtual cinematography is put into place. A future version of Premo could conceivably swap that around, he says, allowing animators to move their characters around a fully-lit environment — though it would require a complete reimagining of the computer animation workflow. "Now that’s a long way," he smiles, "because that’s really challenging."

How To Train Your Dragon 2 opens Friday, June 13th. All images courtesy of DreamWorks Animation.