For a long time, Samsung’s been trying to take down the iPad. Since 2010, the company has released a seemingly endless line of tablets aimed at taking away market share from Apple. Some have been so similar to Apple’s products that they became the center of Apple’s infamous trademark lawsuit against Samsung. But the effort has paid off to some degree — Samsung reported shipping 40 million tablets last year, far more than it had in prior years. It’s still behind the 70 million iPads Apple moved, however.

Now Samsung’s announcing its newest tablet line, the Galaxy Tab S, available in 8.4-inch and 10.5-inch sizes. The Galaxy Tab S models are thinner, lighter, and faster than earlier efforts, and they have new Super AMOLED displays that Samsung says easily outperform their LCD-equipped counterparts. But one major thing remains the same: Samsung is very much still trying to beat the iPad.

The $399 (8.4-inch) and $499 (10.5-inch) tablets are priced squarely against Apple’s iPad mini with Retina display and iPad Air. They are incredibly thin at just 6.6 mm thick, and they match the iPads for weight (the 8.4 is a few grams lighter than the iPad mini, but the difference is negligible in practice). Holding either tablet in one hand isn’t a chore, and I could actually see myself using the 10.5-inch model for reading. The base models have 16GB of internal storage (with support for microSD cards up to 128GB in capacity) and Wi-Fi connectivity, though LTE-equipped and larger capacity models will be available later this year.

The new screens are fantastic

Samsung’s big selling point with the Tab S line are the new Super AMOLED displays, and well, they look pretty fantastic. The Tab S line has the largest Super AMOLED displays Samsung has ever used in a mobile device, and they are the first tablets since 2012’s Galaxy Tab 7.7 to use the technology. Samsung boasts that the 2560 x 1600 pixel AMOLED screens offer 20 percent better color range and 100 times better contrast ratio than comparable LCDs. In person, they are very bright and very vibrant, though they still exhibit the over-saturated look anyone that’s used a Galaxy S smartphone can relate to. Samsung is including some software tools to tweak colors and brightness, which help make the displays easier to look at while reading. But really, Samsung designed these for watching video, and for that they look great.

This year, Samsung is putting a huge effort into convincing everyone that it cares about design, and the Tab S models carry the same "Modern Flash" design theme as the Galaxy S5. Samsung tells me that its designers were inspired by minimalist architecture when building the tablets and the goal is to attain "ultra sleekness and slimness." In reality, they just look like giant Galaxy S5s, complete with the same dimpled finish on the back and fingerprint scanners on the front. They are well made and don’t feel like they’re going to fall apart in your hands, but they don’t feel nearly as premium as the iPads they are trying to take down. Both sizes will be available in "Dazzling White" and "Titanium Bronze". The white looks better, but neither color looks hugely different from the six other tablets Samsung has released this year.

The Tab S models run Android 4.4 KitKat with Samsung’s familiar custom interface on top. They support the company’s dual-screen multitasking, though it's limited to just two windows here, as opposed to the four windows on the Tab Pro line. Samsung is launching a new electronic magazine service called Papergarden with the Tab S, which features interactive articles and magazines from top publishers such as Condé Nast. Finally, the Tab S debuts Samsung’s new SideSync 3.0 service, which lets you make and receive phone calls on the Tab S through a Galaxy S5 paired over Wi-Fi direct. Once paired, the S5’s screen is mirrored in a window on the Tab S’ display, and you can access all of the phone’s apps and features without ever touching it. It’s also possible to drag and drop files and media to and from the S5’s window. 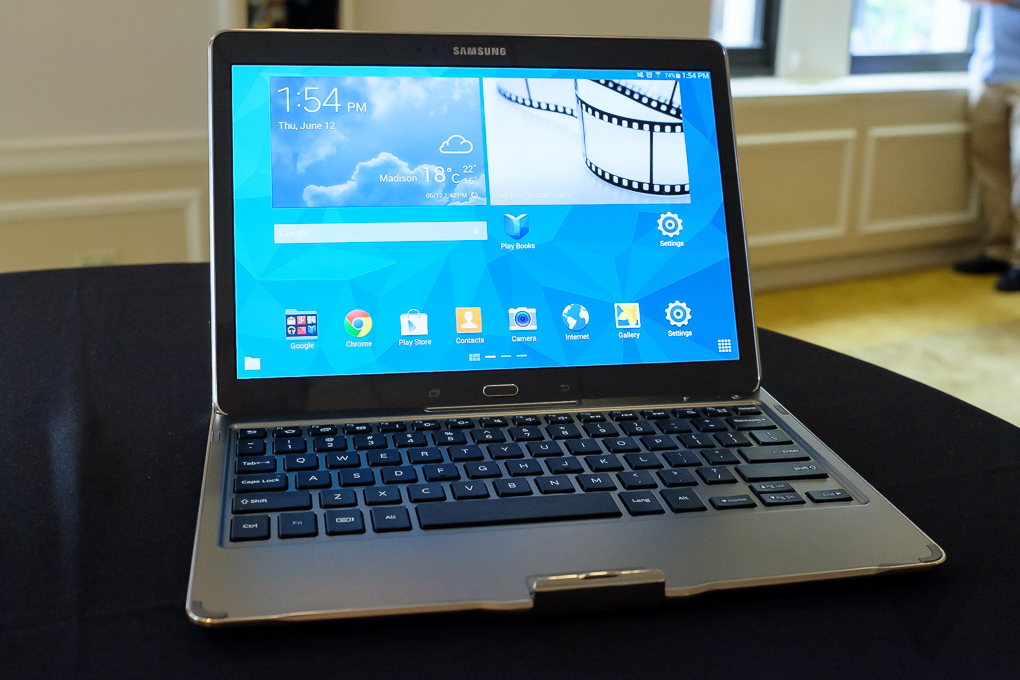 For accessories, Samsung is offering a folding Book Cover and a basic Simple Cover, each available in a variety of colors. The covers snap to the back of the tablets through a unique grommet system, as opposed to the more common magnetic attachment used by other case makers. The grommets can be quite tight and make it hard to easily remove or attach the cases, but they aren’t going to fall off accidentally either. The folding Book Cover can support the tablets in three different angles, but its folding system is much more convoluted than other tablet cases that do similar things. Samsung is also selling a Bluetooth keyboard case for the 10.5-inch Tab S, which turns the tablet into a smallish netbook or laptop.

Samsung has long been criticized for selling too many variations of the same basic products, and this year is no different. Between the Galaxy Tab 4 line, Galaxy TabPro and NotePro lines, the Galaxy Tab S line and other random tablets, Samsung has released at least nine tablets in just the first six months of this year, many of which have overlapping features and designs. Samsung says the Tab S line is its new flagship tablet product, but it doesn’t plan to get rid of the Pro line or the Tab 4 anytime soon.

Samsung has already released at least nine tablets this year

The Tab S models, which will be available online and in stores in July, are impressively thin and light and have fantastic displays. But for the most part, they are still following Apple’s lead, without doing anything hugely different or interesting. Combined with the still-weak Android tablet app ecosystem, it’s hard to see the Tab S pushing Samsung ahead of the iPad anytime soon. But if it doesn’t, you can bet that Samsung will be ready to try again with yet another line of tablets in the near future.