Share All sharing options for: Spit here: can Cue's $199 lab-in-a-box keep you healthy?

Technology has added plenty of new annoyances to life, but it's also done away with countless others. One more that could be on its way out? A visit to the doctor's office. That's the vision of a company called Cue, which wants to make at-home medical diagnosis — everything from the flu to vitamin D levels — as common as pregnancy tests.

The concept revolves around a small cubic kit, which the company says can use a swab of saliva, nasal fluid, or blood, to discern what's going on in your body. And the product won't just determine if you're sick: it'll also check vitamin or testosterone levels, or help women figure out if it's a good time to try for a baby. In short, Cue is designed to replace the trips you'd take to a doctor or lab by doing some of those same tests at home.

Cue, which hopes to ship its first $199 device to a group of beta testers early next year, is the brainchild of Ayub Khattak — who has a background in mathematics and biochemistry, and Clint Sever, a product designer and engineer. Five years ago, Khattak was working on a project about genetic barcoding in plants at UCLA, and thought that the same idea could be applied to a miniaturized tester for viruses in humans. The pair decided to take apart a home glucose tester and figure out whether that same basic hardware could extend to other types of tests. That led to the small base-unit reader, which can analyze disposable cartridges that test different bodily fluids. You put a fluid into a cartridge, plug it in, and the Cue base unit delivers test results wirelessly over Bluetooth to an app on your phone.

The flu is one of five things Cue plans to assess in its initial model, alongside fertility, testosterone, inflammation, and vitamin D levels. Some of those tests differ from what you'd find in your pharmacy, which typically offer blood-glucose monitors, home drug-testing kits, fertility tests, and kits that check for HIV (which until two years ago required lab work). By comparison, several of the tests Cue's going after have traditionally required a doctor's visit or a trip to a specialty lab.

Cue's starting lineup of tests are "similar in performance" to their lab counterparts, Khattak says, and in some cases are faster than what's being used in doctor's offices. The flu test, for instance, is three times faster than a conventional one, and the Vitamin D test takes 10 minutes to spit out results.

140 million US doctor visits are for cold and flu

"There are over 140 million doctor visits for cold and flu symptoms every year in the US. In more than 31 million of those visits, the patient has flu," Khattak says. "We want to enable people to get this health information in minutes and, if flu is detected, communicate their result to their doctor who can order a prescription to the local pharmacy."

And because Cue relies on a universal reader to analyze cartridges, it could conceivably be expanded to incorporate additional tests in the future. Cartridges, which are non-reusable, are mostly expected to sell for $20 per five-pack, with the flu test going for $30 for a pack of three. Khattak says the eventual goal is to have both the unit and cartridges subsidized by insurance companies and government health-care programs like Medicare. Right now, Cue is being sold to select buyers without FDA approval, by participating in an agency program that allows exemptions for "investigational devices" — meaning the product can't yet be sold in stores. 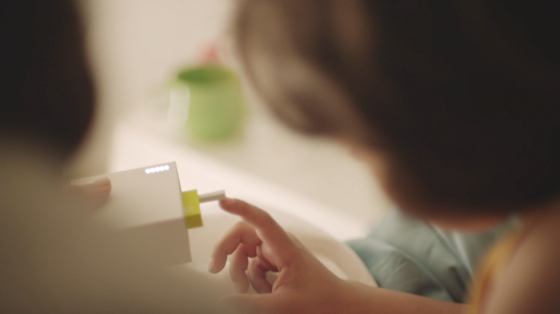 Of course, Cue isn't the first company trying to transform how and where medical testing happens — though it is among the first to focus on consumers instead of health-care providers.  QuantuMDx, which is backed by the Bill & Melinda Gates Foundation and the Clinton Foundation, has developed a portable device that can detect malaria, HIV, tuberculosis, or other STDs in less than 15 minutes using similarly specialized cartridges. Unlike Cue, however, it's been developed for testing in places without Westernized medicine, and plans to eventually test for things like cancer.

Apple and Samsung want to track health data too

Cue's entry also comes as technology giants like Apple and Samsung are turning attention to health-tracking and its integration with sensor hardware. For Samsung, that's a two-pronged effort to track metrics like heartbeat, blood pressure, and physical activity. The company is also working in SAMI, a cloud-based platform for securely capturing and processing data from all various health-tracking hardware. More recently, Apple announced HealthKit, a backend for tracking fitness data which will work hand-in-hand with a health-tracking app on iOS. HealthKit is expected to be an integral part of the company's wearable device, which is reportedly being announced this October.

But not everyone is convinced by the idea of home health-testing devices like Cue. Especially the part about turning the data into something that's actionable. "A small machine is not going to tell you what it means," says Dr. Paul Abramson, a San Francisco physician. "Say these numbers were accurate. Would they be useful to figure out what to do? Probably not, because it's hard to be objective about yourself when you're sick."

And because Cue has yet to be used by many patients, it's unclear exactly how accurate the device actually is — and the company isn't ready to discuss that, largely because it can't make any claims to accuracy until the product is cleared by the FDA. All Khattak would say is that Cue was "definitely not less effective" than standard lab tests, and that the company's been comparing its own results to those done in a lab.

Even so, Abramson suggests that some of the things Cue plans to test for don't yield simple answers, and could require analysis. "Self-testing at home implies there's a linear [progression]: this means this. That if you just measure it, it will tell you what to do — and very few things like that are true in medicine," he says. "There's a lot of gray area." That includes testosterone testing, something Abramson argues was created by pharmaceutical companies, and is difficult to analyze because it can differ among patients and vary wildly from day to day.

Looking ahead, Cue's founders also hope they can offer some analysis to go along with test results. The company plans to offer suggestions, like exercise tweaks or dietary adjustments, based on a user's health profile. What's less clear about that plan is what happens when you actually have the flu, or something else that's picked up in future tests. Will doctors be on-board with offering prescriptions even if they don't see a patient in the exam room? If the tests end up being good enough, Khattak believes that's the clear next step. "We're not inventing something new about how things are detected," he says, "we've just packaged it in a way that's very efficient."