As I write this, there are VR tracking systems for most of your extremities. Stompz are little foot cuffs with sensors. PrioVR is a harness that fits around your wrists and elbows. Both are designed to work with headsets like the Oculus Rift, which many see as the current linchpin of virtual reality. But alongside these are companies whose work wasn’t conceived with the Rift in mind, focused on bringing your body into a virtual world. Some are new. Some have been here all along. And some are right here at E3, right next to the latest big-budget games that they want you to be able to touch as well as see.

Control VR is an older and, its founders claim, wiser project than something like PrioVR. Though it’s raising money on Kickstarter, it grew out of Synertial (formerly Animazoo), a 20-year-old motion-capture glove and body suit company whose clients include Hyundai, Ubisoft, and Raytheon. With the Rift’s popularity came new chances for a consumer version. Control VR’s system is a pair of soft open-tipped gloves connected by elbow sensors and a plastic shoulder yoke. "This’d be great for Iron Man," said one user, pointing at the glowing round symbol resting below his clavicle. 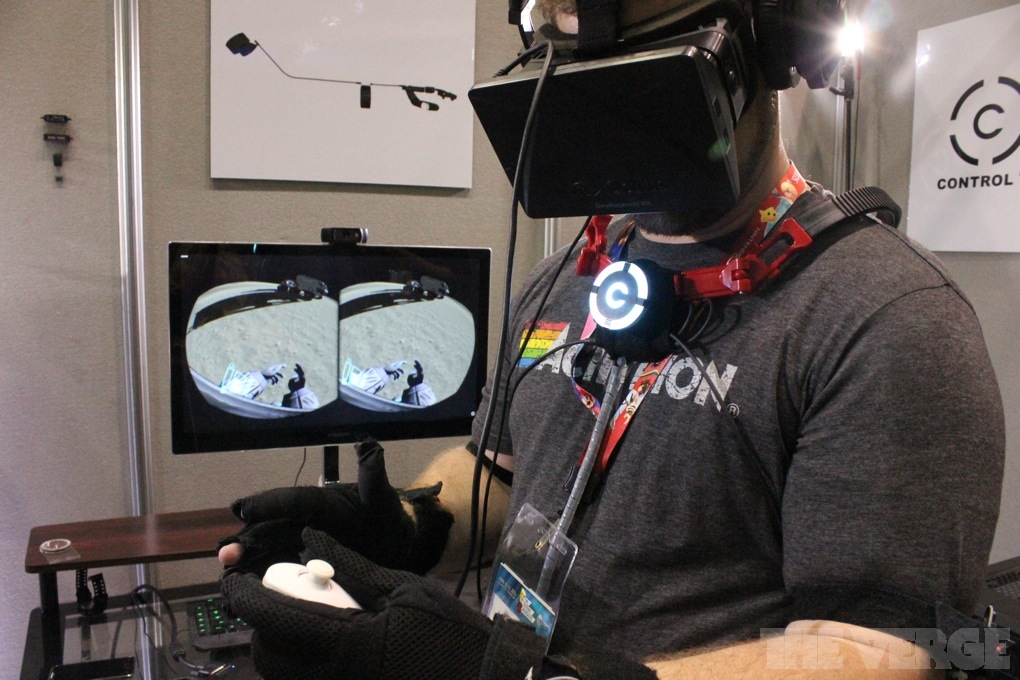 Fine-grained finger control is what sets Control VR apart from more general motion harnesses or Kinect-style controllers, putting it in the vein of ’90s "datagloves" (yes, like the Power Glove). When you enter the body of an astronaut in the E3 demo, you can stretch your hands in front of you and see them move with little lag, or make a fist and watch your virtual fingers curl tight. You can use the forefinger of one hand to tap a button on the other side of your spacesuit. You can get similar effects with the Leap Motion, but it can’t match the accuracy or ease of motion. That said, they hadn’t had time to put some obvious, interesting elements into the demo: you can’t, for example, pick up the American flag on the Moon or clasp hands with another astronaut. I also had a more interesting problem: the magnet implant in my hand threw off the sensors, leaving my ring finger perpetually stretched backwards.

A subwoofer on your sternum

There are also technological advances that the team is only beginning to tackle. Much more sensitive tracking, for example, would be possible by combining the glove with a Kinect-like camera system. And haptic feedback, delivered through the glove, is the next big frontier — and something that purely camera-based tools couldn’t deliver. Either of these elements would build on the current sight-only standard, though nobody is quite sure how vital they are.

While haptics are still in the future for Control VR, other companies have gone straight for trying to further the illusion of presence with vests, gloves, and more. But how do you trick people into feeling something that’s not there? The KOR-FX Haptic Gaming Vest, also currently on Kickstarter, is one potential solution — but it’s one that will need a lot of work.

The thick black KOR-FX vest fits neatly over your shoulders, and it’s designed with a wide range of applications, not specifically headset VR, in mind. Connect a dongle to an audio jack, and it transmits the sound from anything you’re playing — movie, game, music — to a pair of adjustable transducers near the top of your sternum, creating a subwoofer-like vibration in proportion to its strength. Creator Shahriar Afshar compares it to the feeling you get when you put your fingers to your chest and speak. And you really can feel everything, in the way you might feel a speaker at a party. Someone booted up Counter-Strike for me, and the wind started humming in my chest before the game had even started. When fellow counter-terrorists ran, their footsteps resonated. The sensation tickled.

Afshar has hit on a clever hack for simple vibrational feedback. Unfortunately, it’s not a very good one for shooters. Being able to feel everything meant that actual bullets barely registered, making it useless as a signal. What it could do was make my heart feel like it was pounding. It was a surprisingly effective simulation of genuine fear.

At the other pole of haptic feedback is SimCraft: a heavy black chassis with a steering wheel and three giant monitors, suspended in a frame that can rock, tip, and shake it. At the booth for the second year in a row, it let players run laps in racing game The Crew with the force of an amusement park ride. On punishing curves, it could throw you around when you spun out. On straightaways, the steering wheel shook as you accelerated, turning what could have been one of the least involved sections of the course into something gripping.

What exactly counts as immersion?

Unlike devices like the Omni Virtuix Treadmill, none of these projects grew directly out of the Oculus Rift VR boom, but they’ve all likely benefited from it. As the idea of virtual reality becomes more plausible, we’ve taken a fresh look at them, raising questions of what exactly we should count as immersion and presence. In our current world, VR means goggles. But one of the more successful ’90s applications was an arcade version of MechWarrior, set in enclosed "pods" with screens simulating a live feed of a battlefield. SimCraft isn’t quite there, but it’s the same principle, and the manager mentioned the franchise as one he’d like to work with.

Virtual reality is, rightly, often focused on sight alone, but it’s time to figure out what element our bodies should play. How important is the sense of touch? Of physical control? Sight tells us what the world is, but touch and motion is what gives us an intimate connection to it. And until we get that connection, we’ll never really know what it’s like to be disemboweled by a xenomorph.