David OReilly's new game is "like a little, beautiful window to another little universe"

The man behind the futuristic video game played in the science fiction movie Her is releasing a "relax 'em up" called Mountain. At the Horizon game conference yesterday, creator David OReilly explained that players are first prompted to draw pictures based on "very open-ended" questions. The results are then collated and used by the game's code to create a unique mountain. Data culled from the images also influences variables like the shape of the terrain, snowfall levels, and the type and quantity of vegetation that will appear. 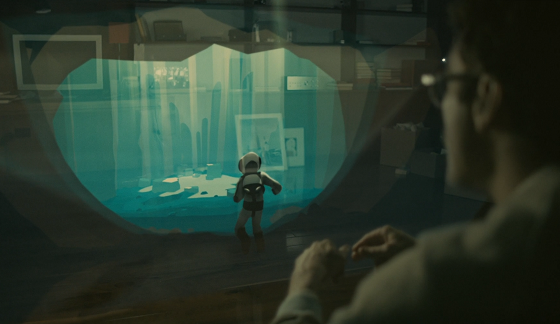 A glimpse of OReilly's video game in Her

The game will feature a day-night cycle, seasons, and a dynamic weather system that includes rain and fog. "All of this interacts with what grows and dies on the mountain, and it all interacts with itself, " said OReilly. He goes on to talk about the upcoming mountain simulator's camera controls and the ability to use music to accelerate time. While every playthrough is supposed to be different, OReilly noted that there will be about "50 hours of gameplay," and an actual ending. Mountain will cost roughly a dollar and is slated for release on June 21st for iOS, PC, and Mac.