Comcast wants its logo at the top of 30 Rock

Share All sharing options for: Comcast wants its logo at the top of 30 Rock

Comcast owns New York City's famous 30 Rockefeller Plaza, and now it wants everyone in the city to have a permanent reminder of that. The company has put forward a proposal to remove the "GE" initials that have stood atop the landmark building since the 1980s. They would be replaced with Comcast's own logo — NBC peacock in tow. According to The New York Times, a local community board has already given the green light for the switch, but that's not the only approval Comcast needs. Before it can put its own stamp on New York's skyline, Comcast must first obtain a "certificate of appropriateness" from the city's Landmarks Preservation Commission. 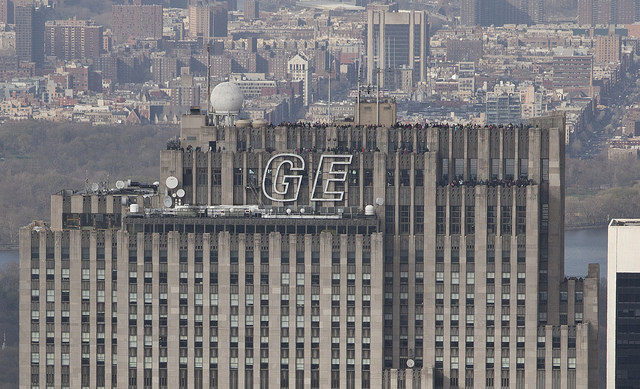 GE's initials at the top of 30 Rockefeller Plaza. (Anthony Quintano)

If things proceed, the corporate giant's name and logo would be emblazoned on the building's north and south sides, with a larger peacock showcased on the western end. The Times notes that Comcast's renovations would in fact be "slightly more compact" than the current GE signs in terms of total square footage. But that's not stopping some local historians from crying foul. Many of them view the roof of 30 Rockefeller Plaza as sacred ground: before GE's initials went up in 1988, RCA had clung to the prized spot for over 50 years.

But with Comcast's growing influence and stature, it was probably only a matter of time before the peacock made its way to the top of the rock. The proposal also calls for a brand new entrance and marquee intended to promote The Tonight Show, which returned to New York under new host Jimmy Fallon.