Davide Vannoni is playing with people's lives, and the Italian government is paying for it

A three-year-old Italian boy who suffers from a rare and incurable degenerative disorder called Krabbe disease received a stem cell injection last Saturday. It was his sixth dose, and according to the person who developed the treatment, Davide Vannoni, the boy has obtained "very good results." Under normal circumstances, any claims of improvement in this boy's ability to move around and develop mentally would be more than welcome. But Vannoni's assertions — that his stem cell injections can reverse the effects of any number of fatal diseases — aren't supported by peer-reviewed studies or clinical trials. And he isn't backed by a drug company or a university either.

In fact, outside of his small circle of associates, he has received very little support from the scientific community. Yet his organization, a nonprofit called the Stamina Foundation, has treated more than 100 patients since 2007 — and at least 14 of those treatments were paid for by the Italian government.

"This makes no sense."

"They claim that they are able to isolate mesenchymal stem cells from the bone marrow of patients simply by using a drill," says Elena Cattaneo, a pharmacologist and the director of UniStem, the University of Milan's Centre for Stem Cell Research. "And then they have been claiming that they're able to transform these mesenchymal stem cells in 20 minutes into neural stem cells," to restore a person's neural functioning. This is impossible, she says, adding "I spent my life generating neurons from stem cells. All this makes no sense."

Cattaneo and bioethicist Gilberto Corbellini published an article in Nature today in which they describe their ongoing fight to stop the Stamina Foundation from treating patients. The foundation claims that they "can treat conditions as diverse as Parkinson's disease, muscular dystrophy and spinal muscular atrophy," the researchers write. But Vannoni, "has not published in the peer-reviewed literature," and he refuses to share his methods with the scientific community. "This is a person who has no understanding of what science is about," Cattaneo says. "He is not a scientist." 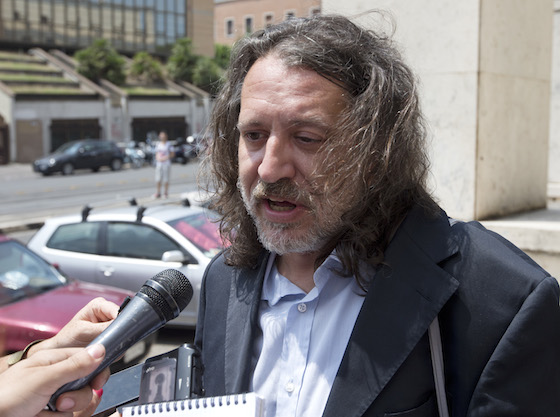 Before becoming a controversial Italian figure, Davide Vannoni was a psychology professor at the University of Udine, in northeastern Italy. As an academic, he wrote a book — a manual on persuasive communication — but published little else. So it was purely by chance that he entered the world of stem cell research.

Vannoni wrote a manual on persuasion

"I developed partial facial paralysis in 2001," Vannoni says, and "I went to every kind of hospital and center for four years," but conventional treatments didn't work. He then traveled to Ukraine to receive stem cell injections that were being dispensed by two Russian scientists. "In Ukraine, I met with different patients — someone with Parkinson's and someone with an autoimmune disease — and also I become friends with the researchers and with my contacts with the regional government." Eventually, he says, "I proposed to finance a lab and take these two Russians to Italy."

By 2007, the Stamina Foundation was treating patients. To recruit them, Vannoni and his team dispensed flyers in hospitals that claimed that they had treated over a thousand people, and that most patients had experienced a 70 percent to 100 percent recovery. Soon they were under investigation by the local police for treating patients with illegal stem cell preparations. Yet, the foundation still managed to fly under the radar until 2011, when they convinced doctors at a public hospital in Brescia to dispense the treatment. "When they were in the basement, they were being investigated by the police," Cattaneo says. "But when they started doing their stuff in a public hospital, any citizen would think it was a good thing." And because the treatments were given in the hospital, Italy's national health services was footing the bill.

each injection cost the government over $60,000

It's unclear how many patients have received Vannoni's "Stamina method" since 2007. Vannoni told me he has treated more than 100 patients "with different diseases and they have had very good results." Some of these treatments were performed outside of the hospital, and many patients paid for it themselves. But according to Science, each hospital-sanctioned injection cost the government over $60,000. And storing the cells for a year cost an additional $13,000. The physicians in Brescia justified their actions by saying that "they didn't know what we were injecting," Cattaneo says, "but that's crazy because it's part of your ethical duty to know what you are doing to your patients."

In May 2012, the Italian government shut down Vannoni's operations. But some patients took the case to court and Vannoni was able to resume his activities in March 2013 with 32 terminally ill patients, most of whom are children. Moreover, because numerous politicians expressed their support for the Stamina Foundation, Vannoni's credibility increased. And in May 2013, the government agreed to fund a $3.9 million clinical trial for the Stamina Method, although plans for the trial have since been halted.

"These treatments are dangerous."

According to Cattaneo, the technique is ineffective and carries many risks. But without a clinical trial, it's hard to know what effect the Stamina method might be having on Vannoni's patients. Some have reported improvements, whereas others have reported fevers and seizures following the injections. Regardless, Cattaneo says, there is little doubt that "these treatments are dangerous."

As public opinion of Vannoni in Italy has become more polarized — the media portrays him as both a fraud and a hero — scientists have banded together. They spoke to politicians and prepared dossiers. They wrote letters to patients and gave numerous interviews. "We have each sacrificed 60-80 weeks of lab time so far and have delayed submitting papers," the researchers write in the Nature article. But "by early 2013, those of us objecting to Stamina were being vilified by Vannoni and by some media outlets as keeping children from life-saving treatments."

"he copy-pasted from Wikipedia and other papers."

Despite the backlash, many of their efforts bore fruit. In October 2013, a committee of experts convened by Italy's health ministry evaluated the Stamina method. The scientists concluded that "Vannoni's protocol didn't make any sense," Cattaneo says, especially since "he copy-pasted from Wikipedia and other papers." The panel's verdict stopped the clinical trial. But again, the Italian courts stepped in and rejected these conclusions because many of the researchers in the committee had already spoken out against Vannoni before the panel was convened.

Today, the doctors who helped Vannoni in Brescia face charges of criminal conspiracy. And an investigation carried out by Nature demonstrated that Vannoni's 2010 patent application contained images duplicated from previous, unrelated studies. Furthermore, an Italian prosecutor issued a report in April in which he described Vannoni as "the head of a criminal organization." But the biggest victory came in May, when the European Court of Human Rights issued a ruling stating that patients should not receive treatments that aren't supported by scientific evidence. Now, a committee of scientific experts has been asked to evaluate Vannoni's methods once again, and Cattaneo is optimistic. Yet, according to Science, the panel could still propose a clinical trial.

Threats from patients and their families

As she talks about the last two years, hints of emotional fatigue creep up in Cattaneo's voice. Worrying about the man she calls a "charlatan" and his "alchemy" has taken a toll. Many of the researchers who spoke out against Vannoni ended up received threats from patients and their families. For a time, groups of protesters gathered outside Cattaneo's lab. This was mostly fine, she says, until one night she left the university late only to realize that "four people were waiting for me" outside. "I called the police. Everyone thought we were criminals because we didn't want to give this ‘cure' to sick kids," she says.

Many have speculated about Vannoni's intentions, even Cattaneo. "There are two types of charlatans," Cattaneo says, "the ones that want to sell things and fool people, and the ones who are also convinced that what they are doing is right." Cattaneo isn't sure what kind Vannoni is, but says she isn't really concerned by him. "What really concerns me are the institutions and courts who support Vannoni" — not the mention the physicians in Brescia who dispensed these treatments for so long. "Many physicians I spoke to were scared, but none raised their voice — except for a few."

"Many physicians I spoke to were scared."

My own short phone conversation with Vannoni didn't yield any answers. He told me that scientists like Cattaneo have competing interests that impede their ability to judge his techniques objectively, and that people who can't get the treatment are dying as a result. He also tried to convince me that his treatments work and that the scientific method — one that requires control groups, safety testing, and years of study — is flawed. Instead, I wondered if the Stamina method was an elaborate art project meant to demonstrate how far his persuasive communication techniques could be taken. "This is a person that has fooled the country and the patients," Cattaneo says. "We still hope Stamina will be banned from the country."