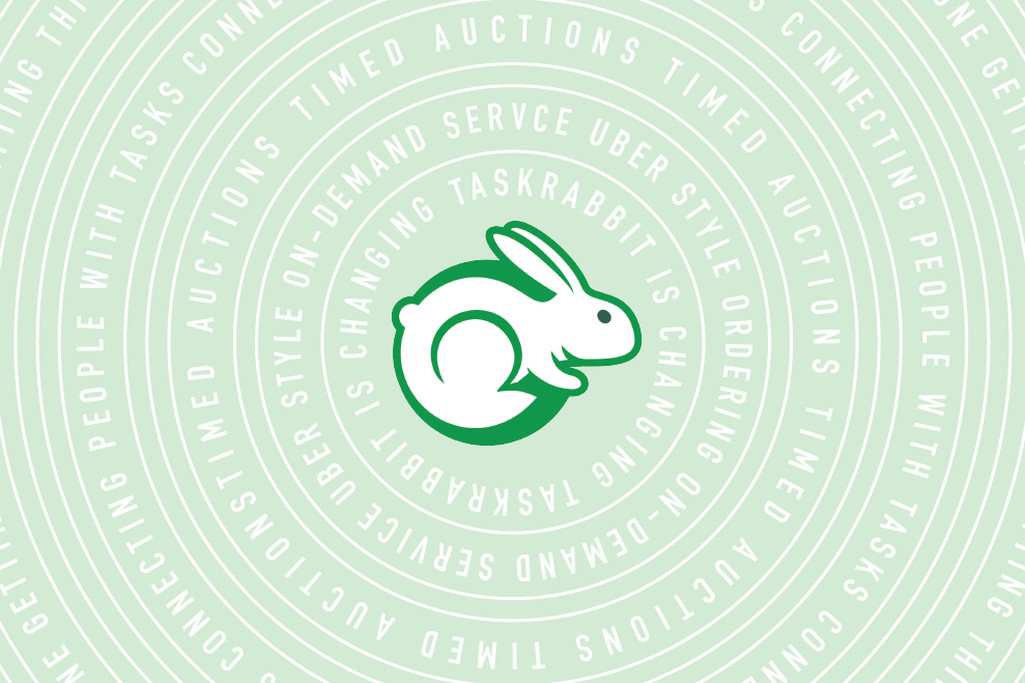 Since it opened up five years ago, TaskRabbit has often been a godsend to people with more money than time. The company stocks its auction house of personal assistants with people ready to deliver cupcakes to your office, or assemble your Ikea furniture, or clean your home. But last summer, executives at TaskRabbit noticed a problem. The percentage of completed tasks posted to the service's auction house had leveled off and was beginning to decline. Individual tasks were seeing fewer bids, indicating frustration on the part of the workers who used the site. The company was stumped: TaskRabbit added 1.25 million users to its system in 2013 and doubled its force of contractors to 25,000. Supply and demand were as big as they had ever been, the company says, but something wasn’t working.

In July, the company reorganized its staff, leading to the layoffs of an undisclosed number of employees. As part of the new structure, TaskRabbit expanded its marketplace operations team, which sifted through the data until they found a likely culprit for the decline. The auction model, in which the company's contractors bid to complete tasks posted by customers, had proven unsatisfying to both. People who posted tasks complained that they never knew what starting price to set and that it took too long for contractors to bid on their jobs. The contractors (which the company now calls "taskers") complained it was taking too long to find jobs — on average, they were spending two hours a week scrolling through endless pages of open tasks looking for matches. 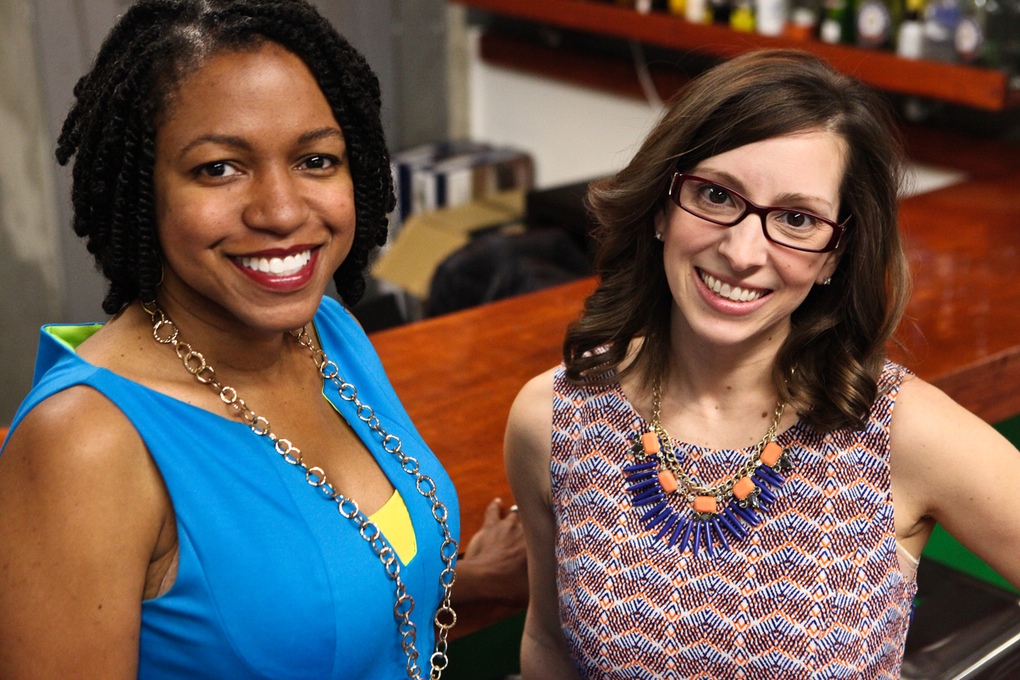 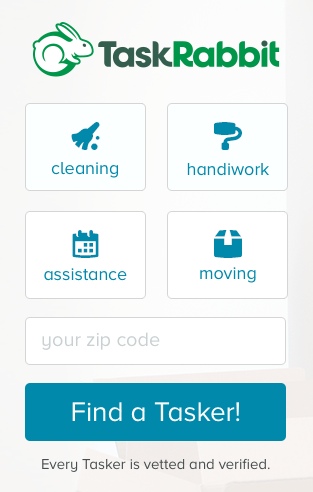 TaskRabbit realized that radical change was needed: it decided to blow up the auction house in favor of a service that looks less like eBay and more like Uber. When the new system goes live next month, users will find a landing page that steers them to the platform's four most popular types of service: handyman, house cleaning, moving, and personal assistants. (You can still request other services, though it takes a few more clicks.) After you submit some details about the job, TaskRabbit will present three contractors, along with their hourly rates, who represent a range of prices and experience levels. After you select one, you can schedule a time for the job and communicate with the tasker in real time using a custom messaging platform built by the company.

The goal of the new system, which at first will be available only through TaskRabbit's website, is to make sure customers can book and schedule a tasker by the time they leave the site. (TaskRabbit earns money by taking a cut of every transaction.) "You know who you’re going to work with, how much you’re going to pay, and you know when it’s going to get done," says Leah Busque, TaskRabbit's founder and CEO. To people now accustomed to summoning taxis with a tap on their smartphone, none of that is revolutionary. But to TaskRabbit, which has raised nearly $38 million in a bid to invent a massive new marketplace for employment, getting here has been a challenge. Its story offers a lesson in how fast our expectations for online services are changing — and how fast those services have to change to meet them.

The original idea for TaskRabbit came to Busque in 2008, when she realized she needed dog food but didn't have time to buy it herself. She built an auction-based marketplace in large part because the model was well tested and familiar. It also fit well with Busque's original vision, which was for neighbors helping neighbors with one-off tasks like dog food delivery.

But as the company grew, the original model came to feel less and less efficient. Peer-to-peer marketplaces like Airbnb, Uber, and Lyft saw enormous growth with a simple fee-based model that was faster and easier to understand for buyers and sellers alike. Meanwhile, TaskRabbit attracted house cleaners, handymen, and other blue-collar professionals used to working at hourly rates. For those workers, the auction model could leave them feeling underpaid. "There was sometimes this discrepancy on how long something would take," Busque says. They would tell her: "I feel like I would have gotten paid more fairly if it had been by the hour."

The company's revenues continued climbing even as its product showed signs of strain. But by last summer, it had become clear to Busque that something needed to change. 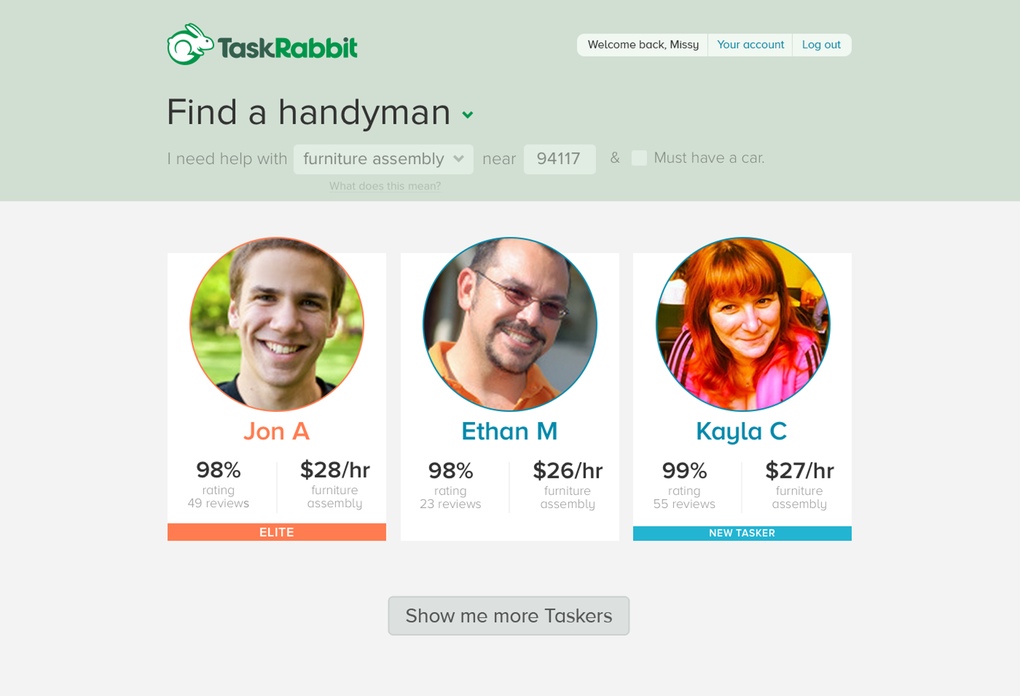 In August, TaskRabbit held a hack day devoted to reimagining the service. "If you started TaskRabbit today," Busque asked her team of roughly 50, "what would the world look like?" A product manager named Andy Jih became interested in what he called an "invitation" model, in which someone posting a task could ask a small handful of taskers for help. After many iterations, that led the company to create its new model, which uses algorithms to instantly match clients with a selection of taskers. Internally, the new model came to be codenamed Booker T.

After building a prototype, TaskRabbit rolled out Booker T in a new market: London, its first international expansion. A handful of employees moved to London for months to prepare for the November launch. Within a few weeks, the data on the new version looked encouraging. The number of users grew three times faster than it did in New York and San Francisco when those cities launched. The number of people who used TaskRabbit more than once was 50 percent higher than in the United States, and the amount customers spent on tasks doubled. Crucially, the percentage of posted tasks that were completed doubled as well — reversing the decline that had led TaskRabbit to investigate alternatives in the first place. "The investment really paid off," said Stacy Brown-Philpot, TaskRabbit's chief operating officer, who oversaw the London project.

Six months later, the company is preparing to roll out the new model to the other 18 cities where it operates. Despite the company's success in London, the move could dismay some domestic taskers: contractors with mediocre rankings are unlikely to surface in a client's top three search results very often, making it more difficult for them to secure jobs. But the company says it's a risk worth taking if it means that clients have a better experience.

As it works to grow, TaskRabbit could face strong challenges from Handybook and Thumbtack, two other fast-growing startups that specialize in connecting people with professional services centered around the home. Four-year-old Thumbtack raised $30 million last month, bringing its total to nearly $50 million; the service is available in all 50 states and has 63,000 businesses using its platform. Handybook, which also offers on-demand housecleaning and home-repair services, said that this month that it raised $30 million in new funding, for a total of $49 million. The service is available in 26 cities.

"These peer-to-peer economies have come out, they're here to stay, they're evolving."

Busque says that as fast as TaskRabbit's market has changed, its five years of experience will give it an edge over rivals. "The bar for quality is incredibly high on TaskRabbit," she says. "And we have so much more history and data." More important to her is that the dream of peer-to-peer marketplaces, which she helped to pioneer, is taking root around the world. "This is as big as the internet coming out, or mobile emerging," she says. "These peer-to-peer economies have come out, they're here to stay, they're evolving. They’re competitive in nature — and that benefits the end user overall."