Facebook Slingshot is much more than a Snapchat clone

Facebook Slingshot is much more than a Snapchat clone

At first, Facebook’s new ephemeral messaging app, Slingshot, feels like yet another Snapchat clone. The free app, available now for iPhone and Android, lets you take a quick photo or video, mark it up with some colorful drawings, caption it with big white text, and then fire it off to a bunch of friends. But then you receive your first message, and you realize this is something completely different.

In Snapchat or any other messaging app, you can view a message as soon as you receive it. But in Slingshot, you can’t view an incoming "shot" until you send a shot back to the sender. "It’s not just about telling your story, it’s about asking others for their story," says Slingshot designer Joey Flynn. In other words, Slingshot makes you trade a photo of what you’re doing before you can "unlock" the picture of whatever your friend is up to. Huh?

The "pay to play" mechanic is difficult to wrap your head around. It’s frustrating, not exciting when a friend sends you a shot and you can’t immediately view it. Slingshot is a new and strange example of a messaging app that raises barriers instead of tearing them down, and increases the friction to viewing a friend’s photo instead of reducing it. But perhaps Slingshot isn’t the "messaging" app we all expected it to be.

Slingshot does let you send a shot to just one person, but the app doesn’t really encourage it. Slingshot’s killer feature is its Select All button, a button Snapchat diehards have begged for that lets you send a photo to all of your friends at once. Snapchat has been adamant about leaving out the much-requested feature, and for a good reason. If you give users the ability to select all, they’ll do it all the time, which potentially lessens the importance of every push notification you get. In my experience testing Slingshot this past weekend, I’ve received a ton of notifications. Facebook tells me that in their testing of the app in a much larger group, they might receive dozens of Slingshot notifications per hour.

But because you have to respond to a shot before you can see it, these notifications act as nags instead of notifiers. If you tap on a new notification, "Shot from Adam," you won’t be able to view it — until you send a shot of what you’re doing back to Adam. Thus, shots feel less urgent than messages, since there’s no expectation that you’ll be able to open them immediately. The app feels far more like a News Feed with push notifications than anything else — except this News Feed requires you to share a post before you can view it, so there’s no place for lurkers.

"We don’t see this as a messaging app," says Flynn. "It’s more along lines of a feed or stream of content because of that pay-to-play mechanic." The bigger idea, says Flynn, is to turn every user into a creator that posts more than they might on Facebook — because "unlocking" your friends’ posts requires you to post back. "[Venture capitalist] Fred Wilson once said that the cardinal rule of social networks is that one percent of people create content and 90 percent of people consume it," says Flynn, "and we want to flip that on its head." Snapchat proved that people would share more if their messages disappeared, and if they felt unhindered and candid. Nobody would’ve expected, however, that Facebook would have applied Snapchat’s ephemeral flavor to posts in a feed instead of to messages, and then forced people to post if they want to receive messages.

"We don’t see this as a messaging app... It’s more along lines of a feed or stream"

Slingshot’s "feed" itself is a pleasure to use, though it doesn’t look like a conventional feed. Every time you send a shot to a bunch of friends, the app immediately pops up all the shots you’ve just unlocked from those friends. Swiping through a batch of shots you’ve unlocked feels like an idealized version of the Facebook News Feed where every post is meant for you, appears full-screen, and disappears once you’ve read it. The feed is in fact not so different in looks from Facebook Home’s "Cover Feed," which was also designed by Flynn, or Paper’s News Feed, except the shots you’ll see in Slingshot feel a lot more special and original. These are moments too candid to post your 500 Facebook friends, and moments you might have otherwise texted or snapped to a friend — and Facebook realizes that.

"We had this in back of our heads early on, that it’s this place where everyone is creating with people, and so maybe I’ll share more because I haven’t thought of this as a ‘shareable moment," says Flynn. "This is a place where I can share a lot of things going on with my life." Another important differentiator between Slingshot and Facebook is that Slingshot has no comments. The app does, however, let you react to shots you’ve unlocked by tapping on them. The ability to quickly react to a post with a selfie or text comment is one of the app’s best features, and I could see it making its way into many other kinds of apps in the near future. And fortunately, friends’ reactions to your shots are always unlocked and ready to view. 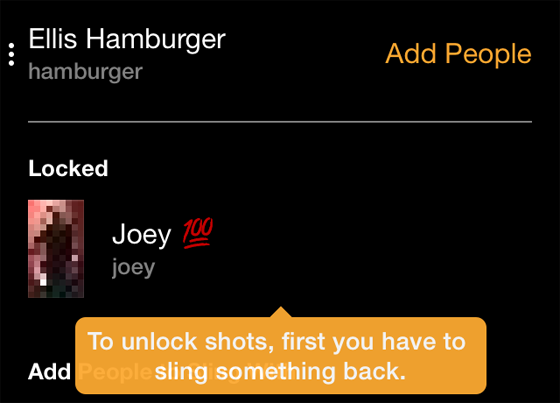 Slingshot is filled with many charming, original ideas. All the polish you’d expect from Facebook is here, from the app’s overall speed to its ultra-slick animations and images that de-pixelize stylishly as they open. Also, the app thoughtfully challenges our assumptions about the differences between "posts" and "messages" in the future of social networking apps. But, the company might have bitten off a bit more than it can chew with its pay-to-play mechanic.

Slingshot should appeal to users who are seeking an outlet more casual than Instagram and less formal than Facebook, but I think most other people are going to stop dead in their tracks when they find out about Slingshot’s unique requirement: you have to send a photo before you can open the one you’ve received. This will be especially confusing because the app feels so much like Snapchat that it’s easy to forget how you’re supposed to be using it. Slingshot’s trademark feature will certainly incentivize sharing, but has Facebook considered that you might not always have something to share?

Update: As of June 25th, Slingshot is rolling out internationally beyond the United States.