Track your cash like calories with this new smart wristband concept

Ambitious start-ups like Coin want to replace the plastic credit and debit cards that take up space in your wallet. But what if they did away with your wallet altogether? Design firm Artefact has developed a wristband concept that tracks the user's financial information and spending. Called Token, the device would make it easy to tell when you go over budget and transfer funds over the air.

Judging from the product's mockups, the Token would closely resemble a Fitbit in design. But instead of recording fitness data, the device would sync with the owner's checking and credit accounts. Users would first need to enter a password on the device's touchscreen and scan their fingerprint to access their accounts. From there, funds can be transferred over Bluetooth to vendors and, from one mock, via fist bump to a trusted friend. 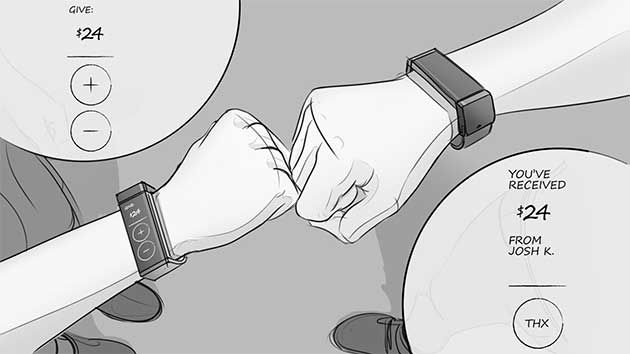 Bloomberg Businessweek reports that chief designer Craig Erickson has no plans to make the Token a reality, since that would require infrastructure Artefact isn't prepared to build. Instead, it serves as a means of pushing the industry to move in this direction.