Yahoo details its mostly-male employee diversity for the first time

Share All sharing options for: Yahoo details its mostly-male employee diversity for the first time

Yahoo today became the latest tech company to reveal the gender and ethnic demographics of its employees, disclosing that the majority of those workers are white males. Yahoo's broken down both gender and ethnicity profiles for its 12,200 employees globally and in the US where the company is headquartered. It's also detailed those genders and ethnicities across its tech workers, non-tech workers, and leadership group, which comprises predominantly of white males.

Yahoo's report follows those from Google and LinkedIn, which have both published similar reports detailing the makeup of their respective workforces, and — like Yahoo — are mainly white or asian males. Google was the first to reveal its numbers, saying that it was far away from where it wanted to be on diversity, and that making the information available would shed light on the issue. Even so, the company noted that part of the problem stemmed back to education, with far fewer women, blacks, and hispanics earning computer science degrees in the US, a problem that's compounded with issues surrounding work visas for would-be foreign employees.

Hard to compare the three companies

Results from the three are difficult to compare primarily because of size. Google employs nearly 50,000 people globally, which is more than four times the size of Yahoo. LinkedIn, meanwhile has about 5,400 employees. Nonetheless, Yahoo and LinkedIn are more similar, with women in both companies coming in at less than 40 percent of overall employees. The two companies also had very close white and Asian ethnicity makeup among its US employees. 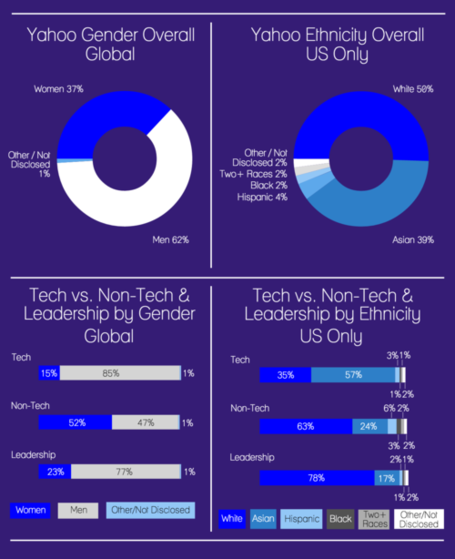 "Here at Yahoo we are committed to attracting, developing and retaining a diverse workforce," Jackie Reses, Yahoo's chief development officer, said in a post announcing the figures. "Overall, our goal at Yahoo is to create a workplace culture that attracts and retains all talents, regardless of background, and to help our people grow to their full potential."

Yahoo is currently led by Marissa Mayer, who left Google to become the company's second female CEO in 2012. She replaced Ross Levinsohn who was the company's interim CEO. Just the year before, the company had unceremoniously given CEO Carol Bartz the boot by telephone, then followed that up by hiring Scott Thompson who was himself ousted amid a faked resume letter scandal.