The Amazon smartphone is here: meet the Fire Phone

Share All sharing options for: The Amazon smartphone is here: meet the Fire Phone

Amazon doesn't just sell smartphones anymore — it makes one. In news that should surprise exactly no one, Jeff Bezos has officially unveiled Amazon's first cellphone, the Fire Phone. It'll be available July 25th, exclusively on AT&T starting at $199 with a two-year contract, and it's perhaps the most futuristic and wide-ranging device Amazon has ever attempted.

The Fire Phone has a 4.7-inch, 720p display, aluminum buttons, a Qualcomm processor, Adreno 330 graphics, and 2GB of RAM. It's 0.35 inches thick, and weighs 5.64 ounces. Bezos talked a lot about the phone's build, from the injection-molded connectors to the chamfered edges. There's a set of stereo speakers that Bezos promised are better than your average phone, and a set of headphones he swears that won't tangle. (That last bit sounds impossible, but we'll have to wait and see.)

4.7-inch screen, with great speakers and a great camera

There's also a 13-megapixel camera, an f/2.0 lens, and optical image stabilization. Bezos compared the Fire Phone to the iPhone 5S and the Samsung Galaxy S5, saying that no matter the situation the Fire Phone will take better shots. There's a quick-access shutter button on the side, and unlimited cloud storage for your photos. That's where Amazon has an advantage, really, its ability to do cloud storage cheaply and well.

It runs Amazon's Android-based Fire OS 3.5, with a couple of new tweaks. The carousel of recent items is still foremost on the device, but there are "active widgets" underneath showing recent activity in those apps as you swipe through them. Everywhere else, there's a three-paneled design: one for navigation, one for your primary content, one for what Bezos called "a delighter," things like song lyrics in the music app.

"Once you get really good at finding heads, you're going to find them a lot of places you don't want to find them"

Bezos' presentation was oddly focused on art history and perspective, two things that don't obviously have anything to do with smartphones. But on the Fire Phone, four front-facing cameras team up to create "dynamic perspective," a head-tracking tool that changes the phone depending on how you look at it. But 3D doesn't just stop there: Bezos showed how things change in Maps, looking for a restaurant and at the Empire State Building and changing the view every time he tilted his phone. It's also part of the navigation of the device — a tilt of the phone opens up a navigation drawer, or scrolls through options. It gives good demo, but we'll have to see how it works in practice. 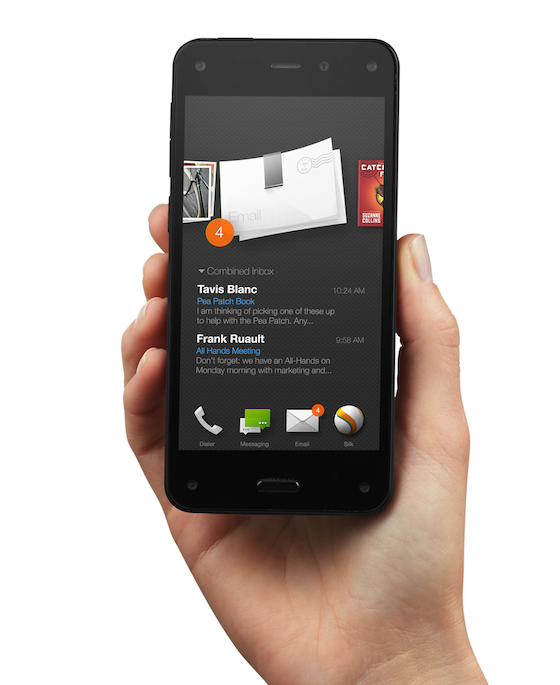 Of course, the Fire Phone is designed to work with Amazon's many services. There's X-Ray for seeing information about what you're watching, an AirPlay-like system for sending video to your TV, and the neat ASAP feature that caches video you might want to watch so it can start streams instantly. And there's Prime Music, Prime Video, and more. For reading, there's Amazon's Immersion Reading, and WhisperSync for Voice, that cool app for switching between reading and listening to a book at will. This is, let's not forget, an Amazon phone.

During the presentation, Bezos played a video of a series of people who either didn't know how to use their phone or didn't know all the things it could do. Amazon's answer? MayDay, the ultra-simple and ultra-friendly 24-hour customer service tool that lets you quickly get answers to any and all problems with your Fire Phone.

But chief among the Amazon-friendly features on the Fire Phone is Firefly, the tool that automatically recognizes basically everything the phone looks at and hears — Bezos quickly demoed the feature with a DVD, detergent, a song that was playing, and more, and the phone almost immediately gave him a way to buy everything. It's not a new feature, even for Amazon, but it appears to be deeply integrated in the Fire Phone.

The announcement comes after weeks of buildup, including an open invitation from Amazon to an event showcasing "an amazing new device," a teaser video filled with people having their minds blown by a device that was just off-screen, and a, well, unique package from Amazon last week. Rumors of the company's smartphone ambitions began more than two years ago, and there has likely been a phone for that long — recent reports say the phone has been heavily delayed. But it's here now, the star of the Seattle event Amazon threw for press, buyers, and developers.

"We asked, how would it be different? Can we build a better phone for our most engaged customers?"

During the announcement, Bezos took time to mention that when Amazon first launched the Kindle, it was met with something of a tepid response. That has, he took care to note, changed in a big way. The same thing happened with Kindle tablets, he said — and he not-so-subtly implied that the same might happen with the new phone.